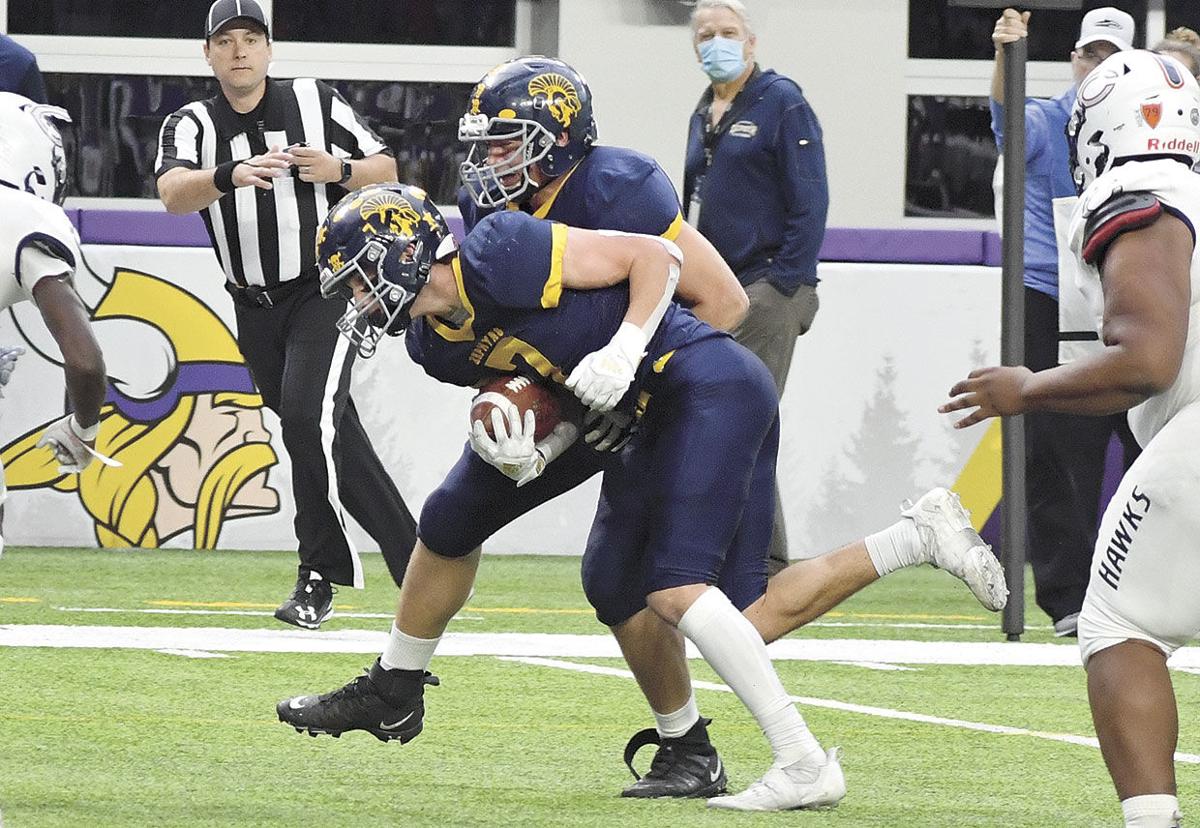 Jordan Hull drives toward the end zone for a touchdown during the first half of the Mahtomedi state semifinal victory over Cooper. 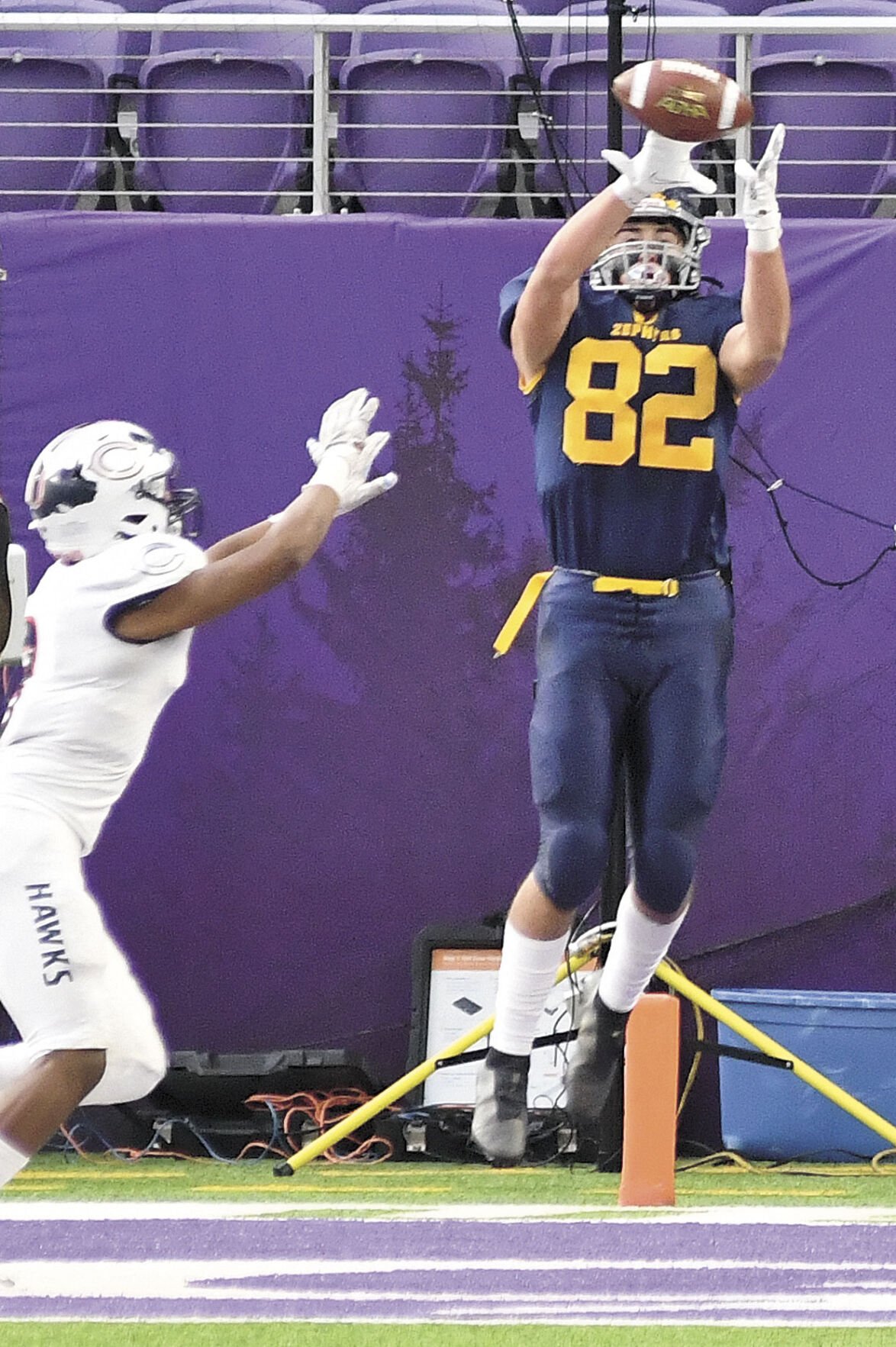 Ramsey Morrell pulls in pass from Charles Brandt for a touchdown. 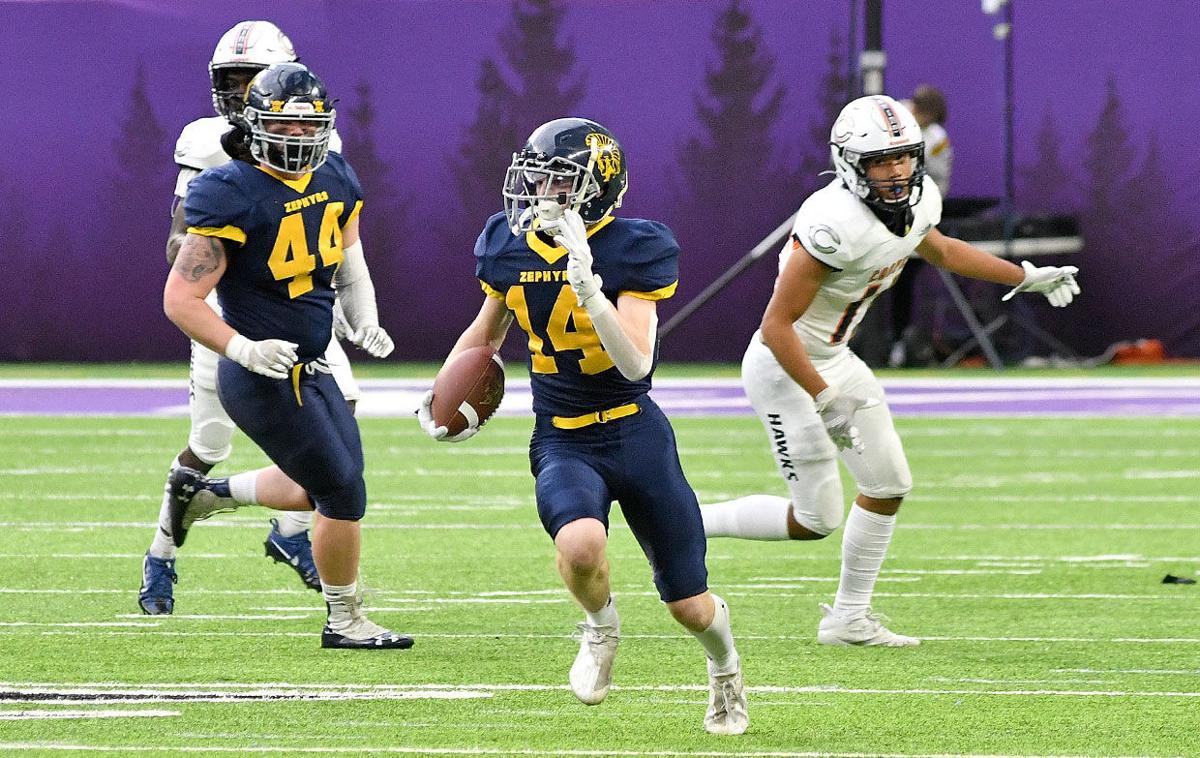 Gunnar Woods returns a punt to put the Zephyrs in good field position. He also intercepted a pass in the third quarter and sped 68 yards for a touchdown. 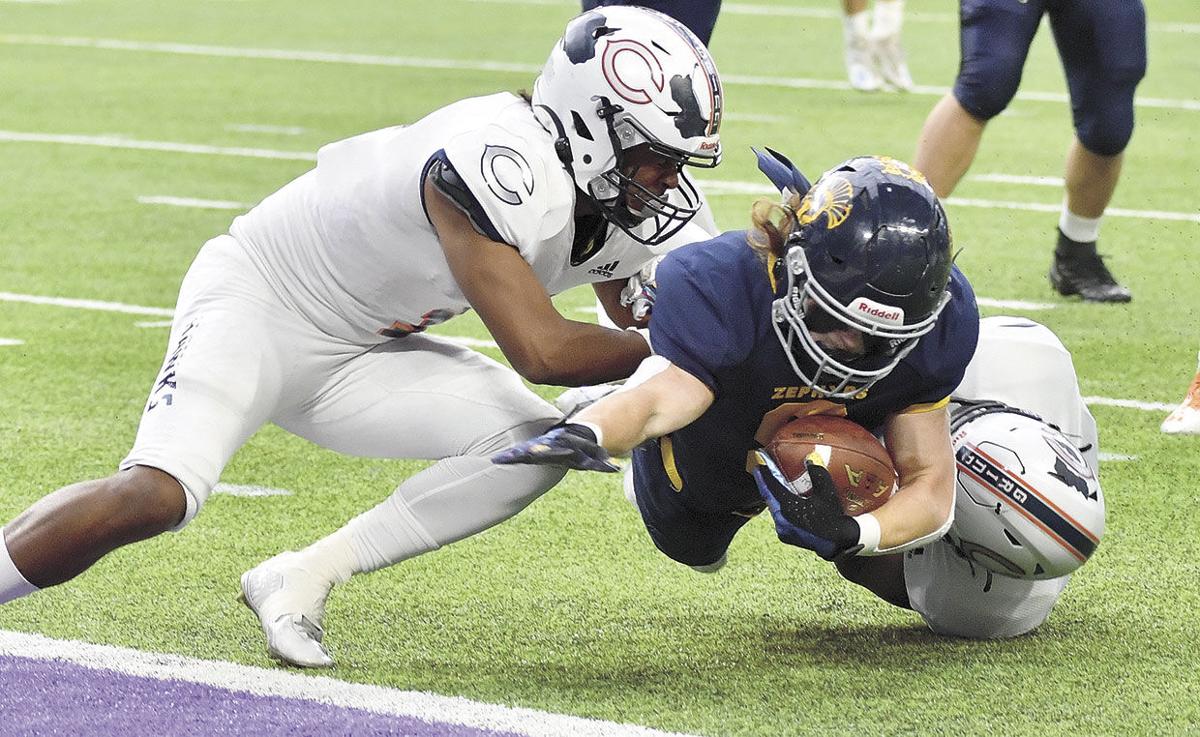 Nicholas Beiersdorf reaches forward as he drags a couple of defenders toward the goal line.

Mahtomedi High School students cheer on their team at US Bank Stadium in Minneapolis.

Jordan Hull drives toward the end zone for a touchdown during the first half of the Mahtomedi state semifinal victory over Cooper.

Ramsey Morrell pulls in pass from Charles Brandt for a touchdown.

Gunnar Woods returns a punt to put the Zephyrs in good field position. He also intercepted a pass in the third quarter and sped 68 yards for a touchdown.

Nicholas Beiersdorf reaches forward as he drags a couple of defenders toward the goal line.

Mahtomedi High School students cheer on their team at US Bank Stadium in Minneapolis.

Facing a team that had just lost its star quarterback, the Mahtomedi Zephyrs cruised into the Prep Bowl with a 33-7 conquest of Robbinsdale Cooper in the semifinals Friday.

The Zephyr special teams gave the offense great field position all game, and the defense provided a touchdown, in the rout at U.S. Bank Stadium.

Mahtomedi (10-2) advances to the Class 5A title game next Saturday, 4 p.m., against the winner of Mankato West vs. Rogers, who’ll duel Saturday night.

“This is what we’ve been talking about since we started playing together in elementary school,” said senior receiver Ethan Loss.

The Zephyrs had prepared for a Cooper offense triggered by Joe Russell, who fired 28 touchdown passes this season. “Cooper is very quick and athletic. They have a very good quarterback, tight end, receivers, and running back,” coach Dave Muetzel had assessed earlier in the week. Asked when they realized Russell wouldn’t be playing, Muetzel said, “When somebody else took the first snap.”

Instead, it was the outstanding tight end, Jaxon Howard, filling in. The Zephyrs intercepted three passes by Russell, who said his last QB duty was in eighth grade. One of the pickoffs was returned for a touchdown by Gunnar Woods.

“When you find out Wednesday morning,” lamented Cooper coach Willie Howard, “that your quarterback — and I’ve been telling everyone he’s the best quarterback in the state, and I wasn’t lying — when you find out he can’t play, that adds a little adversity.”

Russell had suffered a lower leg injury late on their 21-17 quarterfinal win over Alexandria and the Zephyr coaches were not aware of it. Russell needed emergency surgery, coach Howard said, and they found out Wednesday he was not cleared to play.

“At the same time, we make no excuses,” Howard added. “The expectation is to go out there and win.”

Howard turned the reins over to his son Jaxon, a strapping junior regarded as an outstanding tight end and defensive line prospect. So they didn’t have Jaxon’s services at those positions, either, along with not having their QB.

Still, it would have taken a huge game offensively for Cooper to keep up with the Zephyrs, who took advantage of great field position while committing no turnovers. The Zephyrs fumbled three times in the first half but recovered all of them.

“Hats off to Mahtomedi; that’s a great program, with great coaching. They do things right,” coach Howard said.

Mahtomedi’s Joey Heinsch boomed all six kickoffs into the end zone. The Zephyr touchdowns, on their first three series, all came on short drives, set up by nice punt returns after the defense quickly forced punts. Woods darted 27 and 17 yards on punt returns and Cory Bohmert had a 15-yard runback.

“Our special teams have been very good all season,” Muetzel said. “It’s a huge advantage when we can start up there after a punt or kick return. And having a kicker who can kick it into the end zone is pretty special.

The Zephyrs led 7-0 on Charles Brandt’s one-yard sneak, two plays after he hit Loss for 15 yards on a fourth-and-four play. Jordan Hull got the next touchdown on a seven-yard run; he lost the ball just before the goal line but recovered in the end zone. It was 14-0 after one quarter. Brandt’s four-yard toss to Ramsey Morrell made the score 21-0 in the second quarter.

Woods gave his team a four-touchdown lead when he swiped a pass and had an open field for a 68-yard dash to the end zone in the second quarter.

The last six points came from Heinsch on field goals of 33 yards in the second quarter and 38 yards in the third quarter. The stellar senior kicker had best game of the season in the friendly indoor confines, also going 4-for-4 on conversions and never allowing Cooper to return a kickoff. Given Cooper’s team speed, the touchbacks were a luxury for the Zephyrs.

Cooper (9-3) averted the shutout with two minutes left against the Zephyr backups on a four-yard touchdown by Camden Royal, who finished with 1,492 yards and 17 TD’s.

Until then, the Zephyrs shut down Cooper and its emergency quarterback, who completed eight of 18 for 86 yards. A 35-yard run by Royal was Cooper’s only big play.

Loss and Jake Larson made the other interceptions. Junior lineman Cody Dvorak led Mahtomedi in tackles with seven. Loss made five tackles. JP Johnson made four, including two for losses.

Brandt completed five of nine passes for 42 yards with no interceptions, putting the sophomore QB over 1,000 yards (he’s got 1,048 and nine touchdowns). Loss caught three for 33 yards. Nicholas Beiersdorf carried 15 times for 77 yards. Hull carried 11 times for 34 yards and his 16th touchdown.