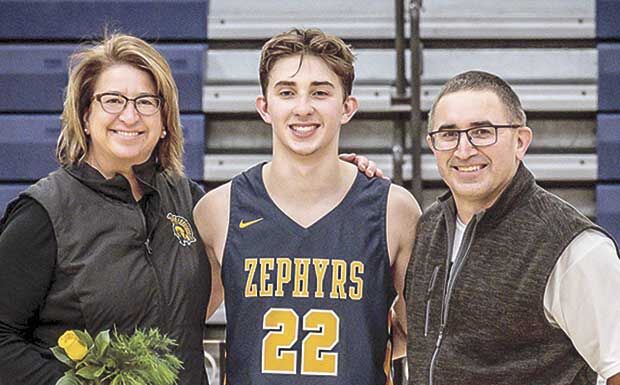 Kyle Oswald with his parents, Jean and Matt Oswald. 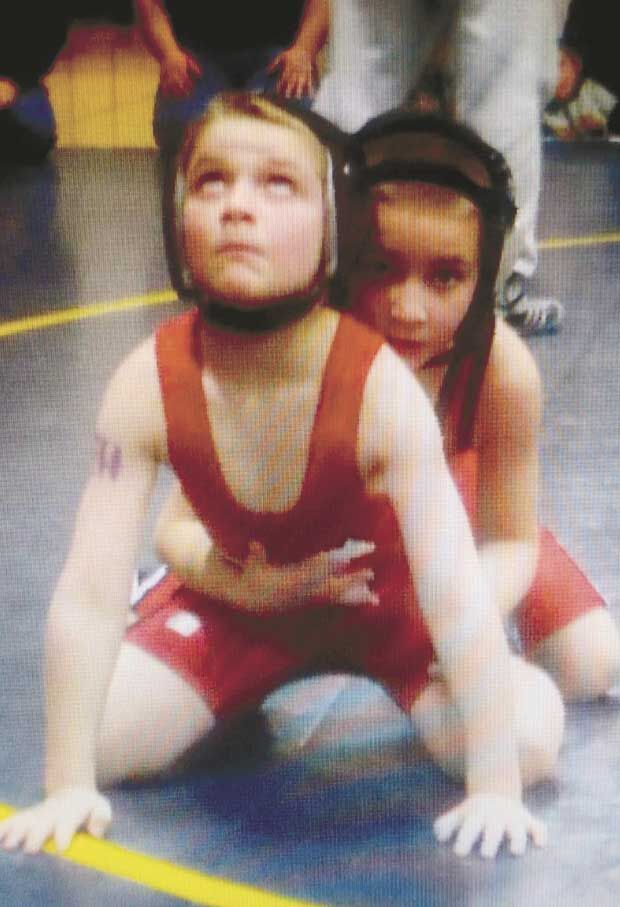 Kyle Oswald with his parents, Jean and Matt Oswald.

Mahtomedi’s wrestling coach was an avid fan of the Zephyr boys basketball team, and the basketball captain always followed the wrestling squad closely.

That’s because Matt and Kyle Oswald are father and son. It’s an unusual situation.

“I do not know of any other wrestling coaches with a basketball player son,” said Matt Oswald, head coach of the Mahtomedi High School wrestling team.

Kyle Oswald, a senior who plays football, baseball and basketball, was a wrestler himself from kindergarten through fourth grade. He competed in the state youth tournament every year and placed fourth his last year.

“I would have loved to have been able to wrestle in high school,” he said, “if it did not interfere with basketball.”

A couple friends invited Kyle to basketball tryouts back then.

“He gave it a try. He made the top traveling team and scored double digit points in the first game,” Matt said.

By fifth grade, Kyle was in basketball only. One reason: he had been a Mahtomedi student wrestling with Stillwater’s youth program. Matt was coaching in Stillwater at the time and Mahtomedi didn’t have a program.

“Kyle said he would keep wrestling unless he made the traveling basketball team,” Matt said. “It was difficult for me at first, but I knew that it was not going to work long-term if I forced Kyle to go to wrestling.  He liked wrestling, but had no friends from school on the team. Basketball was an opportunity to do competitive sports with his friends from school.”

Kyle played JV last year and was a top sub on varsity this year, averaging 4.9 points on a 13-5 team while spreading the ball and playing stout defense. “I am a captain, so I do whatever I can to help the team,” he said.

Which meant a lot of nights away from home for Matt, either coaching wrestling or watching hoops. It worked out well, with basketball usually on Tuesday and Friday and wrestling on Thursday and Saturday. During rare occasions when both were competing the same night, Matt got basketball updates via texts from his wife.

“During the pandemic, I have also been able to watch a couple of his games on YouTube — on our bus ride home or in between duals,” said Matt, who’s a mathematics teacher. “It is awesome being able to be part of so many athletic events at Mahtomedi either as a coach or fan. There have been several weeks this season where I have been coaching or cheering on the basketball team four nights.”

Kyle is a close friend of star wrestler Ian Wilsey, going back to their days wrestling together in Stillwater. They are longtime football and baseball teammates, along with another close friend, Tony Neubeck.

“Before COVID, I would attend wrestling meets whenever basketball or school permitted,” Kyle said. “When I was much younger, I remember traveling around to every meet and practice when my dad was coaching at Stillwater. I really enjoy watching high school meets and going to the Sports Pavilion to watch Minnesota Gopher wrestling meets.”

Matt was a three-sport athlete himself, competing in football, wrestling and baseball at West Bend High School in Wisconsin.  While he didn’t get to coach Kyle in wrestling, he is an assistant coach on the football team, where his son was a two-year starter at outside linebacker and placekicker.