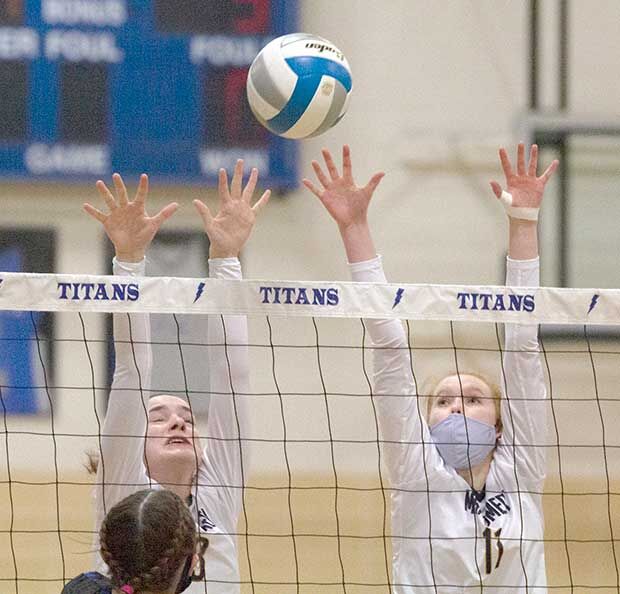 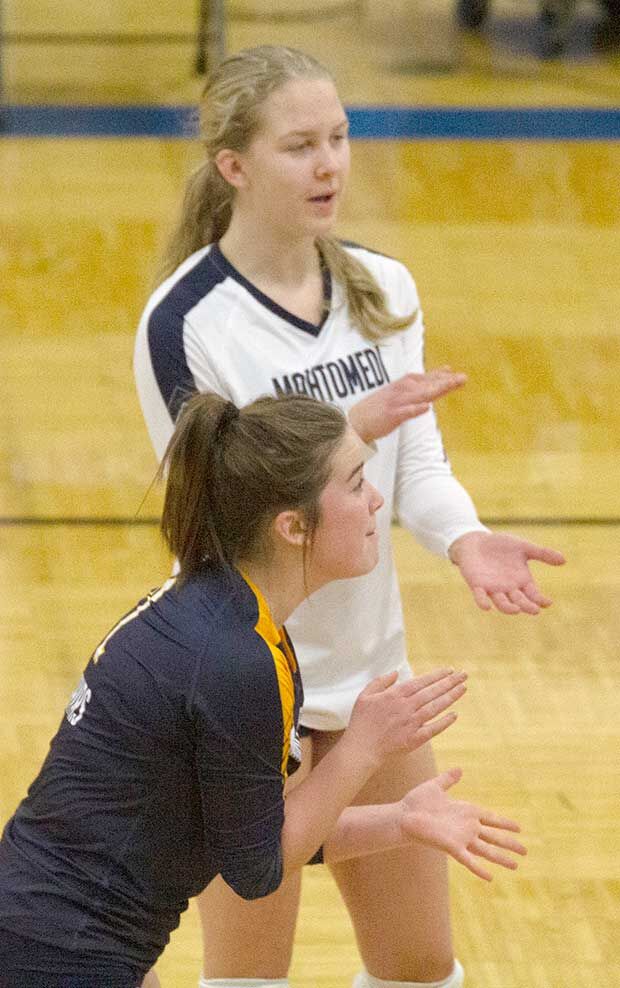 Erin Noel and Jenna Elbers clap encouragement to teammates during a match at Tartan. 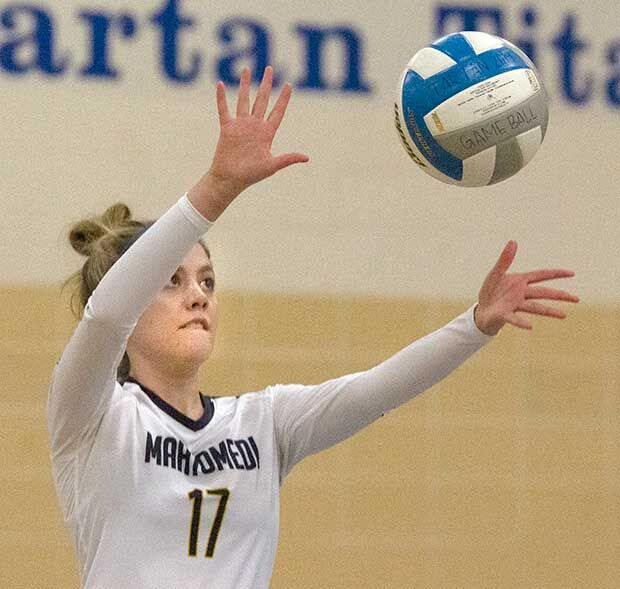 Irene Azcona cranks up to serve against Tartan. 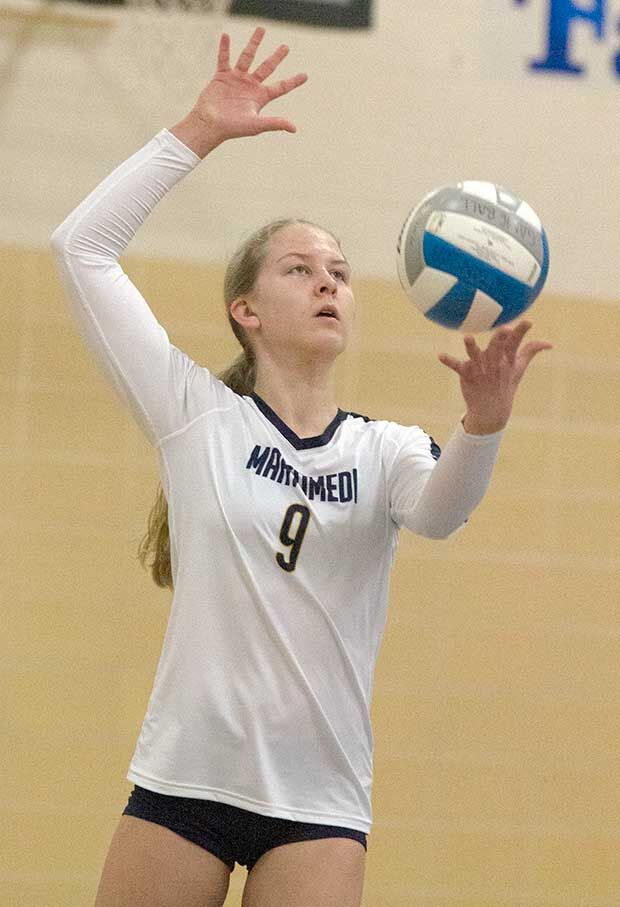 Jenna Albers tossed up a serve against Tartan. 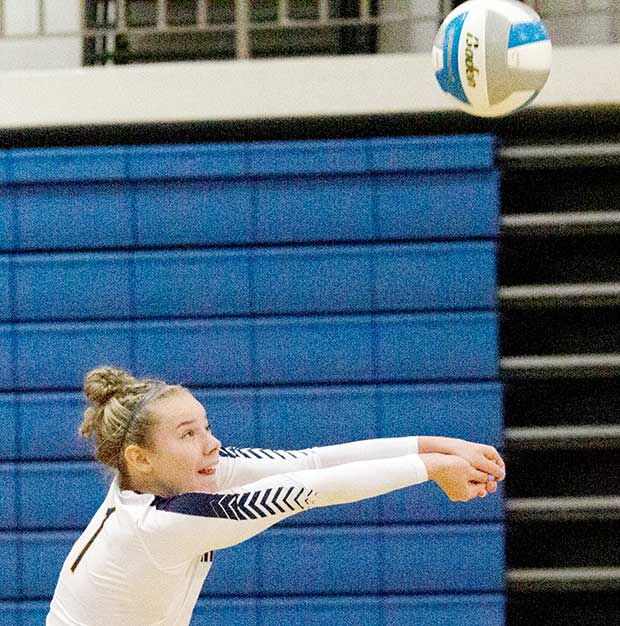 Erin Noel and Jenna Elbers clap encouragement to teammates during a match at Tartan.

Irene Azcona cranks up to serve against Tartan.

Jenna Albers tossed up a serve against Tartan.

The Mahtomedi volleyball team finished a challenging 2020 season with a 2-9 record, dealing with constant lineup changes and doing their best to keep everyone safe during the COVID-19 pandemic.

With all the varsity players missing matches, the Zephyrs posted their wins over South St. Paul and Hastings early the season, and finished with losses to Tartan 3-1 and Henry Sibley 3-0 on Nov. 19 and 20, both on the road.

“We celebrate progress in the midst of the pandemic. We had different lineups and unexpected changes almost every day,” coach Angela Helle said.

“Each day, we never knew what to expect. In spite of everything changing daily, the girls were resilient. One word that comes to mind from this season is resilience.”

Helle said the seniors “showed great leadership in the midst of it all.”

The Zephyr seniors were Elizabeth Mosley, who had an excellent five matches while missing six; Jenna Elbers, who led the team in kills; Greta Schiminoski, who hit in all three positions (“Each night, she had to ask us where to warm up,” the coach said); Ellie Hansen, their top middle blocker; Isabelle McGraw, the setter and offensive leader; and Irene Azcona, defensive specialist and a strong server.

“This season was very interesting for the team, but I'd say even more so in my personal experience,” said Mosley. “I missed six of the eleven matches the team played. For the games that I did play in and the practices I attended, I'd say that I played well.”

That she did. Mosley appeared on the MN Volleyball Hub leaderboard for digs, aces, and kills, before her second quarantine, and was second with 26 aces.

Her last game turned out to be Senior Night on November 6 against North St. Paul. “I was in quarantine for the last two weeks of the season and missed playing in our last game by just two days.”

Still, she reflected: “I’d say that everyone was very thankful to be playing this fall, and that stayed in our minds for the entirety of the season. I definitely went into each practice and game with the mentality that this might be one of the last days I get to play volleyball in high school. Things were so uncertain, so I gave my all each day.”

She added that the Zephyrs “got along really well” and always had each other’s backs.

The pandemic loomed over the team through the summer and fall. The season was initially moved to spring; then, plans changed and it started six weeks late in the fall.

“Over the last few months, the situation with COVID has continued to change every day,” said Elbers.

“Because of this, I was extremely grateful to get a season at all. For me, volleyball has always been an escape from all the stressors in my life — where I could just play my best and have fun — so I’m so glad I still had the opportunity to play this year.”

Over the season, everybody on the varsity had to quarantine for at least two weeks, Elbers said

“This made it pretty hard for our team to find consistency, for people were playing different positions every match. It was definitely frustrating at times, when connections weren’t there on plays.”

On the upside, all the inconsistent lineups “actually broadened our skill ranges,” she said, and made them more flexible players.