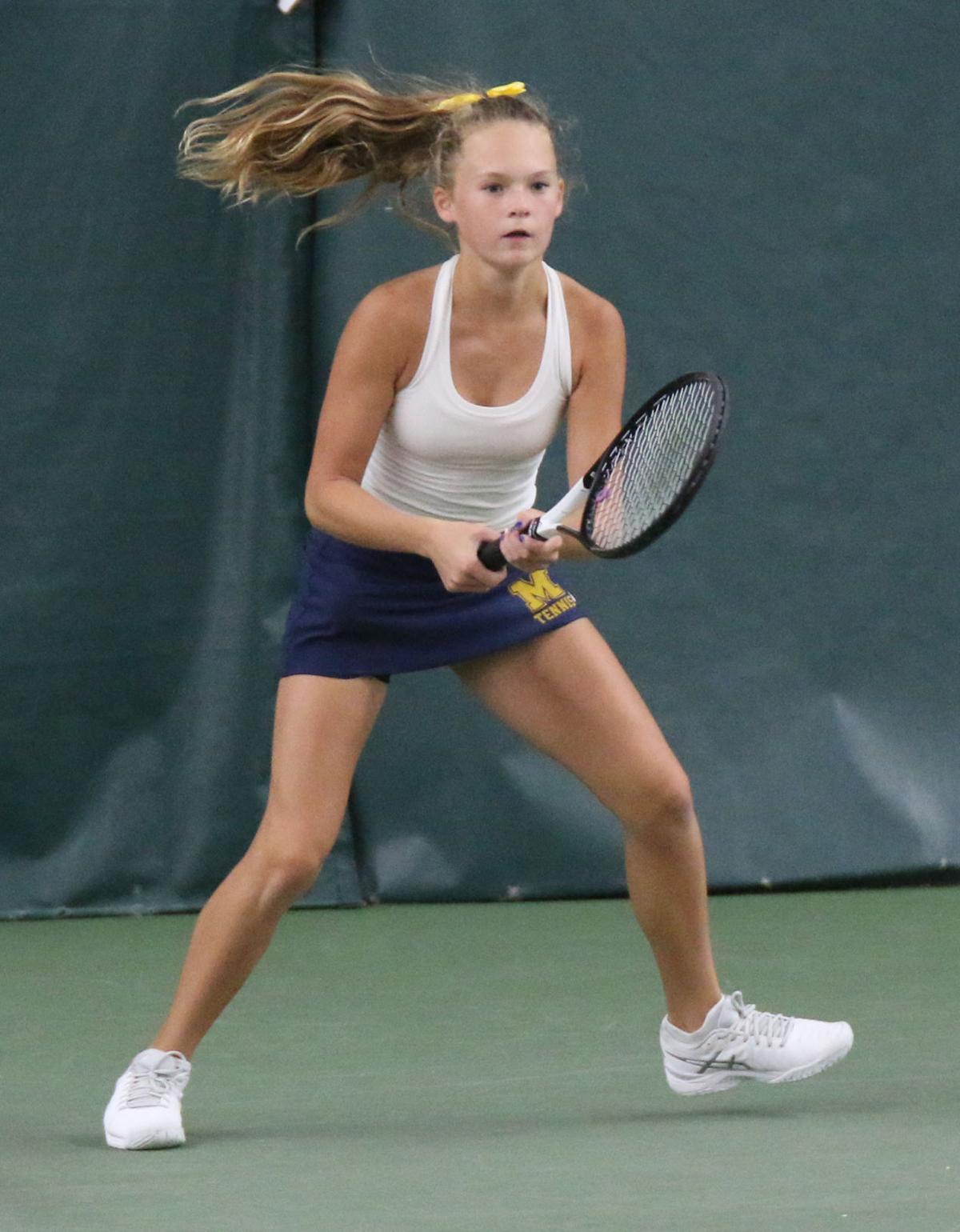 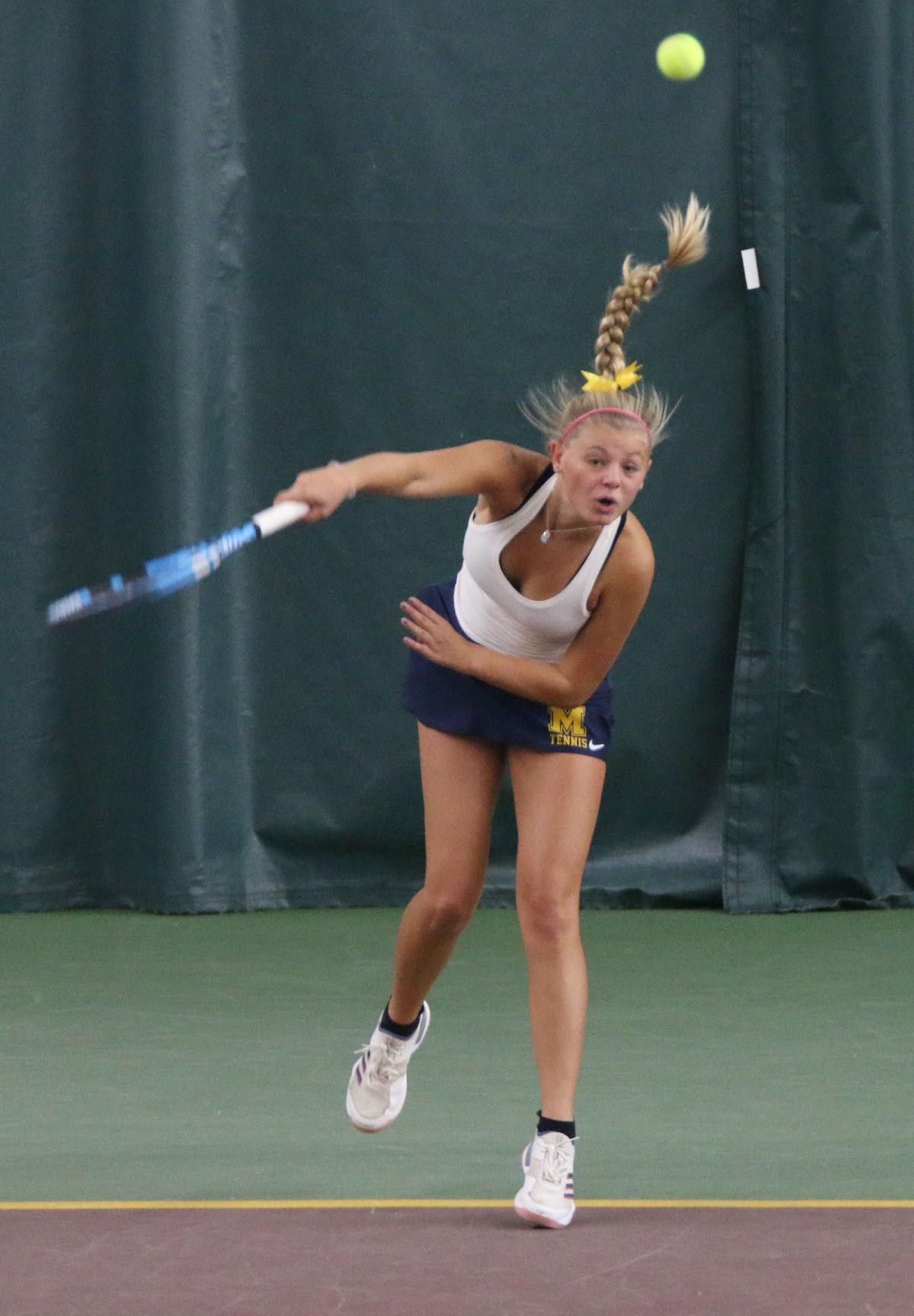 Annika Munson will be Mahtomedi’s lone representative at the state tennis tournament to cap an outstanding season by the No. 3 ranked team in the state.

Munson beat her teammate Lauren Splett 7-5, 6-1 in a true-second match Tuesday to qualify for state as runner-up, after both of them lost Roseville Area’s Nicole Ridenauer, the champion, in the Section 4AA singles tournament at the University of Minnesota.

Munson, an eighth-grader who also qualified for state last year, takes a 24-4 record into state singles starting next Thursday at the U of M. Splett finished her junior year 23-5.

It was, said their coach Aaron Freer, “an unusual showdown between teammates for the last remaining spot for the state tournament” — and two very evenly-matched teammates at that, who alternated all year between 1-2 singles.

Asked how the two friends handled it, the coach said, “I think as well as possible. A tough spot for the competitors and spectators, knowing that only one will go to state pending the outcome of that match.”

The first set was ”back and forth, full of good tennis and laced with emotion,” Freer said. Munson pulled away at the end and carried her momentum into the second set.

In doubles, both Mahtomedi teams won twice and fell in the quarterfinals. (See below)

Munson, seeded fourth, and Splett, seeded second, each breezed through two rounds on Thursday. In quarterfinals Monday, Splett foiled No. 7 Makenzie Weber of St. Anthony 6-2, 6-1. Munson topped Alexina Erickson of White Bear Lake (who had upset the No. 5 seed) 6-0, 6-0.

In the semifinals Tuesday, Splett repelled No. 3 Natalie Ennett of Centennial 6-0, 6-1. Munson was pitted against top-seed Ridenauer, against whom she had a 3-3 record in six USTA matches. Ridenauer won this one 6-3, 6-0. Munson started fast, leading 3-0 in the first set, but Ridenaur won the next 12 games. Munson, up 3-1 and 40-30, double-faulted and lost the game, a turning point.

In the first-place match Tuesday, Ridenauer defeated Splett 6-2, 6-1 while Munson won the third-place match over Ennett 6-0, 6-0. Because Munson had not faced Splett in the tournament, she played a true-second match against her teammate.

Mahtomedi entered its four seniors in doubles competition. Both teams won their first two matches on Thursday. “Mahtomedi was the only team in the section where all six (entries) reached the quarterfinal round,” Freer said.

Elena Carlson and Sarah Hoffman were seeded fifth. Centennial’s Quinn Bliss and Mia Troska, seeded fourth, beat them 4-6, 7-6 (7-4), 6-2 in the quarterfinals. The Zephyrs won the first set led the second 4-1 before the Cougars won two close games and seized the momentum. Carlson finished 19-6 and Hoffman 18-7.

Chloe Irvine and Annika Hillstrom were seeded sixth. Stillwater’s No. 3 seeded Jana Myers and Molly Anderson beat them 6-0, 6-2 in the quarters. The Zephyrs led 2-1 in the second set. A long back and forth deuce game that would have put the Zephyrs up 3-1 went Stillwater's way, and with it the Ponies took all the momentum. Hillstrom was 16-9 and Irvine 13-6 for the season.