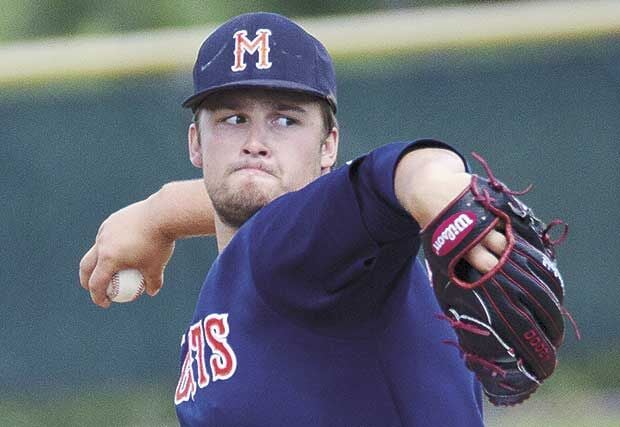 Mahtomedi graduate Austin Jerylo, shown here in a 13-3 win over Tri-City Sharks, is a pitcher and third baseman for the Metro Knights 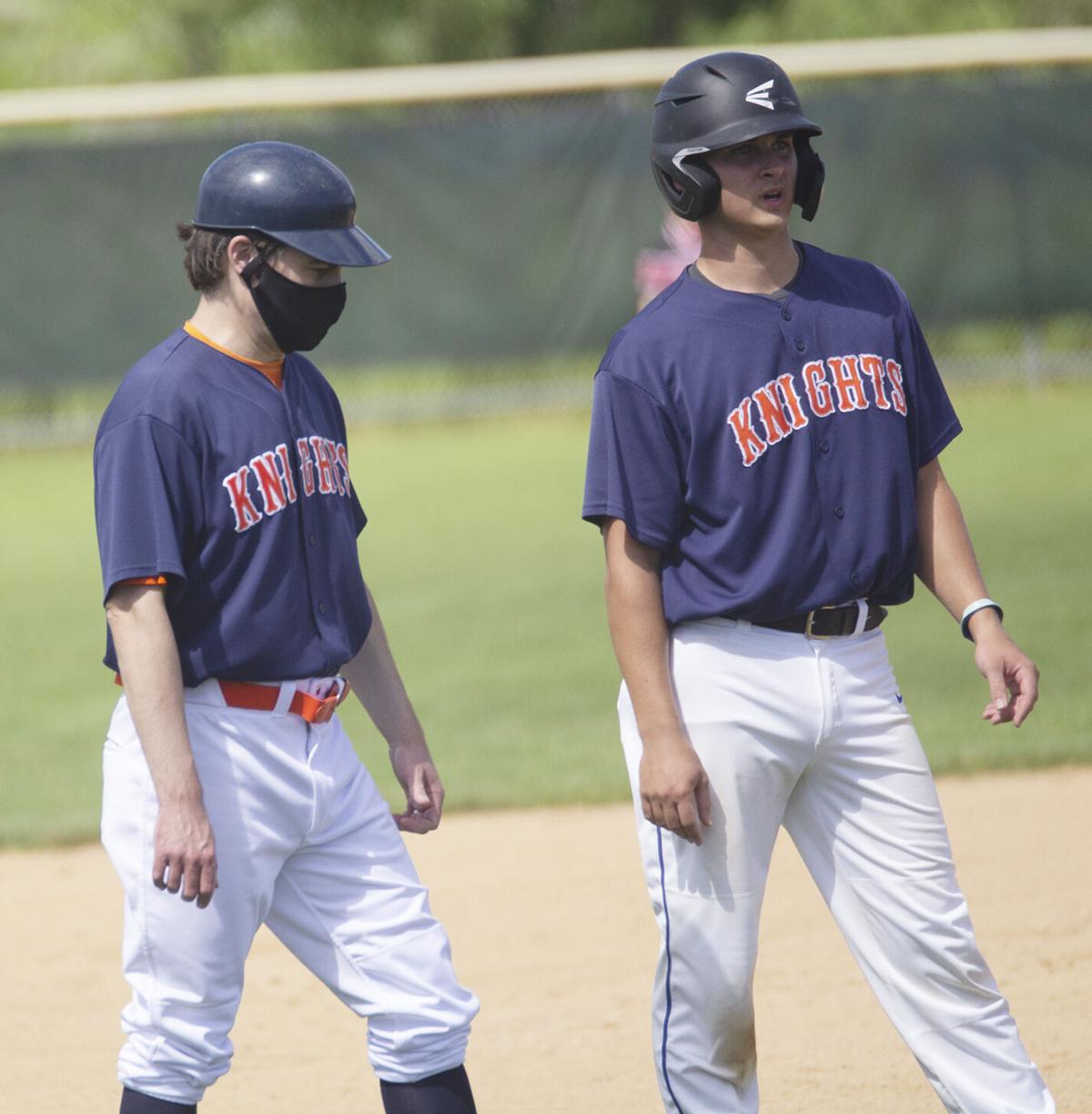 Manager Ryan Meehan, in mask coaching third base, checks with a Knights baserunner. 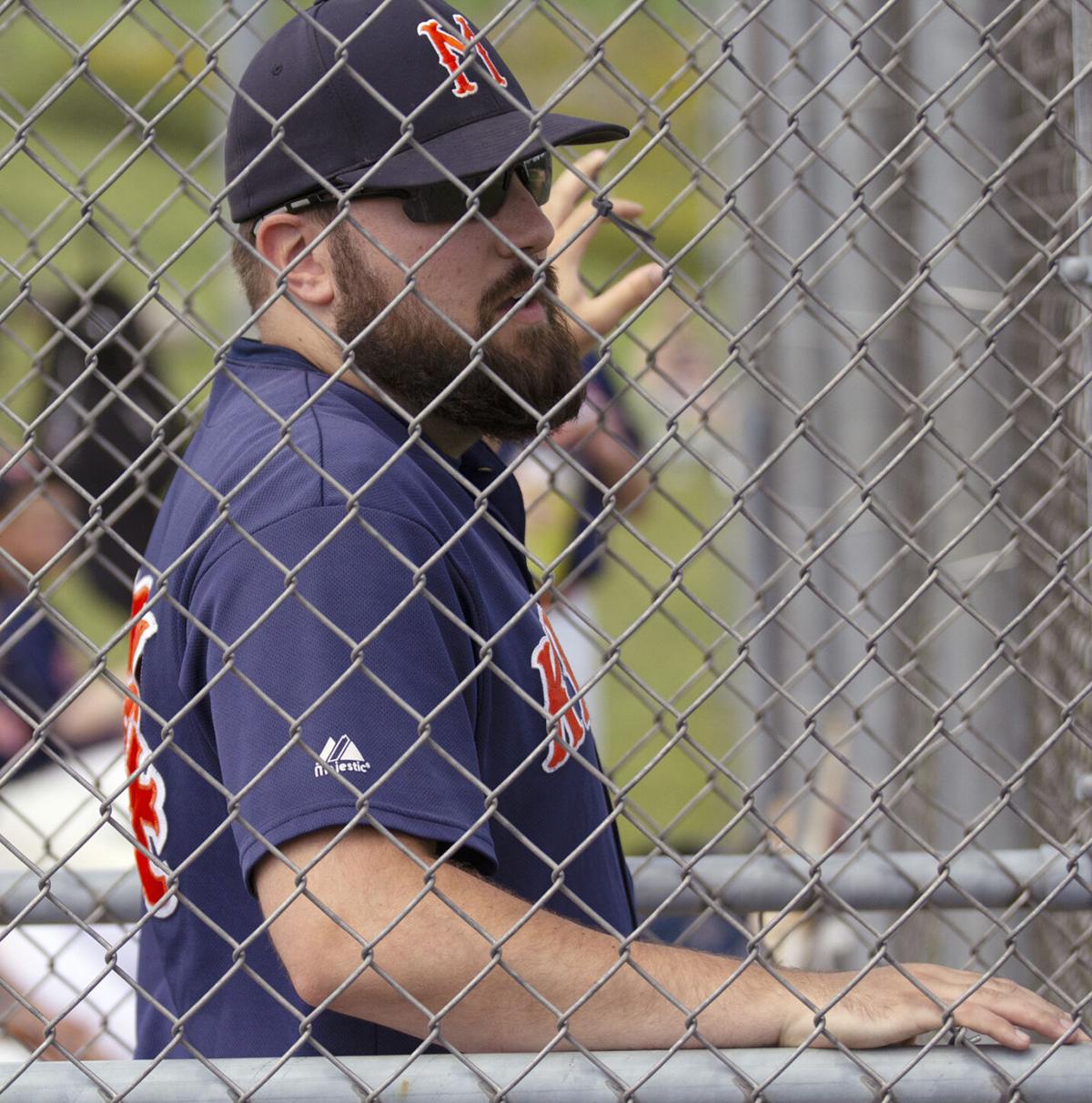 Shane Moore is the pitching coach for the Knights and a 10-year member of the team.

Mahtomedi graduate Austin Jerylo, shown here in a 13-3 win over Tri-City Sharks, is a pitcher and third baseman for the Metro Knights

Manager Ryan Meehan, in mask coaching third base, checks with a Knights baserunner.

Shane Moore is the pitching coach for the Knights and a 10-year member of the team.

Six members of Mahtomedi’s 2018 state champion baseball team are still teammates. They’ve been suiting up with the Metro Knights this summer.

The Zephyr group supplies one of the top pitchers, most of the infield, and outfielder for the Knights, who are heading into playoffs with a 10-9 record.

The Knights, managed by Ryan Meehan of Woodbury, also have a key member from White Bear Lake in Shane Moore, a veteran pitcher.

Meehan recruited Austin Jerylo, a pitcher and third baseman, in the winter of 2018-19, seeing him as a potential “impact college player” who could “elevate his performance in the biggest games.”

Jerylo had capped his senior season at Mahtomedi by pitching a 5-1 win over Rocori in the Class 3A state championship game at Target Field.

When Jerylo signed on, he mentioned that several Zephyr teammates were looking for a team. Meehan scouted first baseman Henry Laue and outfielder/second baseman Shane Brown at junior college games, got acquainted with them, and brought them on board.

Meehan didn’t get to see Carter Shook, who had a medical redshirt in the 2019 college season, but, needing a shortstop, signed him up and is glad he did. “He has completely transformed our infield defense in the two years he’s been with the Knights,” Meehan said, adding that Shook is a fine leader as well.

This year, the Knights added two more Zephyrs in pitcher Leo Bustos and outfielder Andrew Murphy. Bustos pitched a few innings but had arm soreness and shut down.

Jerylo, who’s 2-0 on the mound with a 2.37 ERA in 19 innings, and otherwise plays third, is elated to have so many hometown teammates.

“It’s always great to play baseball to begin with,” said Jerylo, “and it’s really nice to keep playing with some guys you grew up with, too.”

Last year, the Knights were a surprise state tournament entrant with Jerylo supplying a dramatic moment. They caught fire in the playoffs and upset top-seeded Stockman’s Irish in a best-two-of-three series. In game three, Josh Gaworski had a 3-0 lead after eight but ran into turbulence in the ninth. Jerylo relieved with bases loaded and two outs and got the saves, snapping off a curve ball for strike three on a 3-2 pitch.

The Knights, based this summer at Polar Lakes Park in White Bear Township, have existed since 2008. Normally their home field is Century College in Mahtomedi, but facilities there are closed for the summer.

Meehan, 40, an attorney, is the only player from the 2008 inaugural season still with them.

Moore has the second-longest tenure, joining in 2011, the year he graduated from White Bear Lake. About a half-dozen ex-Bears played then but he’s the only one remaining. The 6-1 left-hander has played in two Class A all-star games. His best season was 2017 with a 4-1 record and a 1.88 ERA.

“We get some really good kids on the team, and talent is there, too,” said Moore about why he’s stayed around for a decade. “They love baseball and it’s fun to see them make progress.”

When Meehan became full-time manager in 2016, he made Moore the pitching coach. “Not having a pitching background myself,” Meehan said, “I rely on Shane for advice regarding pitching strategy, and to work with our pitchers in-game to make adjustments, talk through what’s working and what isn’t, and so on.”

This season didn’t start until June 20, after restrictions due to the Covid-19 pandemic were loosened.

Next for the Knights are Class A state playoffs. There’s six pools, from which the top two will advance to state. The Knights face Macstrength Grizzlies at home Thursday, 7:30 p.m., then Lyon’s Pub on Sunday, noon, at Parade Stadium.