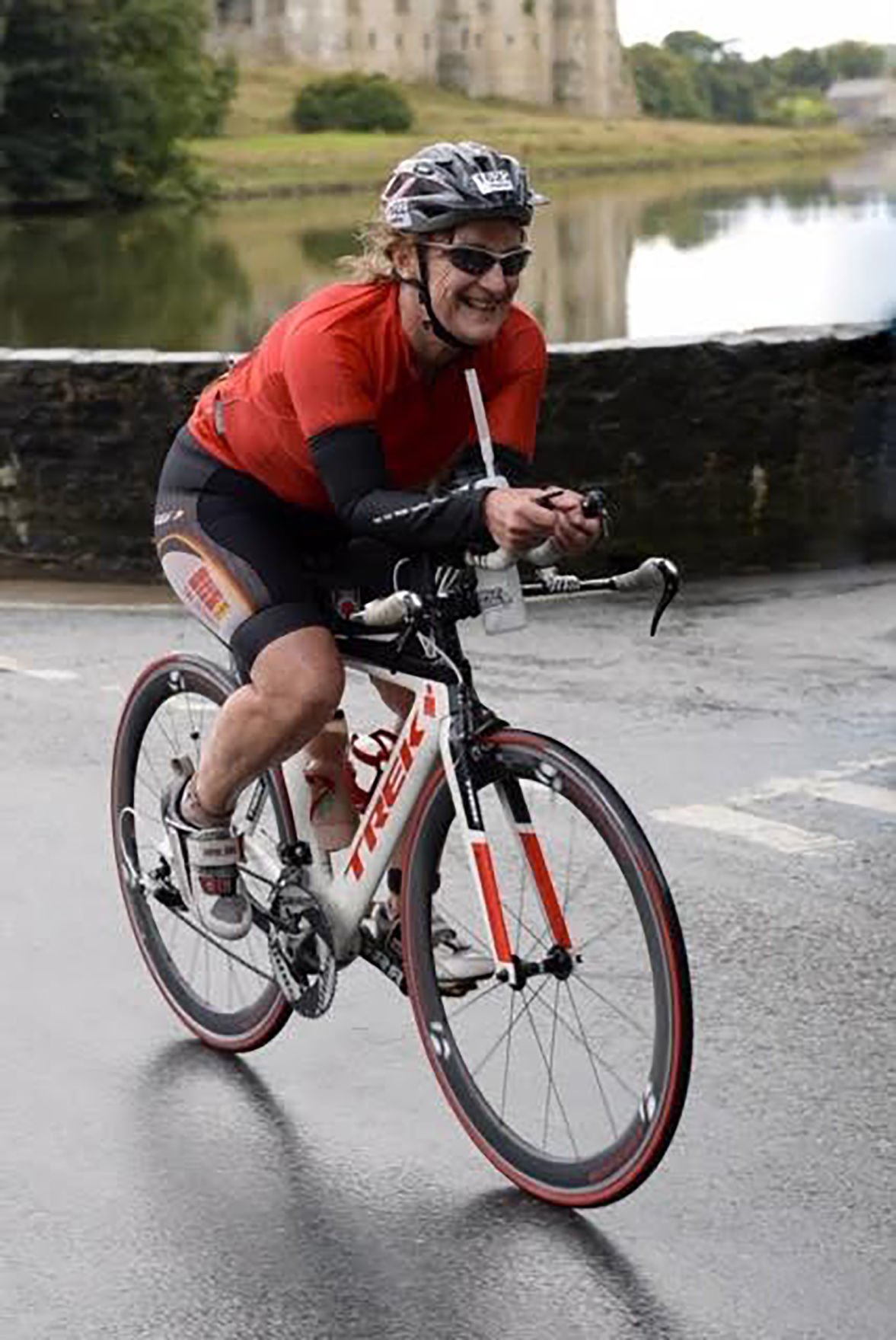 Dr. Rhiannon O'Connor during the bike portion of a triathlon 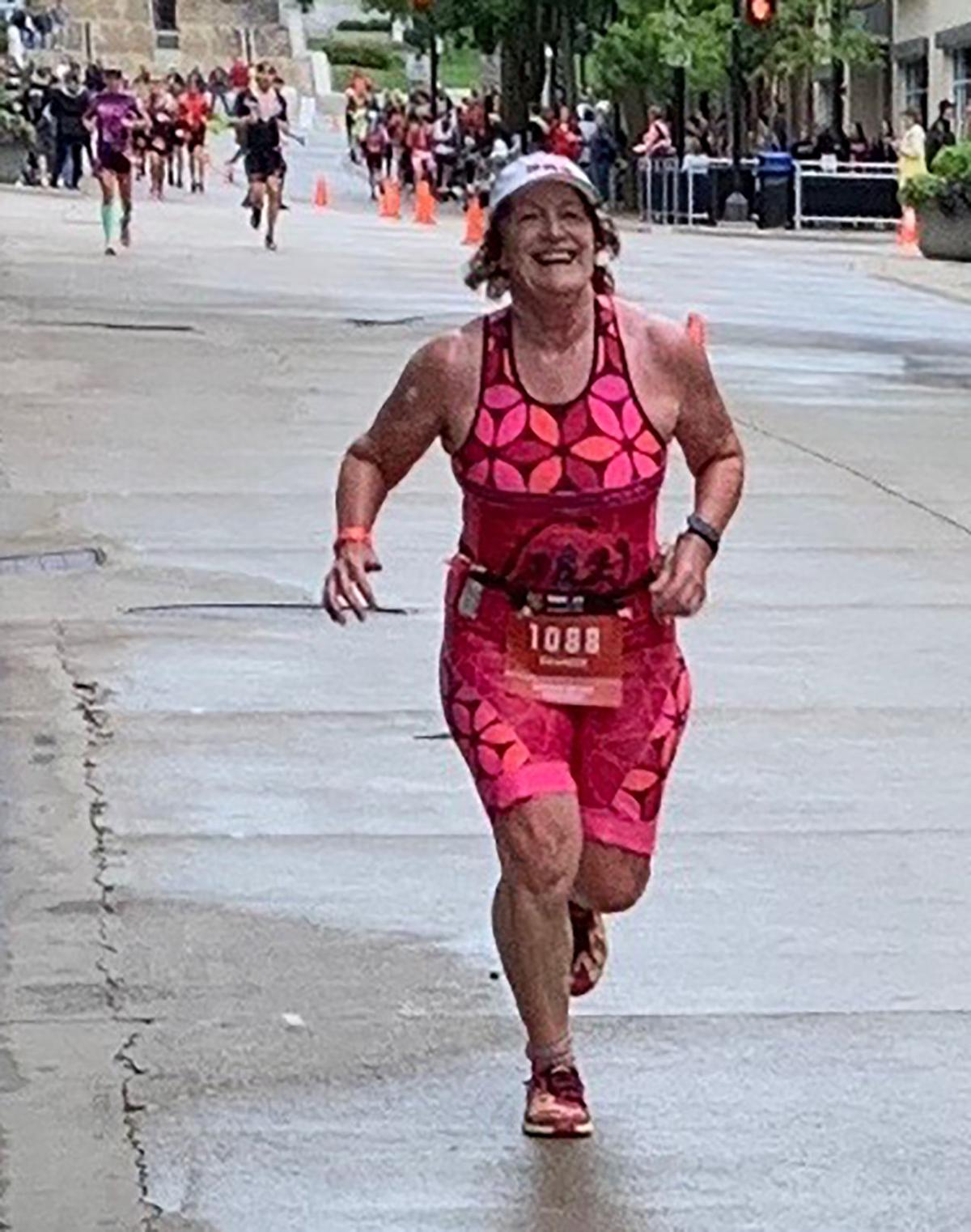 Dr. Rhiannon O'Connor during the run portion of a triathlon.

Dr. Rhiannon O'Connor during the bike portion of a triathlon

Dr. Rhiannon O'Connor during the run portion of a triathlon.

Just because you’re getting older doesn’t mean you have to BE old. There are ways of pumping the brakes on aging.

Dellwood resident Dr. S. Rhiannon O’Connor is doing a good job of that, although her approach might be a bit too extreme for most people.

The 62-year-old anesthesiologist not only runs triathlons, but has moved up to Ironman Triathlons — that’s a 2.4-mile swim, 112-mile bicycle race, and 26.2 mile run — and has earned a trip to next year’s world competition in Hawaii.

“I like to be physically active. I like a challenge. I truly believe the exercise is the fountain of youth,” O’Connor said.

O’Connor placed second among about 20 in her age/gender group at a qualifier, the Ironman Wisconsin Triathlon, on Sept. 8.

“I was in the lead until about mile six of the run when I was passed by another racer,” she said. “Amazingly, she did not attend the award ceremony, and so I was able to claim the entry for IM Kona. Sometimes you get a second chance!”

The reverse had happened when O’Connor won her division in her only other Ironman Triathlon, in Wales, England, in 2013. That time, she herself chose not to go to the world meet — hence, the second chance this time. She decided to do the second IM this year because several of her triathlon friends were going to.

The Ironman Triathlon World Championship is held in Kona, Hawaii, every October. “I’ve never been to one. I’ve never been Hawaii, either!” O’Connor said. This event is the pinnacle of sport, an invitation-only race for the top triathletes around the world.

O’Connor, who grew up just outside London, England, ran her first Ironman at age 56 in Tenby, Wales, where her family often vacationed. She placed first among five in her division there with a time of 14:38.

Asked what some so active at her age uses for fuel, she said:

“I try to follow a healthy diet — six to eight servings of fruit and vegetables a day, lots of lean protein and healthy fats. I try to avoid alcohol, but I do like a nice glass of win with dinner.”

On race day, breakfast is a cheese, ham and egg sandwich with orange juice and coffee. During the bike race, she gulps a protein sports drink, energy gels and water. On the run, there are aid stations every mile with a “smorgasbord” of Gatorade, water, Red Bull, chicken broth, orange slices, bananas, and energy gels.

Her father worked for the Minnesota company 3M in London. The family moved to Minnesota just as she was starting at St. Mary’s Hospital Medical School in London. Once she finished her internship, she rejoined her family. She lived in White Bear Lake for 30 years.

A lifelong athlete, she was in swimming, distance running, field hockey and lacrosse in her youth, and after moving to Minnesota, took up Nordic and downhill skiing and did a little figure skating too.

O’Connor is an anesthesiologist at United Hospital and the Nasseff Heart Hospital. She notes the her colleagues have been “very supportive” of her IM training, covering for her when she needs it.

Her husband Scott is her “biggest fan and supporter,” she said, cheering her on, toting her gear, driving the pontoon alongside her during long swims in White Bear Lake. Their two daughters have done shorter triathlons, she adds.

Before races, her training goes in four-week blocks, each week building on the previous one. At the peak of training, a typical Saturday is a 60-minute swim in White Bear Lake, a 90- to 100- mile bike ride, and a three-hour run. She added strength training recently which has improved her swim times.

The triathlete season, she said, is usually based around “A” races (“most important, want to do your best, whole season is geared towards this race”), “B” races (“not as important but still want to do well”) and “C” races (“usually early season, sometimes just for fun”).