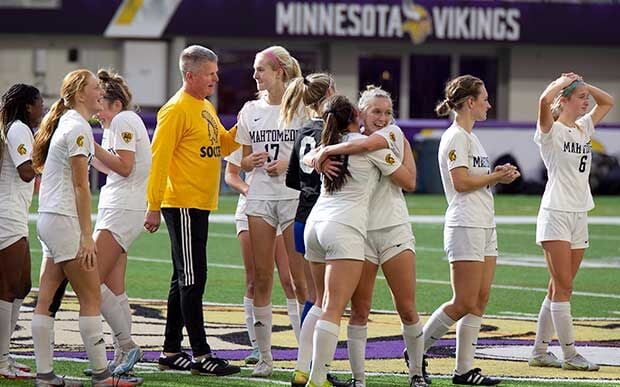 Coach David Wald and his players savor the championship as they await the awards ceremony. 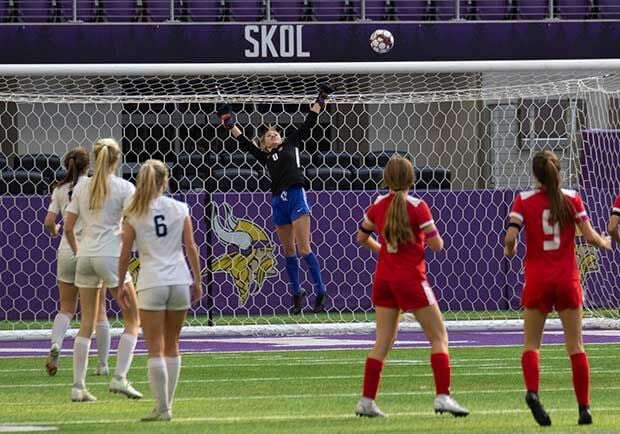 Paige Janssen soars to tip a shot away. 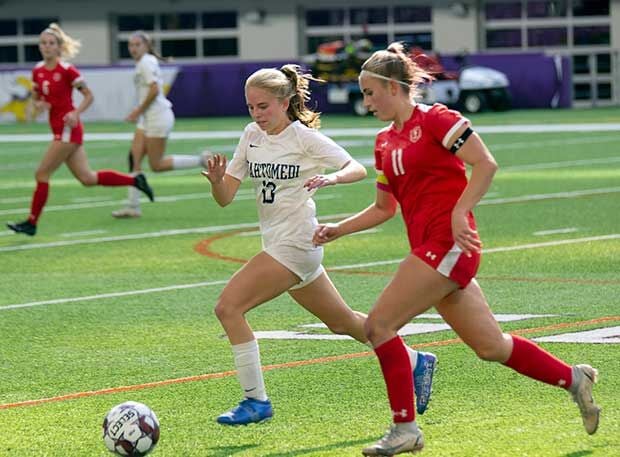 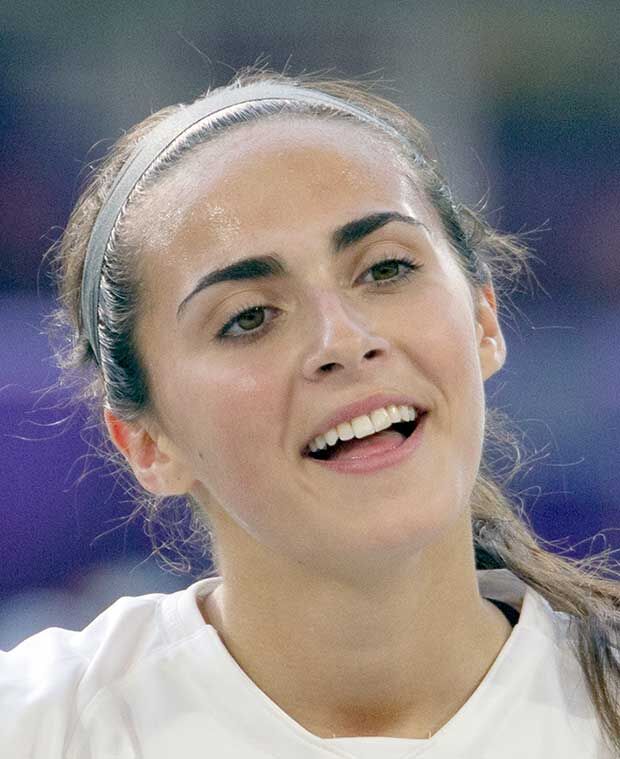 Audrey Barry, beaming after the game, scored all three goals for the Zephyrs.

Coach David Wald and his players savor the championship as they await the awards ceremony.

Paige Janssen soars to tip a shot away.

The Mahtomedi girls are not to be denied when they play in state championship games — not even when facing a team that pummeled them 7-0 earlier in the season.

“I have never wanted a game more than this one,” said Barry, senior forward, after her third state finals win. “We put the work in and got the results we wanted.” This time the Zephyrs were an underdog against a top-ranked team that beat them 7-0 on Sept. 18.

Mahtomedi finished 17-2-1, including 12-0-1, with just six goals allowed, since dusting themselves off after the BSM loss.

Barry got her three goals against a team that had allowed only five all season while scoring 92.

Mahtomedi is now 10-1 in state title games and has won the last four state tournaments played. There was no tourney last year, when they lost in the section finals.

Asked if the humbling loss was a motivator, coach Dave Wald affirmed, “Oh, yes, we used it the entire season. In the history of Mahtomedi soccer, we have never had a game like that.”

He added: “Redemption is a word we used a lot this year. These girls never took a day off. I’ve never had a team do that before.”

Benilde-St. Margaret’s was playing in its eighth state title game, of which they’ve won four, most recently 2016. The Red Knights finished 18-1-1.

“Obviously, we are extremely disappointed,” BSM coach Scott Helling-Christy said. “To be honest, last time, they (Mahtomedi) had their nightmare game and we had our game of the season. Today, it was the reverse. We created some chances; unfortunately they didn’t go in.”

Barry, always the fastest player on the field, simply outran the Red Knights defenders while launching pinpoint shots at full gallop. She scored in the fifth and eighth minutes and again late in the half, giving her 18 for the season (in 16 games) and five in the tournament.

“We knew she is their most dangerous player,” Helling-Christy said. “We had a plan for her and unfortunately it did work. We lost track of her three different times and she made us pay for it.”

About her ability to win footraces, Barry said, “I love it.” She added that Wald once admonished her: “Don’t try technical stuff, just run.”

Katelyn Beulke and Savanna Stockness provided assists. The other goal was a rebound after Campbelle Waldspurger set it up with a shot that was blocked.

Zephyr goalkeeper Paige Janssen made six saves. She stopped a fierce close-range shot in the 25th minute, then, a minute later, leapt to tip away a looping shot that would have gotten under the bar. In the second half she soared to deflect a shot with her left hand.

BSM got its goal from Sydney Drees in the 67th minute. They had some tough luck, too, with one shot rattling between the posts and another crashing into the crossbar.

Janssen stayed on high alert, with the 7-0 loss always on her mind: “I felt that they could come back at any moment and score three times in five minutes. I really had to dig deep and not think about the stress at all.”

BSM was missing a key player, Maddie Shannon, who had three goals in that win over Mahtomedi. She had 14 goals in 12 games before being injured. Their scoring leader Ava Wegener (21 goals) was held in check Saturday.

Wald praised his young defensive corps that was almost entirely rebuilt this year with only Stockness, a sophomore, having previous varsity experience. “They had growing pains but improved a ton,” he said about the group also including junior AJ LaFrinier, sophomores Claire Faulkner and Kaila Och and freshmen Emily Muetzel and Ally McCleery.

Named to the all-tournament team were Waldspurger, Barry, Janssen, and Beulke.

BSM reached the finals beating Alexandria 5-0 and No. 5 Cloquet-Carlton 3-0, their 15th and 16th shutouts. Mahtomedi advanced with wins over Mankato West 4-1 and No. 2 Holy Angels 2-1.

This is the first year of a three-class system with Mahtomedi in the middle class, 2A, rather than 1A, in which they made all their previous finals.