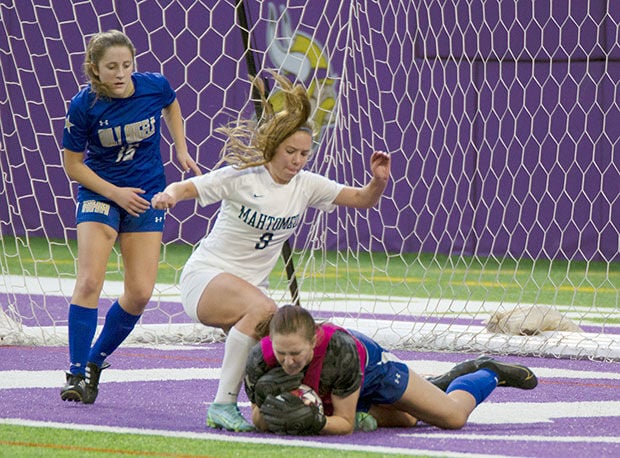 Emily Muetzel (16) heads the ball away from the net on corner kick defense. 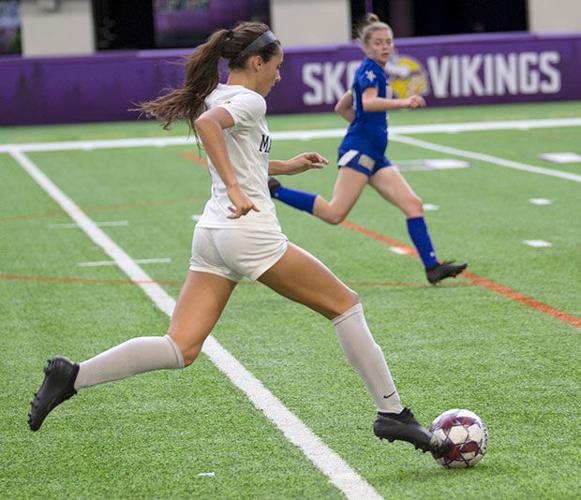 Audrey Barry, racing with the ball here, scored in the first half and was a key player in controlling the ball throughout the game. 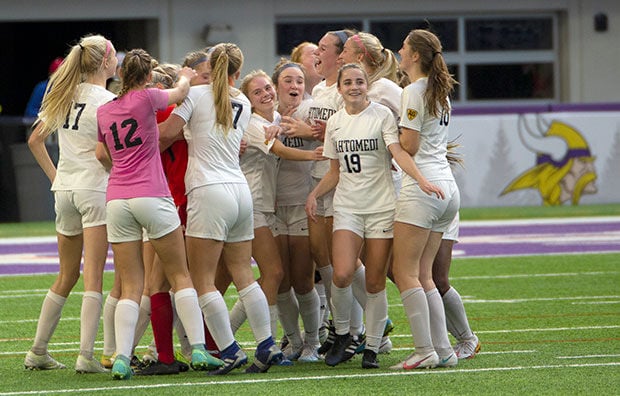 Campbell Waldspurger (19), who scored on a corner kick, and Mahtomedi teammates celebrated their 2-1 win over Holy Angels.

Emily Muetzel (16) heads the ball away from the net on corner kick defense.

Audrey Barry, racing with the ball here, scored in the first half and was a key player in controlling the ball throughout the game.

Campbell Waldspurger (19), who scored on a corner kick, and Mahtomedi teammates celebrated their 2-1 win over Holy Angels.

A corner kick that homed its way into the net turned out to be the difference as Mahtomedi nipped Holy Angels 2-1 in the Class AA girls soccer semifinals Thursday at US Bank Stadium.

The Zephyrs (16-2-1) will seek their 10th state championship with underdog status against top-ranked Benilde-St. Margaret's (18-0-1) on Saturday at 1 p.m. The Red Knights beat Cloquet-Carlton 3-0 in the other semifinal.

Campbelle Waldspurger curled a corner kick directly into the back corner of the net, just over the reach of leaping goalie Chloe Sandness, to break a 1-1 tie in the 25th minute.

“I had two previous corner kicks that were unsuccessful. So I thought to myself, why not try and put this one more toward the goal,” the senior midfielder said, adding there would be one teammate back there who likes to run toward the post and gets high in the air.

After it went in, Waldspurger was “overjoyed” to have hit her first CK goal, and in such a big game. Joyous teammates wrestled her to the ground.

“She’s a perfectionist. You should see her homework,” coach Dave Wald said.

The Zephyrs and goalie Paige Janssen (five saves) made the lead stand up.

Holy Angels had taken a 1-0 lead in the 16th minute on Audrey Garton’s 25th goal of the season, zipping the ball past a drawn-out Janssen, from about 15 yards, into an open net.

Audrey Barry knotted the score in the 20th minute. That was a highlight-reel goal also. With the Zephrys racing up the field, Lauren Coy played a long pass that led Barry perfectly. The speedy senior forward beat goalkeeper Chloe Sandness to the ball and touched it into the net.

That was two goals in five minutes against a team that had 15 shutouts while allowing just eight goals all year. But the Zephyrs, who had 14 shots on goal to Holy Angels’ six, were not able to add another.

Holy Angels coach David Marshak said the big challenge about facing Mahtomedi was their speed and size, especially against a smallish team like his.

“They are so physical. Their transition from offense to defense is so fast,” he said. And, offensively, he said, “There’s not a lot of space in there to work with.”

The corner kick goal was a bit deflating.

“The second goal was just ... unfortunate,” he said. “Not taking anything away from Mahtomedi — they outshot us 14-6 — but, to give up a goal on a corner kick like that?” He paused, wincing. “It’s either good luck or bad luck. For us it was bad luck.”

Wald, as usual, was not entirely impressed, even with a state semifinal win.

“I felt like at times we left the door open. We did not make it cut and dried that we were the better team. Holy Angels played very well. They are a great defensive team. I think we played a little nervous.”

Mahtomedi has won the last three state tournaments played — 2017, 2018, and 2019 — as there was no tournament last year. Five current Zephyrs are holdovers from 2019. Barry said everyone is well aware of the legacy: “We work really hard every day, always getting better. We knew a lot is expected of us.”

The Zephyrs handed Holy Angels (19-1-1) its first loss of the season and now face another unbeaten in BSM. In the final coaches rankings, BSM, Holy Angels and Mahtomedi were 1-2-3.

While the Zephyrs have an incredible 9-1 record in championship games, they are facing a team that crushed them 7-0 early in the season. They think they have a shot anyway.

“We have built up a lot since then,” Waldspurger said. “We did not play well against them. The goals they scored, we’ve learned how to defend against them.”