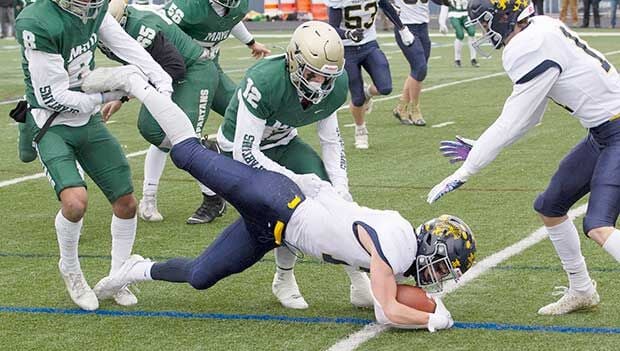 Jordan Hull dives over the goal line for an 18-yard touchdown with two Mayo defenders unable to hold him back. 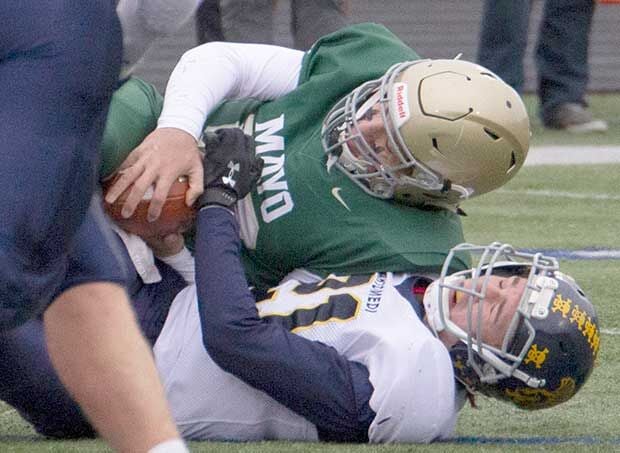 Cody Dvorak wrestled Mayo quarterback Bennett Ellsworth to the ground, one of five first-half sacks by the Zephyrs. 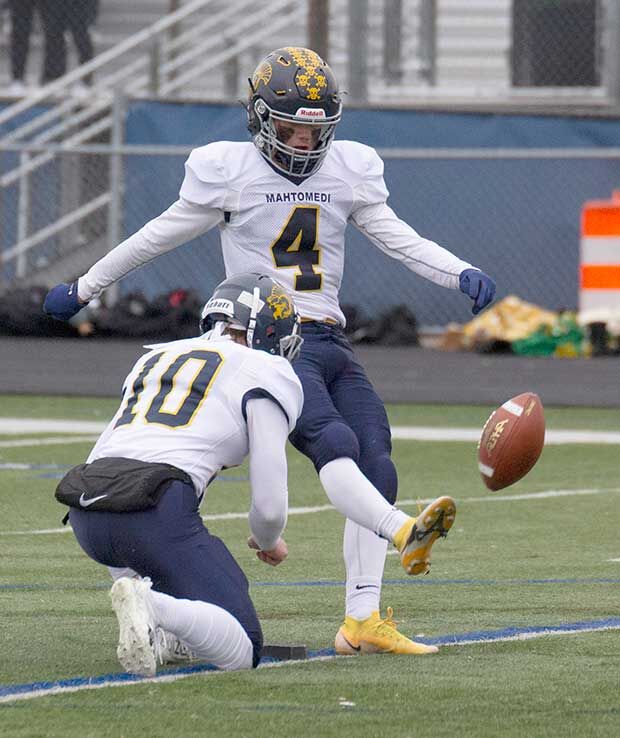 Jordan Hull dives over the goal line for an 18-yard touchdown with two Mayo defenders unable to hold him back.

Cody Dvorak wrestled Mayo quarterback Bennett Ellsworth to the ground, one of five first-half sacks by the Zephyrs.

Jordan Hull dashed 72 yards for a touchdown on Mahtomedi’s first series Saturday and the rout was on.

The Zephyrs didn’t stop until they had a 28-0 first-period lead in the state Class 5A quarterfinals, and went on to defeat No. 6 ranked Rochester Mayo 42-20 at Woodbury High School.

This will be Mahtomedi’s first semi-finals appearance since the 2007 team finished runner-up.

Rochester Mayo came into the game with a 9-1 record, averaging 42 points per game, but Mahtomedi overwhelmed the Spartans in the first quarter. It all started with Hull’s long sprint around left end, which put him over 1,000 yards and would be the first of his three touchdowns.

“I got a pitch, and was able to make the safety miss,” he recounted, “and it was pretty much clear sailing after that.”

The Zephyrs defense produced three-and-outs to force punts on Mayo’s first three possessions, leading to Hull’s touchdown, then a three-yard touchdown from Nicholas Beiersdorf, then a 42-yard scoring pass from Charles Brandt to Ethan Loss.

On Mayo’s fourth series, Will Arlandson picked off a pass and returned it 12 yards, setting up Hull’s 18-yard touchdown on the next play. Hull lunged to stretch the ball over the goal line when defenders grabbed his legs from behind.

“Honestly, everything went our way,” Hull said about the first quarter. “We talked about trying to not be too high after good plays or too low after bad plays. We focused on staying steady throughout the whole game.”

He paid tribute to Mayo’s firepower.

“We definitely needed all the points we could get, against a team like that, because they can really score when they get going. In the second half, they showed that they did not want their season to be over. But we stayed composed.”

In response, Hull broke away again, this time 52 yards down the right sideline. The Zephyrs led 35-7 at halftime. They sacked Ellsworth five times in the first half, twice each by Cody Dvorak and Dominic Rohrer, and one by John-Paul Johnson.

Mahtomedi added a 17-yard touchdown pass from Brandt to Ramsey Morrell in the fourth period. Joey Heinsch was 6-for-6 on conversions.

Mayo had closed the gap to 35-20 in the third period on Ellsworth’s 23-yard TD pass to Carter Holcomb and a four-yard run by LaBron Lee-Stadstad.

Hull gained 170 yards in 14 carries, lifting season totals to 1,100 yards and 16 touchdowns. Beiersdorf gained 47 in nine carries and Brandt 27 in six carries. Brandt completed seven of 11 passes for 160 yards. Morrell caught four for 83 yards. Loss had gains of 42 and 30 on his two catches.

Dvorak made nine tackles (five solo). Arlandson made five tackles and the interception. Hull, Loss, Johnson, and William Harris were each in on four tackles. Jonathan Harvey recovered a fumble.

Mahtomedi’s two losses came in succession in mid-season, a 35-7 humbling by Spring Lake Park at home, then a last-second 18-13 loss at St. Thomas Academy. They’ve outlasted both teams. SLP finished 6-3 with a first-round playoff loss. STA was unbeaten until Mankato West edged them 21-14 Saturday.