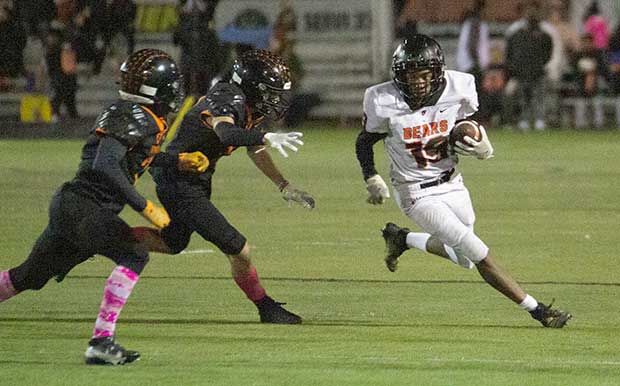 Reyshaun Brakes, sweeping for a first down here, had an 80-yard kick return and 12-yard run for touchdowns against Osseo. 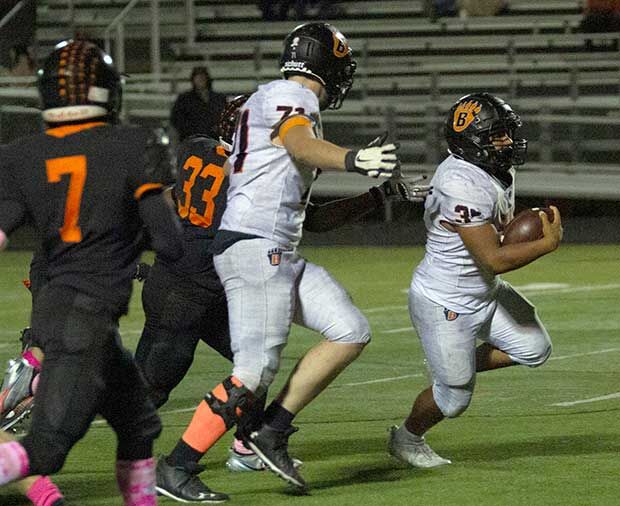 Anthony Lewis-Royal breaks through the line for one of his three touchdowns, with blocks from Theron Cartier (71) and others. 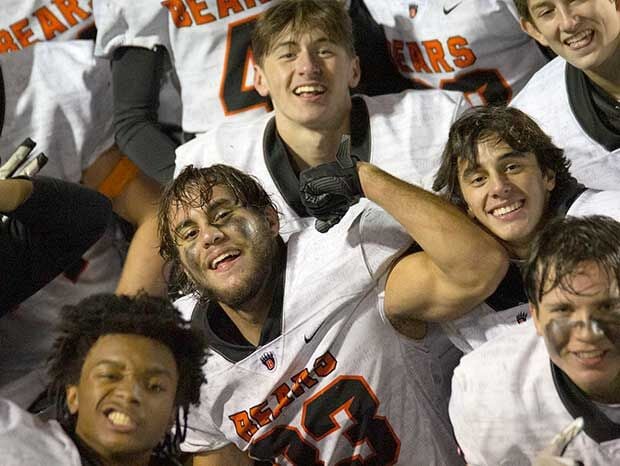 Matt Sloan (33), who made four sacks, and teammates beamed in the end zone as they gathered for the coach’s remarks. 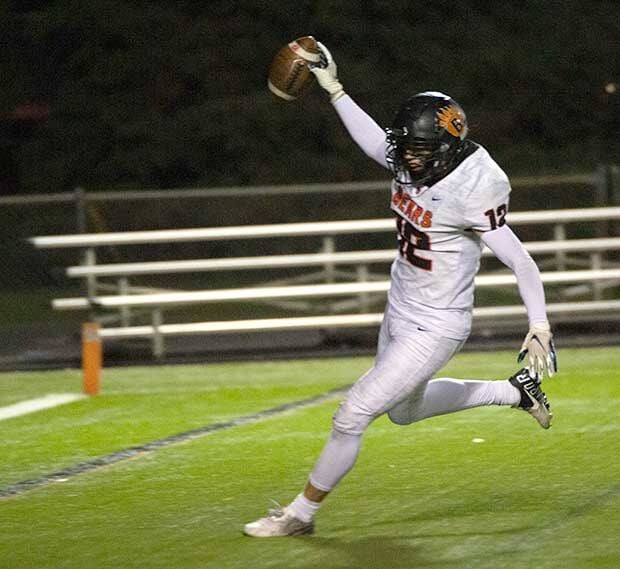 Mike Delaney exuberantly crosses the goal line with a clinching touchdown after swiping the ball from an Osseo ball-carrier.

Reyshaun Brakes, sweeping for a first down here, had an 80-yard kick return and 12-yard run for touchdowns against Osseo.

Anthony Lewis-Royal breaks through the line for one of his three touchdowns, with blocks from Theron Cartier (71) and others.

Matt Sloan (33), who made four sacks, and teammates beamed in the end zone as they gathered for the coach’s remarks.

Mike Delaney exuberantly crosses the goal line with a clinching touchdown after swiping the ball from an Osseo ball-carrier.

White Bear Lake was buoyed by a kickoff return for a touchdown, and a defensive touchdown after a safety stole the ball, against Osseo on Friday night.

Those two rare occurrences were the difference as the Bears fended off an Oriole rally 41-27 in Osseo.

Rayshaun Brakes fielded the opening kickoff of the second half near the left sideline, swiveled past tacklers in the middle of the field, and accelerated the rest of the 80 yards into the right corner of the end zone, giving the Bears a 27-6 lead.

“He made a great run,” said coach Ryan Bartlett about the team’s first kick return TD since Brice Peters in 2018 against East Ridge.

Osseo (4-3) charged back with three touchdowns by TJ Clay to pull within 34-27, then stopped the Bears on downs at their own 14 with 4:16 left in the game. The Orioles had plenty of time to keep their momentum going and tie the score or take the lead.

However, Mike Delaney ended all the suspense two plays later. The senior safety yanked the ball from Owen Dakowitz’s arms at the 19 and dashed to the end one untouched, holding the ball aloft as he crossed the goal line, restoring a 14-point lead.

“Coaches were telling me all game I had to strip the ball,” Delaney said, beaming, after the game. “(Linebacker) Chris Heim was tackling him low, and I went for the ball … My last touchdown? That was in ninth grade when I was playing quarterback.”

Said Bartlett: “That’s what we tell them, first guy makes the hit and the second guy there tries to strip the ball. That time they did it.”

With the victory, the Bears clinched their first winning season since 2012. They will close the regular season at Totino-Grace (1-6) on Thursday evening.

The Bears got three touchdowns from Anthony Lewis-Royal, two from Brakes and four quarterback sacks from Matt Sloan as they improved to 5-2.

Lewis-Royal carried 25 times for 113 yards and scored from the one, four and 12 yard lines, lifting his season totals to 822 yards and 18 touchdowns. Brakes also had a 12-yard touchdown run, giving him seven for the year, and gained a personal-best 95 yards in 12 carries. Quarterback Connor Gerrell, a 61-percent passer for the season, completed eight of nine for 83 yards, with four receivers catching two each.

Sloan, senior linebacker, forced a fumble with his first sack that was recovered by Aiden Aikens and led to a 55-yard scoring drive. The all-state wrestler smothered the passer on a two-point conversion attempt by Osseo. His last two sacks came back-to-back on Osseo’s final series after Reynolds’ touchdown.

One sack Sloan didn’t get was a play where Osseo quarterback Caden Fitzgerald slipped out of his grasp, veered to the sideline and blazed 65 yards for the Orioles first touchdown, late in the second quarter. Fitzgerald had a pair of 20-yard runs nullified by holding penalties before that. “He is probably the fastest guy we’ve faced this year,” said Bartlett about Fitzgerald, a senior who transferred from Champion Park this year.

Clay broke off touchdowns of 19, six and 36 yards in three consecutive carries. The last of those came after the Orioles shook loose a fumble from Brakes at the Bear 41 on a kick return. Clay carried 15 times for 93 times. Fitzgerald netted 104 yards in 10 carries. He completed three of nine passes for 80 yards, including a 59-yard gain to Bryce Hawthorne that set up a touchdown. Devin Williams gained 50 yards in 13 totes.

About the seesaw game, Bartlett reflected, “We have to learn to close better, but I was really happy with the way both sides (offense, defense) picked each other up.”