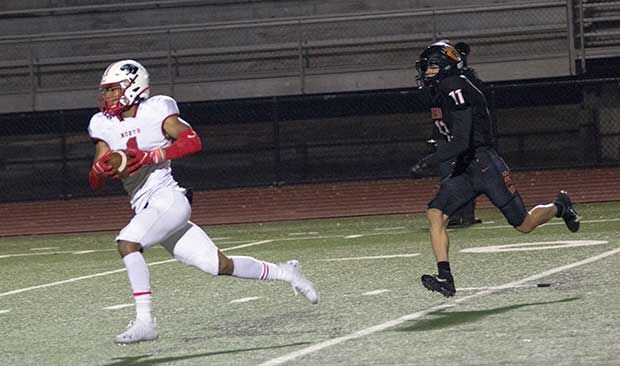 Najee Nelson of Lakeville North nears the goal line on a 51-yard touchdown pass, with Tyler Schoeberl in pursuit. 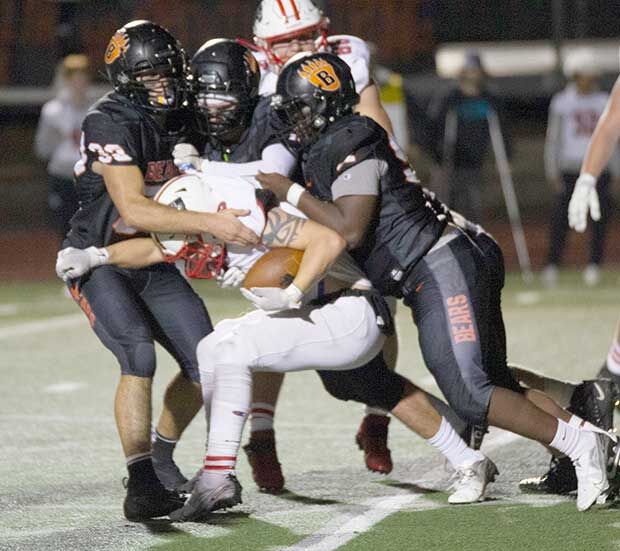 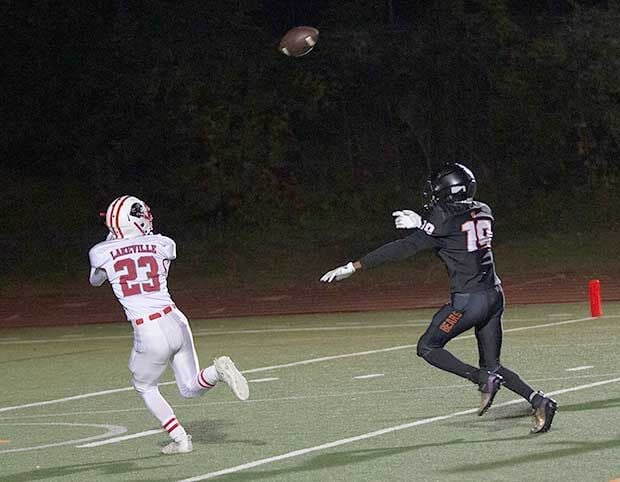 Wyatt Wilkie (23) of Lakeville North was about to intercept a pass, intended for Rayshaun Brakes, at the goal line.

Najee Nelson of Lakeville North nears the goal line on a 51-yard touchdown pass, with Tyler Schoeberl in pursuit.

Wyatt Wilkie (23) of Lakeville North was about to intercept a pass, intended for Rayshaun Brakes, at the goal line.

White Bear Lake’s best football season since 2012 ended with their most lopsided loss since 2014 on Friday night. The Lakeville North Panthers came to town and humbled the Bears 39-0 in the first round of the state Class 6A playoffs.

Technically it was an upset since Lakeville North was 3-5 in the regular season and seeded fifth in their quadrant while the Bears were 6-2 and seeded fourth. But that’s only because the Minnesota State High School League took the unprecedented step this year of dividing the 32 teams in Class 6A into a Gold division, in which the 16 best programs bashed heads with each other, and the other 16 in the Maroon. Lakeville North played a Gold schedule and the Bears were Maroon.

After scoring between 21 and 41 points every game in the regular season, the Bears were blanked for the first time in 25 games.

The only two highlights for the Bears were Anthony Lewis-Royal gaining enough yards to crack the 1,000-yard marker, and one staunch goal-line-stand by the otherwise beleaguered defense.

Lewis-Royal, gaining 93 yards in 18 carries, finished with 1,008 yards and 20 touchdowns. This was the first game he didn’t get into the end zone, though.

Lakeville North started the game with a good kick return plus a face mask penalty tacked on, giving them a short field at the Bears 39, and they quickly moved in to score on Gavyn Schraufnagel’s two-yard run. The Panthers forced a Bears’ three-and-out and trekked 70 yards, capped by Alex Kasak’s four-yard run for a 14-0 lead.

On their next possession, the Panthers marched again, to a first-and-goal at the five, but the Bears came up with a goal-line stand, stopping three rushes from inside the two-yard line. Then, starting just two feet from the goal line, the Bears, still down by just 14-0, generated their lone sustained drive of the game, reaching the Panther 42. However, when quarterback Connor Gerrell went for broke, trying to hit Rayshaun Brakes for six, he overthrew and Lakeville’s Wyatt Wilkie intercepted, falling into the end zone for a safety.

The Panthers got a 26-yard field goal by Finnigan Jacques with 33 seconds left in the half for a 17-0 lead, and continued to dominate in the second half. Riley Grossman hit Nagee Nelson deep for a 51-yard touchdown, Tommy Niggeling dashed 19 yards for a touchdown, and Ryan Brodin picked off a pass and returned it 42 yards for a touchdown.

Gerrell, coming off an excellent regular season, was intercepted three times while completing 13 of 21 for 111 yards. Alex Lockwood caught six for 54 yards and Vatel Henderson five for 52. The Bears were held to a season-low 197 yards, netting 86 in 26 ground plays. They lost two fumbles also and had a 0-5 turnover deficit.

The 39-point deficit was the largest for the Bears since a 49-0 loss to Mounds View in 2014. The Bears’ 6-3 record was their first winning season since the 2012 team (also 6-3) but they remain without a playoff win since the 2014 team beat Cretin-Derham Hall.