Skip to main content
You have permission to edit this article.
Edit
1 of 6 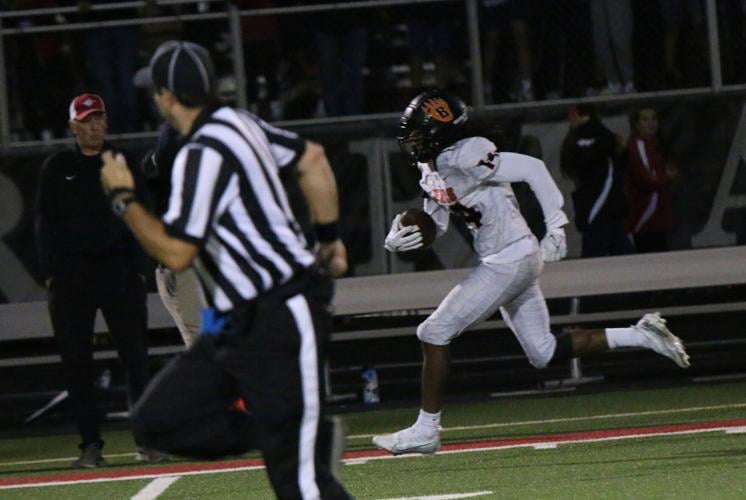 Vatel Henderson raced 95 yards for a touchdown after catching a pass from Gavin Knutson at midfield and shedding the defender. 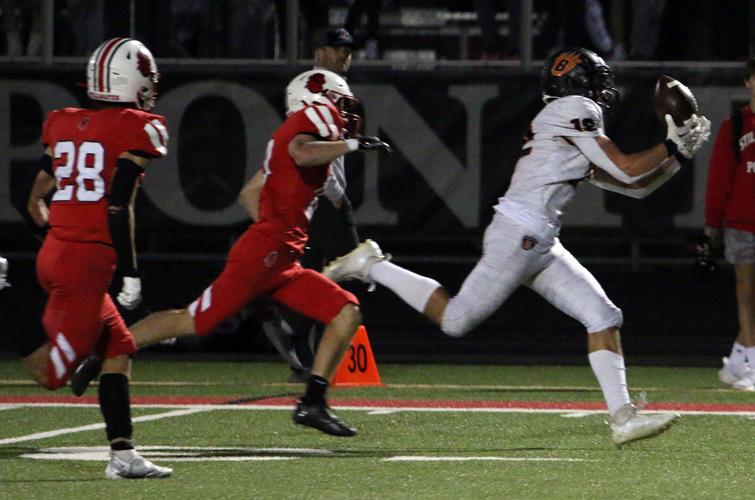 Michael Delaney latches unto a pass from Gavin Knutson for a 46-yard gain. 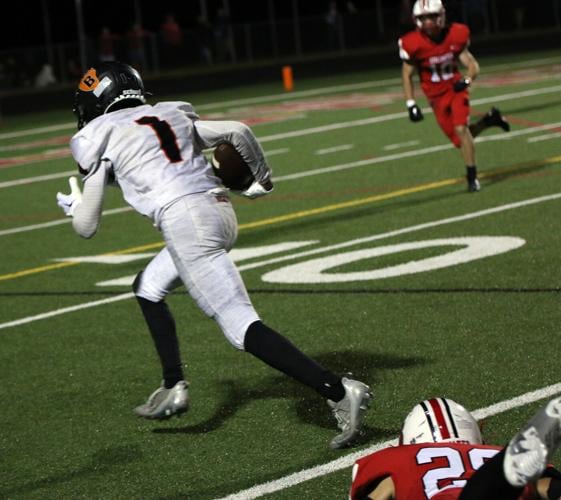 Rayshaun Brakes dashes toward the end zone for a 40-yard TD pass from Gavin Knutson after breaking a tackle. 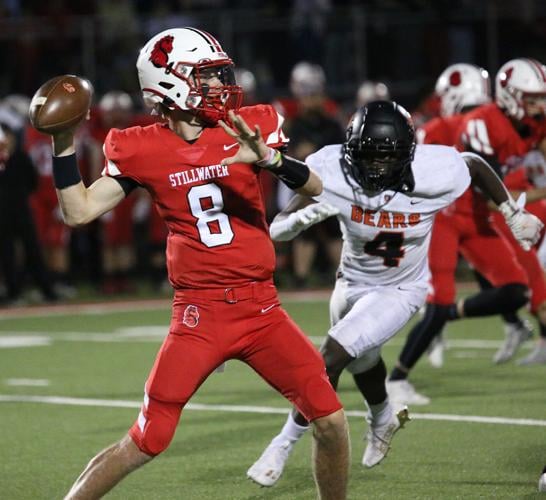 Austin Gibson (40) and Michael Delaney (12) of the Bears converge on Stillwater's Joe Hoheisel after a short gain. 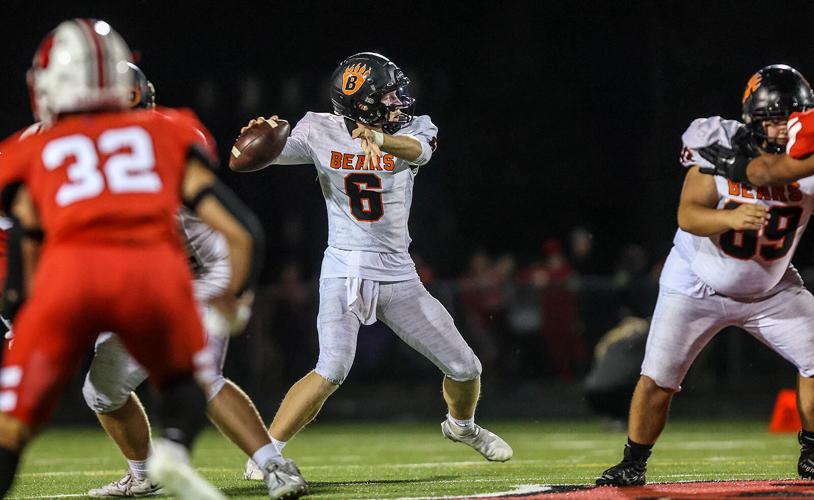 Vatel Henderson raced 95 yards for a touchdown after catching a pass from Gavin Knutson at midfield and shedding the defender.

Michael Delaney latches unto a pass from Gavin Knutson for a 46-yard gain.

Rayshaun Brakes dashes toward the end zone for a 40-yard TD pass from Gavin Knutson after breaking a tackle.

Austin Gibson (40) and Michael Delaney (12) of the Bears converge on Stillwater's Joe Hoheisel after a short gain.

A football contest filled with spectacular passing displays by both sides was ultimately settled by two short-yardage plays, with Stillwater getting best of White Bear Lake in both cases to defeat the Bears 35-28 before several thousand fans at the Ponies homecoming game Friday night.

Stillwater’s Max Shikenjanski fired four touchdown passes, hit 19 of 31 for 251 yards, and ran for the fifth TD to keep the Ponies (5-0) unbeaten. His eight-yard toss to Tanner Schmidt off a dazzling scramble with 6:15 left gave the Ponies their final 35-28 lead.

White Bear Lake’s Gavin Knutson rang up 389 passing yards, completing 19 of 33, highlighted by Vatel Henderson catching a 95-yarder to knot the score at 28-28 at the end of the third quarter. Rayshaun Brakes had a 40-yard TD catch and Chris Heim ran for two scores set up by passes.

After the Ponies took their final lead, the Bears quickly responded with Knutson’s over-the-top toss to Michael Delaney for a 46-yard gain to the Ponies 14.

However, it came down to fourth-and-three at the seven, and when Knutson hit Brakes near the sideline, the Ponies surrounded the slippery wide receiver and stopped him a yard short of the marker.

Seven plays later, with 1:33 left and the Bears out of time-outs, Stillwater had a fourth-and-one at their own 22 and went for it. With the game on the line, Shikenjanski pushed forward on a quarterback sneak for the first down. Two kneel-downs later, the No. 4 Ponies wrapped it up.

Henderson caught eight passes for 194 yards including a 55-yarder prior to the 95-yard score. Brakes snagged five for 98 yards. Schmidt caught two scoring passes for Stillwater and Thomas Jacobs and Joseph Hoheisel one each. Neither team did much on the ground and each gave up one interception.

The Bears lost a fumble on their second play from scrimmage at midfield and Shikenjanski needed just two plays to reach the end zone, hitting Schmidt for 32 and then the last 13 yards.

Moments later, Jacobs caught a short pass in the flank, turned the corner and raced 46 yards to make it 14-0. That would be the first of three times the Bears trailed by 14 but stormed back.

In the second quarter, the Bears had their only sustained drive in the game, capped by Heim’s one-yard touchdown.

After interceptions by Brakes for the Bears and Jack Mcglynn for the Ponies on back-to-back plays, Stillwater worked a flea-flicker play to perfection. With two laterals in the backfield completely fooling the Bears, Shikenjanski got the ball back deep behind the line and fired to a wide-open Hoheisel at the 10 for a 39-yard touchdown.

Brakes caught a pass at the sideline from Knutson 20 yards down field, with his back to end zone and Stillwater’s Landon Wayer draped over him, but spun away from the defender and sprinted to the end zone, dodging another tackler at the five, for a 40-yard score, making it 21-14.

The Ponies forced a Bears punt from the end zone. Imeleyo Stanton had to leap for a high snap and hurried the punt, shanking it out of bounds at the 14. Next play, Shikenjanski, seemingly trapped for a loss by two Bears, reversed field and darted around end for the touchdown, making it 28-14.

Henderson pulled the Bears even with two highlight reel plays.

The 6-foot-2, 180-pound senior hauled in a Knutson pass, broke a tackle and sped 55 yards, caught at the six. Two plays later, Heim barged four yards for his sixth TD of the season.

The Bears forced a punt but were backed up to the five-yard line. Knutson went for broke, heaving the ball to Henderson on the sideline near midfield. Henderson was tightly covered by Braden Wenner but out-jumped him for the ball, then broke his tackle and dashed the rest of the 95 yards untouched, knotting the score at 28.

Stillwater’s go-ahead touchdown capped a 60-yard march helped along by three Bear penalties and a 20-yard gain with a screen pass.

Shikenjanski’s game-winning TD pass was the senior slinger’s 17th of the season. Recruited by the Gophers, he has thrown for 1,478 yards, but was almost outshone on this night by Knutson, a senior first-year starter who has rolled up 984 yards and eight TD tosses on the season.

What is your favorite holiday season tradition?