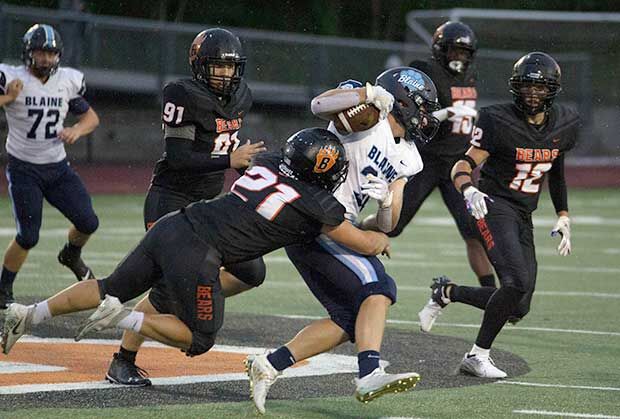 Chris Heim (21) of the Bears stops Blaine’s Preston Meyers at the line of scrimmage, with Wally Venter (12) and Zachary Pratt (91) also in pursuit. 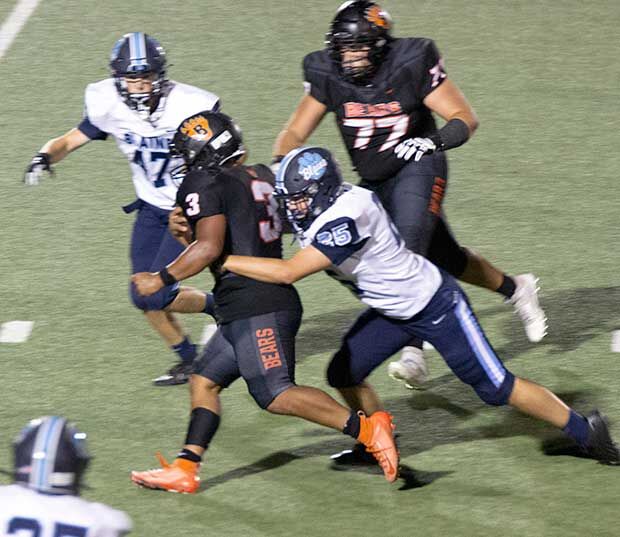 Anthony Lewis-Royal, who scored three touchdowns for the Bears, picks up a first down on a pass play here, with Henry Morris and Jaylen Hierlingfer (17) of Blaine making the tackle. 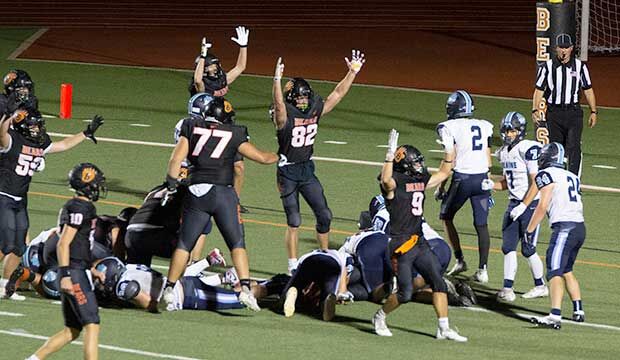 Chris Heim (21) of the Bears stops Blaine’s Preston Meyers at the line of scrimmage, with Wally Venter (12) and Zachary Pratt (91) also in pursuit.

Anthony Lewis-Royal, who scored three touchdowns for the Bears, picks up a first down on a pass play here, with Henry Morris and Jaylen Hierlingfer (17) of Blaine making the tackle.

On the verge of being blown out at home, White Bear Lake instead turned their season opener into a thriller that went down to the final play.

Down 20-0 in the third quarter, the Bears generated touchdown drives on their least three possessions against Blaine to take the lead — only to lose on a last-second field goal 23-21.

“Tough way to lose, but I like the way we battled back,” coach Ryan Bartlett said. “This group is tough and goes hard, and I think there are good days ahead.”

Anthony Lewis-Royal scored all three touchdowns for the Bears, capped by a one-yard plunge with 1:10 left for the lead, at the end of a 92-yard drive, one play after Connor Gerrell’s pass to Nick Svir gained 28 yards. Michael McCormack’s third conversion put the Bears ahead 21-20.

It appeared that Bears would protect that hard-earned lead when they mounted a fierce pass rush on Blaine quarterback A.J. Kaul in the final minute, first forcing a throw-way pass, then getting a sack by linebacker Tollowalope Oyekunie. They were close to another sack on third down but Kaul sidestepped the lineman and fired a 47-yard bomb to halfback Preston Meyers down the right sideline.

Next play, he hit Jordan Reynolds for 12 yards, again at the sideline, to the Bears 18. After the Bears broke up two pass plays, Kaul gained five yards on a quarterback draw to the 14, then wound the clock down to 2.8 seconds and called time out.

Kendall Stadden’s field goal attempt was at an angle from the right hashmark, but he drilled the 31-yarder and handed the Bears a heartbreaking loss.

The Bears squandered a superb opening drive, which turned out to be critical with the one-point loss. They reached the Bengal four, mostly on straight-ahead charges by Lewis-Royal, before losing 20 yards on a wildcat play when the snap got past halfback Matt Sloan.

After that, the Bears offense went silent while the Bengals scored twice in the second quarter — on Meyers’ five-yard run and Kaul’s 36-yard strike to Reynolds — and again in the third when Kaul capped a drive with a four-yard run. Stadden hit the post on one of the conversion kicks.

The Bears came alive with a 63-yard drive capped by Lewis-Royal’s five-yard drive with 3:40 left in the third period.

That touchdown at least got them on the scoreboard, but the fired-up Bears were far from done.

“We just got more physical up front and got back to what was working,” Bartlett said. “We got some confidence and just got rolling.”

Their defense came up with a big turnover when defensive end Damarion Pollard busted through to swat a pass by Kaul and, before the ball looped to the ground, linebacker Chris Heim dived to snag it for an interception. Big gainers by Sloan of 21 and 15 yards set up Lewis-Royal’s one-yard touchdown with 9:16 left, pulling the Bears within 20-14.

The defense came through again, forcing a punt from midfield, and the Bears got the ball back at their own eight with 5:01 left.

Ninety-two yards away, they reached midfield on bursts by Lewis-Royal and Sloan. On a fourth-and-seven play, Gerrell, given several seconds by his line, fired a 25-yard strike to Rayshawn Brakes.

Gerrell, who had completed only one short pass before that, came up with another big throw, rolling right to hit Svir for a 28-yard gain. It appeared that Svir had scored but the officials placed the ball on the one. No matter, as Lewis-Royal punched it over on the next play.

Lewis-Royal carried 29 times for 127 yards and Sloan picked up 47 yards in 10 carries. Gerrell completed five of 12 for 86 yards. For the Bengals, Kaul completed 14 of 27 passes for 243 yards, to seven different receivers. Meyers gained 91 yards in 18 carries. Jackson Braun made an interception.

The Bears will play at Roseville next Thursday evening.