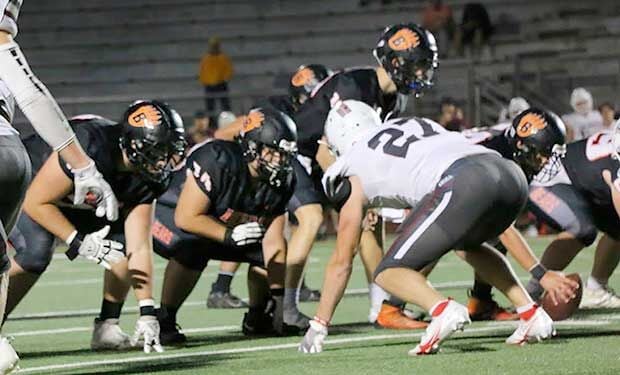 The Bears offensive line hunkers down in front of Connor Gerrell on a play near the goal line.

Anthony Lewis-Royal charges toward the goal line for a touchdown on a screen pass, getting a block from Alex Lockwood (1).

The Bears offensive line hunkers down in front of Connor Gerrell on a play near the goal line.

Anthony Lewis-Royal charges toward the goal line for a touchdown on a screen pass, getting a block from Alex Lockwood (1).

Right from the start, the White Bear Lake offensive line showed who was boss in the Bears’ homecoming game Friday night.

A strong opening kickoff by Anoka pinned the Bears on their own 11, but the O-Line opened a big hole on the first play and Matt Sloan barged 49 yards, between right guard and tackle. Five plays later, they launched Anthony Lewis-Royal on a 23-yard touchdown, the first of his four in the game.

“Our line has been insane. They’ve done that all year,” said quarterback Conor Gerrell, who completed 11 of 15 passes for 150 yards and two touchdowns, caught by Lewis-Royal and Nick Svir.

Lewis-Royal carried 28 times for 153 yards and three touchdowns. Sloan had 63 on six carries, Matthew Currier 44 in 10 carries and Rayshaun Brakes 37 in eight totes.

Their position coach is Nick Devet.

“Our offensive line has been very consistent, never too up or too down. They are so calm and so steady,” coach Ryan Bartlett said. “They have developed a good rhythm, they work well together and trust each other.”

Behind that O-Line, the Bears are averaging 211 yards rushing per game and 4.9 yards per carry for the season. The fewest rushing yards was 131 against unbeaten Stillwater but even there they averaged four yards.

A huge homecoming crowd — the Bears grandstand was packed and fans lined the fence from end zone to end zone — served as inspiration.

“When they did that baby powder thing before the game, that was really cool,” said Gerrell, referring to a white cloud launched from the student gallery.

Bartlett’s remarks to the team in the end zone after the game began with the fan support. “I told them it’s great to play before a big crowd like that and play well like they did,” he said.

Lewis-Royal scored on a 23-yard screen pass from Gerrell with 20 seconds left in the quarter for a 14-0 lead. He capped two more drives with a two-yard TD in the second quarter and a three-yard TD in the third quarter.

The 5-foot-6, 215-pound senior has scored 15 of the Bears’ 24 touchdowns in six games. Asked how he feels about being the team’s touchdown go-to guy, he grinned sheepishly, “I like it, but I feel a little guilty sometimes about other guys not getting them.”

Svir set up Lewis-Royal’s last TD with a 23-yard catch from Gerrell early in the third period, getting pushed out of bounds at the three.

But Svir notched one of his own late in the third period, covering 26 yards, as bowled over a defensive back at the seven and strode into the end zone for his first varsity TD.

Lewis-Royal’s touchdown catch in the first period was his first through the air. He took a screen pass from Gerrell on a play-action and had an open field. “I saw (wide receiver) Alex Lockwood throw a block downfield and knew I’d get it,” he said.

Lewis-Royal also got two of the Bears’ quarterback four sacks in the game. “They put me in on third-and-long plays,” said Lewis-Royal, who got his first two sacks. Bartlett said, “He’s probably our best defensive lineman but we need him too much on offense. Nobody can block him in practice.”

Anoka came into the game with quarterback Jacob Deutschman having logged 1,374 yards passing and nine touchdowns, but the Tornadoes never got untracked as the Bears had probably their best defensive game. Notching tackles-for-loss were Lewis-Royal, Zachary Pratt, Chris Heim, Nick Asper, Jontay Vaulx, and Michael Delaney.

“We wanted to put some pressure on him (Deutschman), and stop their rollout game, and we did,” said Bartlett. He credited the Bears JV, especially the receivers, for scout team play emulating the Anoka offense. “We had a great week of practice,” he said.

The Tornadoes, down 21-0, got on the board in the second quarter as Deutschman threw to Keenan Rodriguez for a 10-yard touchdown, two plays after hitting him long for a 40-yard gain. The Bears led 34-7 before Anoka got a 65-yard run by Wesley Lawver against the backups with 2:10 left.

Gerrell’s 11 completions went to seven receivers, with Svir catching two for 48 yards, Lewis-Royal two for 38 and Vatel Henderson three for 26.

The only flaw in the Bears game was on placements as Gerrell, the holder, mishandled two snaps on extra points, and Anoka blocked a short field goal attempt. Michael McCormack kicked two XP’s and Sloan ran for a two-pointer.

Remaining on the regular-season schedule for the Bears are Osseo (4-2) next Friday and Totino-Grace (0-6) the following Thursday, both on the road.