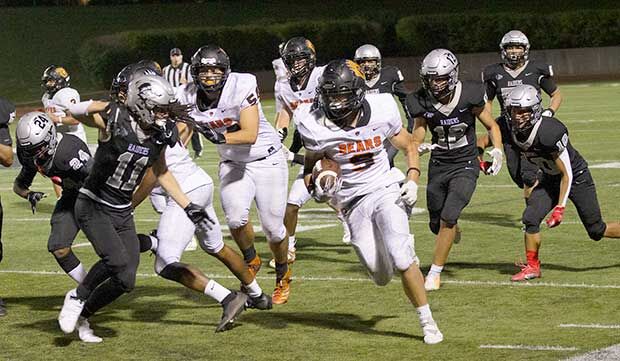 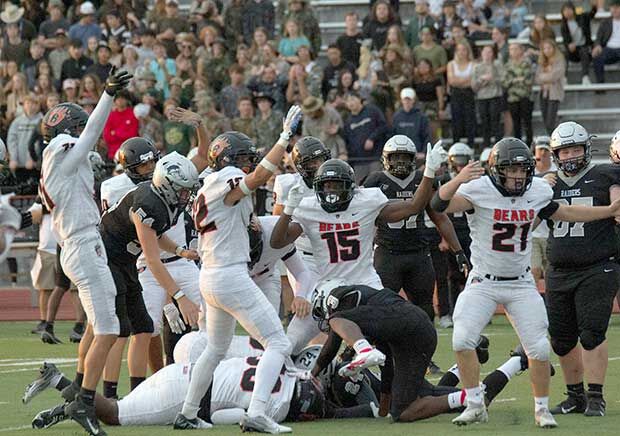 The Bears celebrate a fumble recovery. 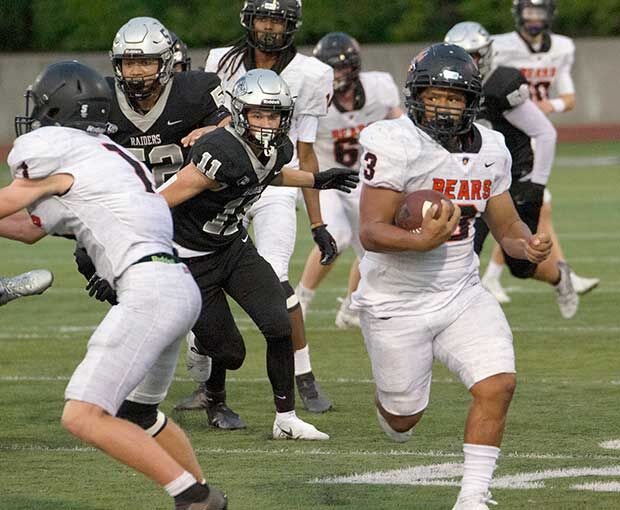 Anthony Lewis-Royal, who scored four touchdowns, runs for a first down, getting a block from Alex Lockwood (left). 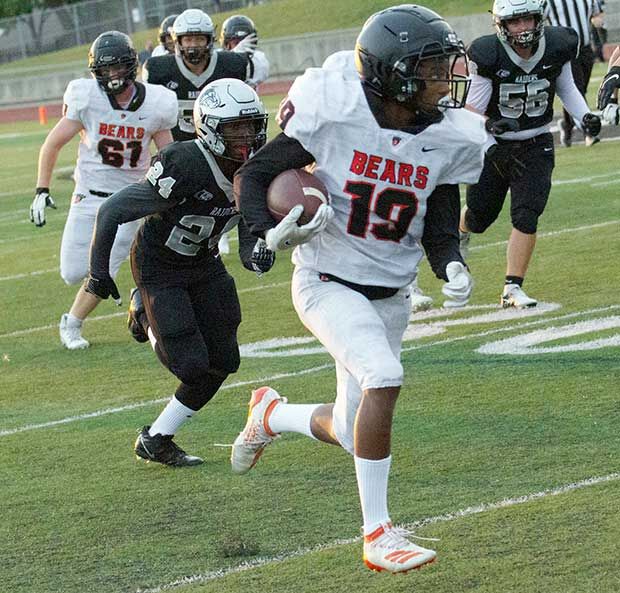 Reyshaun Brakes gets loose for a 14-yard gain.

The Bears celebrate a fumble recovery.

Anthony Lewis-Royal, who scored four touchdowns, runs for a first down, getting a block from Alex Lockwood (left).

Reyshaun Brakes gets loose for a 14-yard gain.

A dominating defensive performance by White Bear Lake and four touchdowns from Anthony Lewis-Royal lifted the Bears to a 27-0 win at Roseville Area on Thursday evening.

The Bears (1-1) held the Raiders (0-2) to 48 net yards. Matt Sloan made three quarterback sacks. The Bears limited Raider quarterback Isaiah Brown to a 4-for-15 slate for 11 yards, and their ground game to 37 yards on 26 plays. The Raiders lost 37 yards on four sacks, the other by Luke Calbrieth.

“The defense was outstanding. We played downhill and physical,” coach Ryan Bartlett said. Asked about leaders, he noted, “Sloan was really good, Zach Pratt was tough on the D-Line and Chris Heim was everywhere once again.”

Lewis-Royal capped four Bear drives with touchdown runs of two, four, 22 and one yard, while rolling up 101 yards in 19 carries. The 5-foot-9, 225-pound fullback has scored all seven of the Bears touchdowns in two games. Wally Venter kicked three conversions and the Bears failed on one two-point run.

“I don’t think I’ve seen seven touchdowns (from one guy) in two games before,” said Bartlett, in his 10th season.

The Bears offense mustered a modest 259 yards — 184 rushing, 75 passing — but the defense kept giving them short fields. A fumble recovery by Devin Madden set up one of the touchdowns.

Bear junior quarterback Connor Gerrell completed seven of nine passes for 75 yards with one intercepted. Alex Lockwood caught four for 58 yards, including a 24-yarder on which the Raiders stripped the ball and recovered the fumble. Matthew Currier carried eight times for 41 yards and caught a pass for 12 yards. Reyshaun Brakes gained 24 yards on three carries.

Roseville’s best chance was when they reached the 28 yard line in the third quarter. Brown went for broke three times but Michael Delaney and Vatel Henderson broke up passes at the goal line. Then a hard rush by Aiden Aikins on fourth down forced another incomplete pass.

The Bears will host Mounds View (1-1) next Friday.