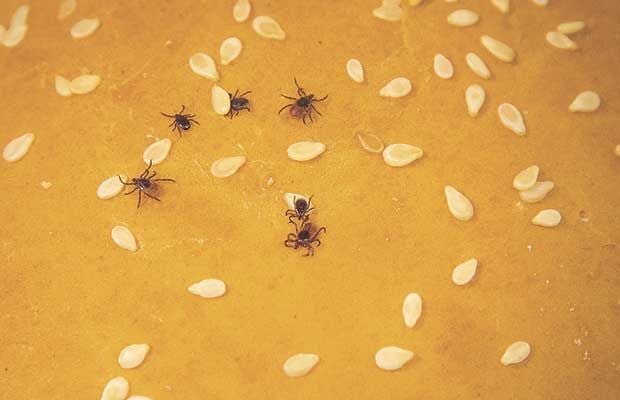 Nymphal deer ticks, which cause most of the Lyme disease cases, are tiny — about the size of a sesame seed. Adult deer ticks can also cause infection. 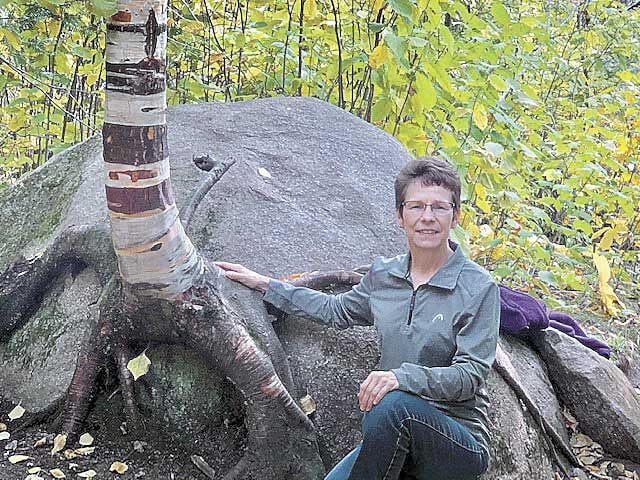 A Hugo resident who loves the outdoors, Brenda Peltier said she now “avoids the woods like the plague” for fear of ticks. 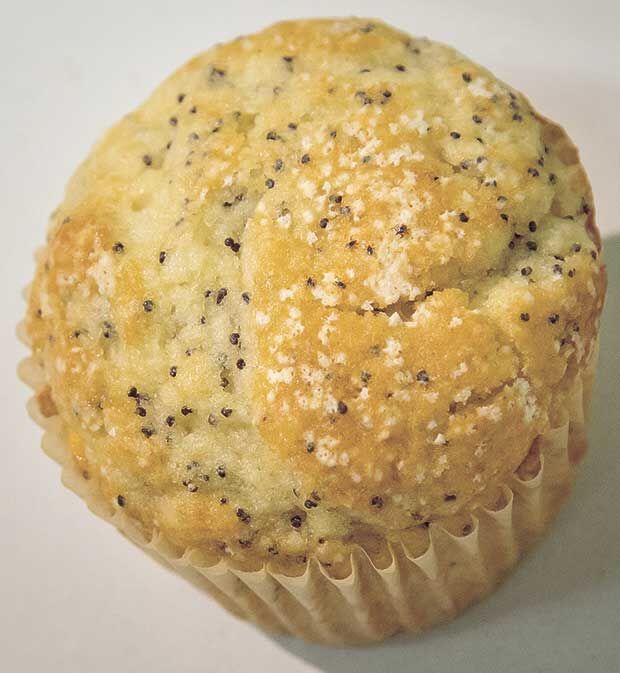 Nymphal deer ticks, which cause most of the Lyme disease cases, are tiny — about the size of a poppy seed. Adult deer ticks can also cause infection.

Nymphal deer ticks, which cause most of the Lyme disease cases, are tiny — about the size of a sesame seed. Adult deer ticks can also cause infection.

A Hugo resident who loves the outdoors, Brenda Peltier said she now “avoids the woods like the plague” for fear of ticks.

Nymphal deer ticks, which cause most of the Lyme disease cases, are tiny — about the size of a poppy seed. Adult deer ticks can also cause infection.

The month of May doesn’t just bring flowers. It also brings that nemesis of the great outdoors: the blacklegged tick that causes Lyme disease.

May is Lyme Disease Awareness Month. Talk to people who attend a local Lyme support group, and it becomes obvious the disease is endemic here, despite myriad efforts to preach prevention.

Preventing a tick bite remains the primary goal of the Minnesota Lyme Association (MLA), a 15-year-old advocacy group that holds monthly support meetings at the White Bear School District Center (or did, pre-COVID), in addition to hosting speakers with expertise on researching, diagnosing and treating tick-borne diseases.

Founded by Anne Myre of Scandia in 2006, MLA helps those afflicted by Lyme or tick-borne disease lead a healthy, vibrant life. She started the support group out of desperation as she was suffering from chronic fatigue and joint pain that was traced to a tick bite.

“When I began this journey, I wanted other people with chronic Lyme to know they weren’t alone. When I was first treated 16 years ago, I had to go to Colorado to get treatment. We’ve come a long way in understanding the disease, but it baffles me to this day that more doctors don’t pay attention to the issue.”

Lyme is the most common vector-borne disease in the United States. It is caused by the bacterium Borrelia burgdorferi, which is transmitted to humans through the bite of an infected blacklegged, or deer, tick. According to the Department of Health, Minnesota is one of 14 states that has the majority of Lyme disease cases. In 2017 (current data isn’t available), the rate was 25.2 cases per 100,000 people compared to the national rate of 9.1 cases per 100,000 people.

“Be aware that ticks are out, and there are ways to prevent a bite,” she emphasized. “It’s very important to never get the disease in the first place.”

An early attendee of Myre’s support group, Brenda Peltier, knows from experience. About a year after noticing what she thought was a heat rash, she was clinically diagnosed by an infectious disease doctor in Duluth. It was 2007. “By then, I was really sick,” said the Hugo resident.

The rash went away, but Peltier was left with “crushing” fatigue and joint pain. She ignored it. Then her eyelid drooped; in April 2008 she was bitten again. Ten days later, the bullseye rash appeared. Her family physician dismissed the rash and prescribed an anti-fungal cream. Two weeks later, she attended a MLA meeting, back when they met in a Forest Lake church, to hear a talk about gluten-free diets. “I asked them to look at my leg rash and they said, ‘Dude, that’s Lyme.’”

Peltier’s Lyme has persisted, as evidenced by more and more symptoms. Her primary care doctor passed her off to a neurologist, rheumatologist and then an ophthalmologist. She suffers headaches and joint pain, facial palsy and a disorder in her eyes that requires special prisms in her glasses. “Then it hit my heart,” Peltier said.

“I had all the symptoms of a heart attack,” Peltier recalled. She found doctors were “very dismissive of a Lyme diagnosis” and they “twice kicked me out of the hospital.” She’s not giving up, however, and after five cardiologists, her next step is to see an electro-physiologist. She’s expecting the doctor to recommend an ablation procedure due to her erythema but will be seeking long-term antibiotic therapy such as rifampin — something a physician “well-versed in Lyme” previously prescribed short term.

Peltier estimates her tests and treatments for tick-borne disease have cost about $75,000, most of it covered by good health insurance. She doesn’t feel her illness will ever be cured.

Her advice: “If you have the bullseye rash, you have Lyme. It’s not prudent to wait on a test. If done too early, the result will be negative anyway.”

There are advances in disease diagnostics, however, that offer speedy results.

Dr. Jonathan Otten, a naturopathic physician with Northern Lights Medicine who specializes in Lyme disease and other tick-borne illnesses, talked about diagnostics and treatment strategies during an April Lyme meeting hosted by the MLA.

“The disease is near and dear to my heart,” said the White Bear Lake doctor, who sees many chronically ill patients.

He is using a test developed by a German tick-borne disease expert to guide treatment plans and facilitate full recovery, “or as much as we can achieve with Lyme,” Otten said. The test is called ELISpot and is available through InfectoLab, an Oakdale diagnostic lab founded by the German doctor Dr. Carsten Nicolaus.

“The test offers a rapid, on-the-ground picture of the state of infection by measuring the presence of active (fighting) antigen specific T-cells,” Otten explained. “Often in patients who have been infected for a long time — chronically ill folks — the humoral immune response is negatively affected due to immune evasion or immunosuppression caused by the infection. Some people have been infected 20 to 30 years. The Western blot test won’t pick them up.”

Early symptoms of Lyme disease include a rash at the site of the bite, fever, chills, muscle and joint aches, muscle pain or swollen lymph nodes. Note that about 30% of people never develop an erythema migrans, a telltale rash that means there is Lyme disease.

Chronic issues that can be Lyme related are still “underappreciated” in the medical community, Otten said. If not diagnosed and treated early, Lyme can become persistent or chronic, as is the case with Myre and Peltier. Years later, the disease can be mistaken for multiple sclerosis (MS), Lou Gehrig’s disease (amytrophic lateral sclerosis, or ALS), fibromyalgia, chronic fatigue syndrome, Parkinson’s or mental illness.

Sometimes, treating a bite with two weeks of doxycycline (the commonly prescribed treatment) is not enough.

Otten discussed a case of a 57-year-old man who developed the rash in 2017 and received the two-week antibiotic regiment from his primary care provider. The rash resolved, which it will regardless of treatment, Otten said. The standard Lyme antibody test at the time was negative.

“In the next few years, he developed stabbing pains in his arms, forgetfulness and short-term memory loss, joint pain and some disequilibrium. We tested for burgdorferi, bartonella and babesia through InfectoLab. He showed all three.”

Otten said he started the patient on herbal antimicrobials, probiotics, 5,000 IU of vitamin D daily and a triple regimen of antibiotics using azithromycin, rifampin and minocycline. A single antibiotic won’t be successful if there is persistence, he said.

“There is a subset of patients who need ongoing treatment for years to control symptoms,” noted Otten. “In those cases, I’m always looking for what else is going on that the immune system doesn’t recover.”

After two months, the chronic pain is significantly reduced, and cognitive function is back to normal. In March, the bartonella was negative and babesia “trending towards resolution. The Lyme is also trending in the right direction. Why is this helpful?” he asked. “It shows babesia and Lyme appear to be persisting.”

Another drug Otten uses for chronic sufferers is disulfiram, an antimicrobial for borellia persistence. “Used for alcoholism, the drug got a lot of attention in the Lyme community,” Otten said.

“Prevention is difficult, but not as difficult as treating a disease that’s been smoldering for months or years.”

New patients or anyone interested in learning more about Otten’s practice can visit northernlightsmedicine.com.

2. Landscape to discourage ticks from hanging around your yard. A tick management handbook describes steps at mnlyme.org.

3. Use sprays containing permethrin on your clothing, footwear, camping and hunting gear and 30% DEET or 20% picaridin on your skin.

4. Tuck shirts into pants, pant legs into socks, tie up long hair and tuck it into a hat, etc., to inhibit tick movement.

5. Promptly put tick-exposed clothing into the dryer on high heat for 60 minutes if wet/damp or 15 minutes if dry. Take a shower; vigorous scrubbing will remove ticks that aren’t fully attached.

6. Check yourself and your animals for ticks immediately and for several days after being in a tick-infested area. Make tick checks a habit for all family members after any outdoor activity. The sooner ticks are found and removed, the less chance you and your family have of becoming infected.

7. Carefully remove and save any attached ticks for your doctor to identify.

If you are bitten, have a discussion with your doctor about using antibiotics to prevent disease. It’s important to know that:

• Waiting to see if an EM (erythema multiforme) rash develops is risky, because some patients will never develop one

My first symptoms of ALS occurred in 2014, but was diagnosed in 2016. I had severe symptoms ranging from shortness of breath, balance problems, couldn't walk without a walker or a power chair, i had difficulty swallowing and fatigue. I was given medications which helped but only for a short burst of time, then I decided to try alternative measures and began on ALS Formula treatment from Tree of Life Health clinic. It has made a tremendous difference for me (Visit w w w. treeoflifeherbalclinic. com ). I had improved walking balance, increased appetite, muscle strength, improved eyesight and others. ]

My husband was diagnosed with ALS when he was 63 years. we visited Mayaka Natural Clinic Website and ordered their ALS/MND Formula, i am happy to report the treatment effectively treated and reversed his Amyotrophic Lateral Sclerosis (ALS), most of the symptoms stopped, he is able to walk and able to ride his treadmill again, he is pretty active now. visit www. mayakanaturalclinic .com

This was great, I have been researching for a while now, and I think this has helped. Have you ever come across Kykuyu Health Clinic Amyotrophic Lateral Sclerosis HERBAL FORMULA (just google it). It is a smashing one of a kind product for reversing ALS completely. Ive heard some decent things about it and my buddy got amazing success with it.

This was great, I have been researching for a while now, and I think this has helped. Have you ever come across Kykuyu Health Clinic Amyotrophic Lateral Sclerosis HERBAL FORMULA (just google it). It is a smashing one of a kind product for reversing ALS completely. Ive heard some decent things about it and my buddy got amazing success with it.