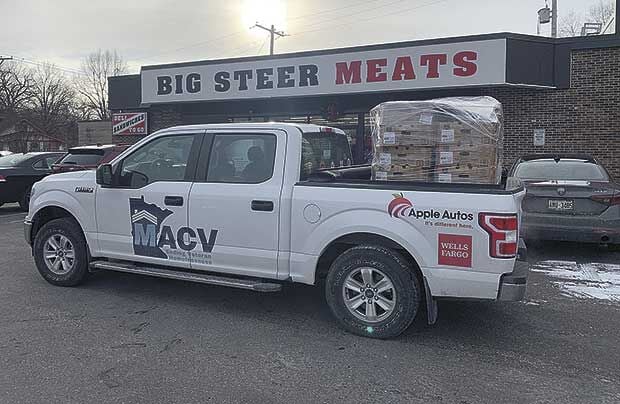 MACV staff pick up pallets of venison and other game at Big Steer Meats in St. Paul for distribution to National Guard soldiers. 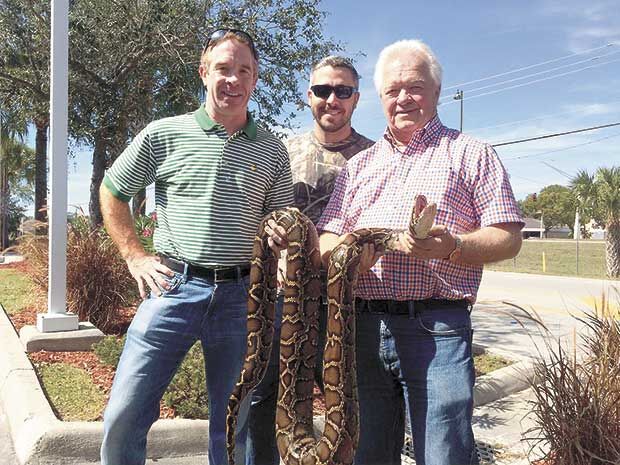 Burmese pythons are unwanted species in the Florida everglades, and hunters are welcome. When Rich Bohaty, right, with son Brian, left, and Paul Shannon, bagged a 16-footer, he froze the meat and had it smoked. The snake was served at that year’s game dinner. “There wasn’t a piece left,” Bohaty said.

MACV staff pick up pallets of venison and other game at Big Steer Meats in St. Paul for distribution to National Guard soldiers.

Burmese pythons are unwanted species in the Florida everglades, and hunters are welcome. When Rich Bohaty, right, with son Brian, left, and Paul Shannon, bagged a 16-footer, he froze the meat and had it smoked. The snake was served at that year’s game dinner. “There wasn’t a piece left,” Bohaty said.

Forty years of wild game feasts that fed as many as 800 guests on behalf of wildlife conservation are a thing of the past now, due to the pandemic. But that didn’t stop the dinners’ founder, Rich Bohaty, from continuing his passion to give back.

The man with a hunter’s heart has a new mission that serves both past and current members of the military, as well as first responders during the holidays.

The giving campaign is called Hunters Harvest, a nonprofit started by Bohaty and his family, whose mission is to ensure no one who serves goes hungry. In keeping with that mission, they are partnering with the Minnesota Assistance Council for Veterans, or MACV.

Staffed mostly by retired military members, the nonprofit organization was established in 1990 with the singular purpose of ending veteran homelessness.

Bohaty reached out to MACV’s chief operating officer, Jon Lovald, even before Hunters Harvest existed asking how to donate meat to soldiers returning from deployment.

“I was sitting on a lot of wild game last winter usually reserved for the dinner that we didn’t know what to do with,” Bohaty recalled. “Top (military) brass would attend my dinners, so I thought, ‘Let’s support deployed troops returning home.’” So he contacted Lovald, a retired lieutenant colonel who advocates for the state’s veterans.

“When Rich called, we wanted to figure out how to help him,” Lovald said. “While we are not the National Guard or U.S. Army, our reach goes back far enough to facilitate that donation. We knew which units were returning and we were able to make contact. With the nonprofit set up, we were more prepared this year.”

Thanks to donors and volunteers, Hunters Harvest, with help from MACV, donated 175 boxes of assorted meats, plus 110 hams and 75 turkeys over the holidays to support military personnel and their families.

Packs of donated meat sticks, too, are used by MACV’s outreach team for homeless vets. “Prepackaged meats are perfect for that,” Lovald said. “People on the street or in emergency housing are dealing with a lot of trust issues. Our team puts a business card and meat sticks in their hand. It helps build trust with that veteran.”

Bohaty’s legendary game dinners at the Prom Center served a dual purpose during its long life span. Not only did the event serve as a major fundraiser for Pheasants Forever, an organization close to Bohaty’s heart, but his hunting buddies had a worthwhile outlet for their meat, which included venison, bear, elk, wild boar, pheasant, gator — even snake.

The longtime White Bear resident developed an interest in upland conservancy as a youngster pheasant hunting in southern Minnesota with his dad and uncles. As the years went by, his passion lead to an interest in conservation, where he focused his energy on preserving pheasant habitat. Since 1982, Bohaty has been a volunteer and major donor to Pheasants Forever’s Build a Wildlife Area land acquisition project. His dinners evolved to be one of the largest giving campaigns for the organization, which honored Bohaty with a Lifetime Achievement award.

Affectionately called “boss” by his many friends, the 79-year-old says he’s up before dawn to “hit the gym,” but Bohaty isn’t out beating the bushes hunting game like he used to. His role these days could probably be best described as tour guide.

A snowbird who winters in Florida with wife Anna, Bohaty enjoys hosting friends who like to boar hunt in the Sunshine State or track pythons in the Everglades. “I have hunting blood in me and can never give it up,” he said.

Calling her dad “a special person,” Amy Bohaty said her family is proud of him. “My dad has a long history of conservancy and philanthropy,” she noted. “Both he and my mom have given a lot to their community.”

For those who may not know, the Bohatys owned Ciresi’s Liquor on Third Street in downtown White Bear Lake for about 40 years. They bought the business from Anna’s father, Samuel Ciresi, who opened the store in 1952. The Bohatys also owned the Piccadilly restaurant in Mahtomedi for about a decade, Amy said, selling it in the late ’80s. In fact, that’s where the game dinners started.

He recalled a conversation from the Hunters Harvest founder that went like this: “Rich calls from Florida and says, ‘Jonny (he calls me that), have you ever had gator? I’m sending some home for you.’ My wife asked, ‘who are you talking to?’ I said, ‘I’m talking to the meat guy.’”