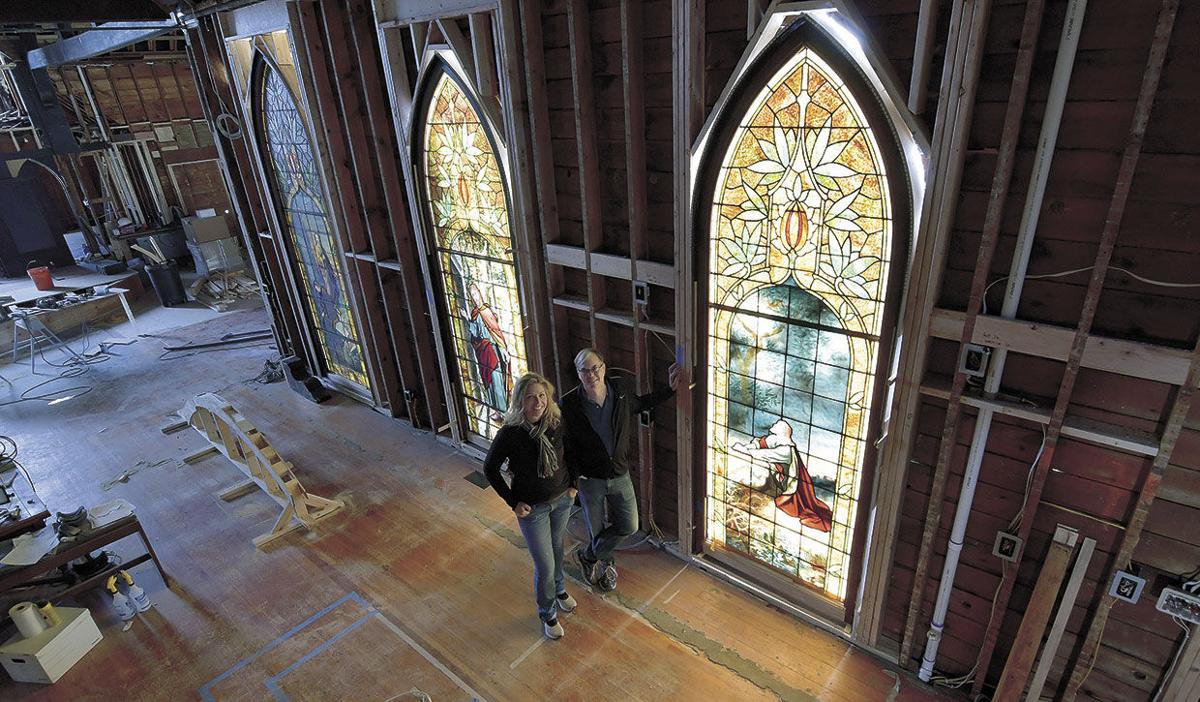 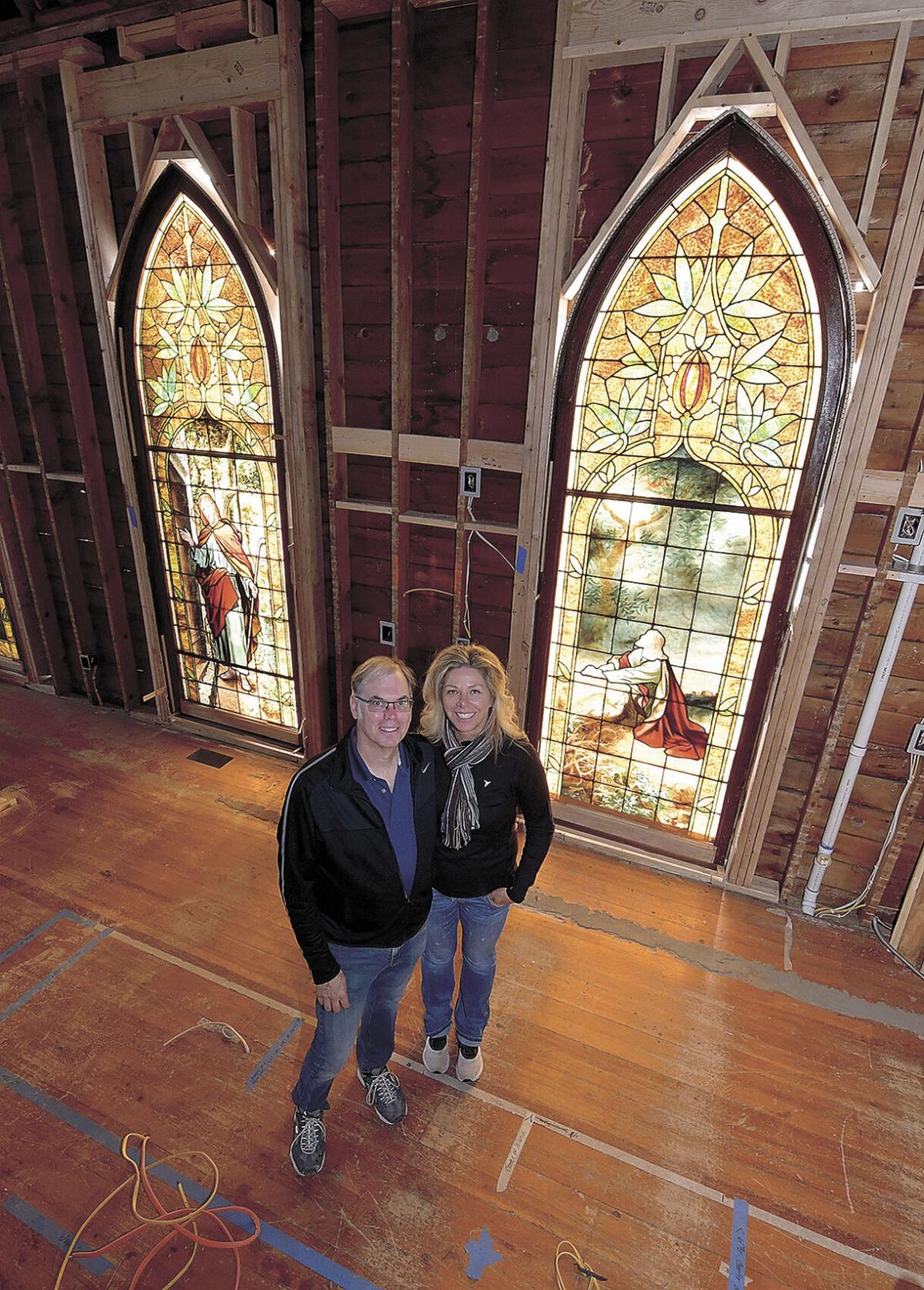 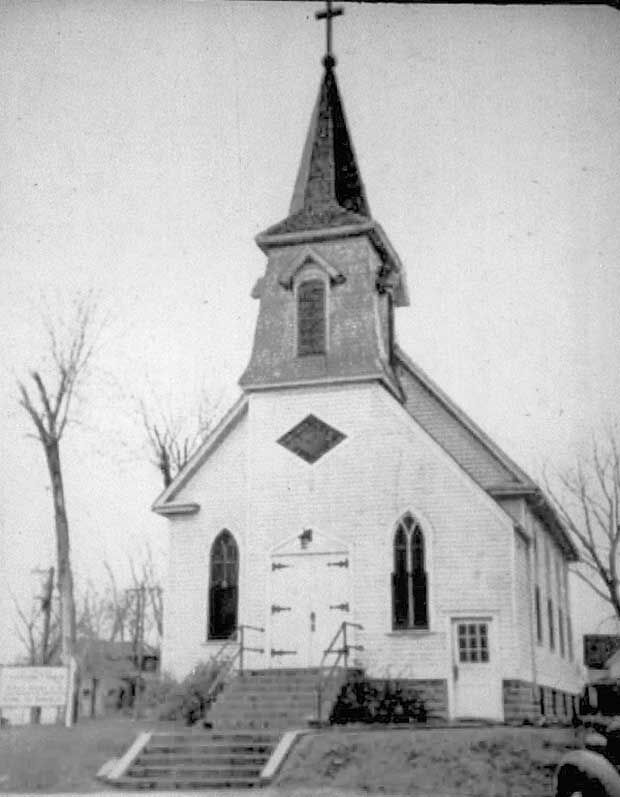 The building served as a church to several denominations prior to becoming the home of Lakeshore Players.

The building served as a church to several denominations prior to becoming the home of Lakeshore Players.

When a castle in Ireland seemed too fanciful and the perfect barn too uncommon, a Minnetonka couple found the perfect compromise for their new home: an old church turned theater turned vacant.

Luck played a part in their discovery of the former Lakeshore Players Theatre at 4820 Stewart Ave. in White Bear Lake. And Kelly Clement and Steve Bucher are quite thrilled about it.

A woman who works for Clement was told by her Realtor cousin last Thanksgiving that the building had been sold. She told him that her boss was looking for an old church and would its new buyer, a local builder, be interested in selling? The answer was yes. So Clement and Bucher drove to White Bear Lake the day after Thanksgiving to see the property. You could say it was love at first sight.

They bought it, closing on the property Jan. 31. The old 1889 church was saved in the nick of time as the structure was due for demolition.

Why a church? “I’ve always wanted a castle in England or Ireland or a ruin to build a house around,” Bucher replied. “Kelly always wanted to rebuild a barn. A church seems to slot in the middle of those visions. It addresses both of our desires.”

The main attraction for the couple was the stage. They are both musicians who play multiple instruments, including Bucher’s 9-foot concert grand piano, and the stage offers a permanent spot for their equipment. Jam sessions with other musicians are also in their plans. They believe the venue will be “sought after when people in the music community find out what we have.” Clement used to hold garage jam parties and “loves to invite neighbors over and play music together.”

Both admit they didn’t realize the intensive remodeling project they were getting themselves into. In the end, they fully believe the investment will be worth it.

The couple partnered with Legacy Contracting Inc. of Elk River to tackle the job. Co-owner Jeff Eirich said the first time he entered the old theater, the power was off, so flashlights were required. “It was still the theater,” Eirich recalled. “The stage and seats were still here. We were crawling around looking at the structure.”

That was in January, and the contractor’s team has been there every day since. Eirich figures at least 50 people are involved in the challenging project.

Progress is slow but steady.

An unexpected, but glorious, snafu to the project is the installation of a set of fabulous stained-glass windows they rescued from an appalling fate.

“The windows fell into our lap in a weird way,” Bucher said. “The original windows were sold when the Lutheran church left and replaced with a low-grade colored glass called kokomo. They’re crazy expensive to replicate. We asked a stained-glass guy in Minneapolis if he ever salvages something that size. He said, ‘Funny you should ask.’ He showed us this historic glass from the 1880s that he said could end up in a dumpster.”

Curious passersby stop in on a daily basis, Eirich said. “Neighbors tell us their children were baptized in the church or they attended a wedding there. People are glad it still looks like a church.”

Originally a Swedish Evangelical Lutheran Church in the 1880s, the building on the corner of Stewart and Sixth Street later became a Baptist Church (in 1959), the beginnings of what has become Eagle Brook Church, noted Historical Society Executive Director Sara Hanson. “There were two Lutheran churches on Stewart a block or two apart. One was German and one was Swedish. Eventually, they merged to become First Lutheran and ultimately moved down by County Road F. Today, the church is Community of Grace.”

Lakeshore Players Theatre purchased the property in 1969 after its first home on Second Street burned down. That building was a former Presbyterian Church that the theater purchased in 1957. Lakeshore vacated the Stewart Avenue theater when the new Hanifl Performing Arts Center was completed.

Clement and Bucher are aware of the building’s long history; it’s the oldest surviving church building in White Bear Lake. They consider it a landmark that should be preserved and want to keep it as original as possible.

The Douglas fir floor will be refinished and the lighting kept as original as possible. “It’s hard to grasp all the work the contractors have put into this,” Clement said. “We are here every day to say, ‘yes do that’ or ‘no, let’s not do that.’”

Other highlights for the interior are a 20-foot, ornate 1880 wooden bar, complete with mirror, salvaged from a Boyd, Wisconsin, tavern that will sit house left. Legacy is refinishing the large piece. Bucher is getting his dream German kitchen and the master bedroom will be lofted above the entrance. A dual water closet will occupy the old box office space to the left of the foyer. A 500-gallon koi pond is also part of the remodeled foyer. The outside brick sign will stay with some sort of plaque and the front will be landscaped like an English garden with black wrought-iron fence.

The theater’s 3,500-square-foot basement has been turned into three bedrooms, a bath, living area and large storage/office space. The room is well suited for Clement, who works from home as a commercial/residential audio/video rep. Bucher is a retired electrical engineer and patent attorney. He retired at 45 after selling his business to a California competitor.

Solar panels will be installed on the new roof in the energy-efficient home, which has three heat pump systems that continually circulate hot water. The only gas required — besides the kitchen range — is to heat the garage. Everything else is electric. They figure the solar payback will take six years.

“City staff have been great to work with,” noted Clement, who is originally from East Grand Forks. And they love White Bear Lake.

Although they wouldn’t say how much they’ve sunk into their dream home, the project is in the multimillion-dollar range, according to Clement, who jokingly adds, “we’ve lost our minds.”

“We knew it would be more work than we thought, added Bucher. “This isn’t one of those projects where this is the plan, let’s stick to it. This is more a vague vision that is evolving.”

Asked their target move-in date, both laughed and said, “What year?” They hope to occupy their “castle” in January. That would be 2021.

Glad it wasn't torn down. I spent many years in this place when it was Lakeshore Players Theatre. Now i volunteer at the new bldg.

I'm so happy to hear that this building will be preserved! My husband and I met in the basement at an audition, so it's very special to us! Let us know if you ever want to sell!

I am also very happy this awesome Historical Bldg is being preserved, and not torn down. This precious bldg. has so many memories for so many people - from the first church, a Beautiful Lutheran Church, to a Beautiful Baptist Church, to an Awesome LAKESHORE PLAYERS THEATRE, for over 50 years. I was fortunate to be one of the actors on that amazing stage where, along with my fellow Thespians, we Sang, Spoke, Laughed, and Cried, for wonderful caring audiences. I also worked in the Sound/Lights Booth, which was so much fun. I Love this Building, and I Love this Article. It gave such a great history lesson. Thank you. I would love to go there and be a part of a musical get-together with other musicians. This would be so cool. The instrument that I would bring is my voice. Again, thank you. And thank you to this amazing couple for doing this big venture, and saving this beloved building.