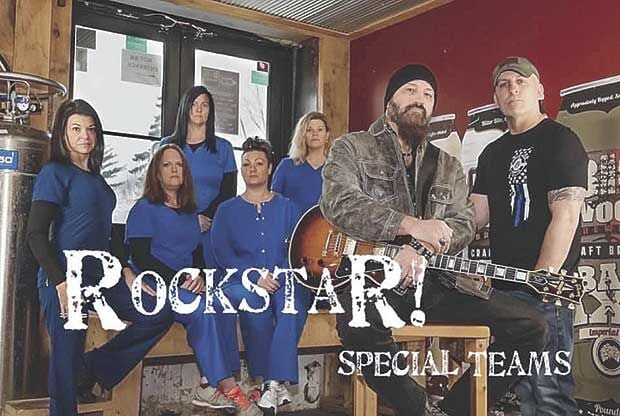 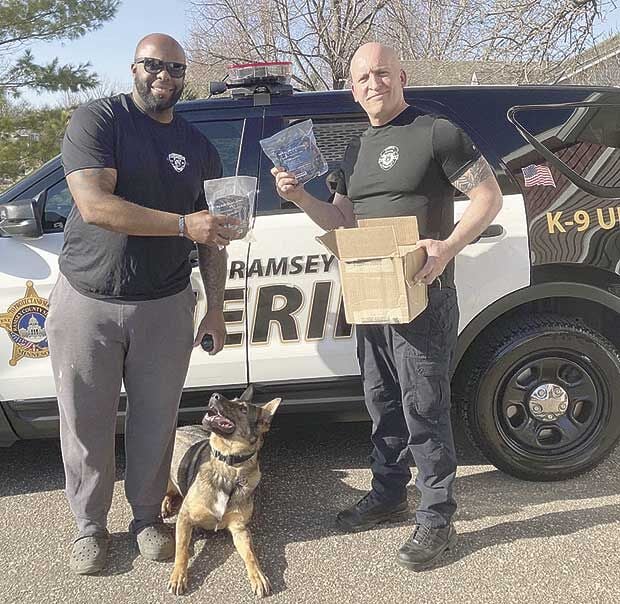 Ramsey County K-9 Cross watches his handler, Deputy Boddie, who accepts a foldable litter for canines from Jeff Loeks. The pouch fits in a uniform pocket for emergency use. 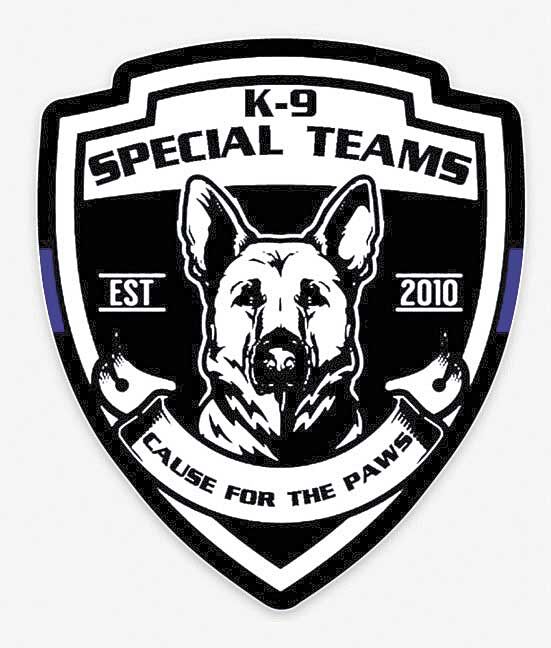 Anyone wishing to purchase a $20 T-shirt, hoodie and other apparel can order them on etsy.com. Search for Special Teams Shop. They will also deliver to people who message them via Facebook. 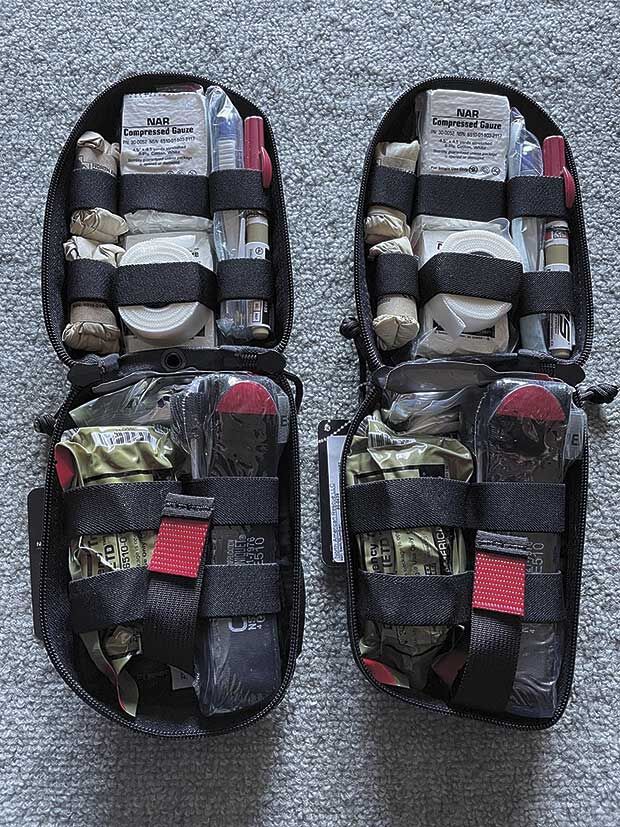 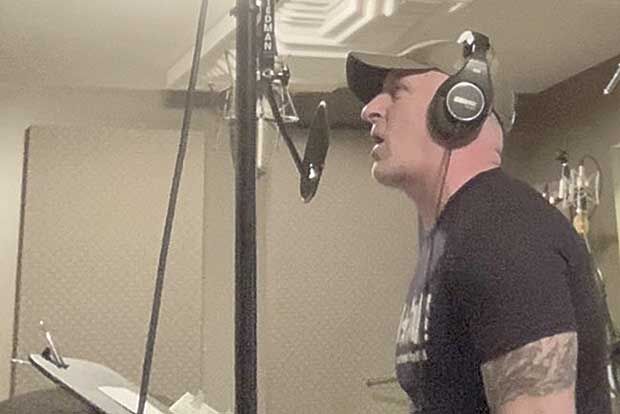 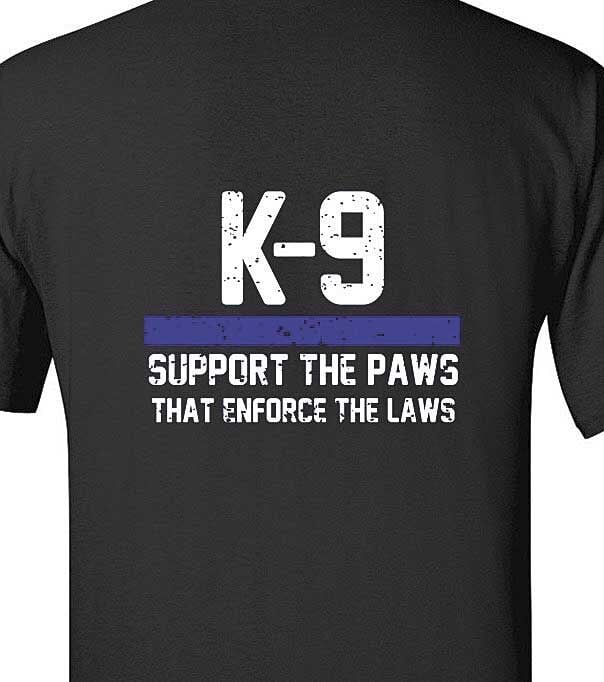 Ramsey County K-9 Cross watches his handler, Deputy Boddie, who accepts a foldable litter for canines from Jeff Loeks. The pouch fits in a uniform pocket for emergency use.

Anyone wishing to purchase a $20 T-shirt, hoodie and other apparel can order them on etsy.com. Search for Special Teams Shop. They will also deliver to people who message them via Facebook.

A Ramsey County K-9 officer named Cross is getting a custom-fit protective vest, thanks to that All-American wardrobe staple known as a T-shirt. That and efforts by a White Bear charity that’s selling them.

Special Teams Charities founder Jeff Loeks and wife Racheal are at it again, promoting a new mission called “Cause for Paws” through T-shirt sales and other apparel, including a popular bandana for dogs.

Money they raise is going for K-9 vests, medical kits and litter carriers for injured four-legged officers with the Ramsey County Sheriff’s Department.

According to Loeks, “Law enforcement dogs are playing a larger role as people become more violent, and there’s more guns so they’re getting hurt more.”

The former emergency room technician who now works security at Regions Hospital makes a difference with T-shirts. Loeks has sold them to help the homeless, raise awareness of violence against health care workers and for military causes.

This year, he and Racheal are focusing their efforts on the county’s K-9s.

Loeks contacted both St. Paul and Ramsey County about the fundraiser and learned that St. Paul’s department was already well funded. Ramsey County, he was told, depends more on donations.

The Loeks live in White Bear Township, which is served by the Ramsey County Sheriff’s Department, so Special Teams was happy to help — something Loeks has been doing for 10 years.

Something Press readers may not know about Loeks, who has appeared in the newspaper multiple times for his charitable causes: He won a Rap-off contest at First Avenue in 1988.

Loeks dusted off his vocal cords and put his singing talents to use again by recording a rap song called “Rockstar” with the Devon Worley Band. The song, now available on iTunes and Spotify, was recorded as a thank you to health care workers and law enforcement “for what they have done during COVID,” Loeks said. “I know firsthand working at a hospital. It changed everyone. It’s a nod to them.”

Both his son Marshall and stepson Kyle played guitar on the song.

He admits he detests rap music now, “but I was really into it back then. You couldn’t pay me to listen to it.” A record release party is planned at the brewery in the near future.

As for “Cause for Paws,” apparel sales are going gangbusters all over the country, Loeks said.

“I’ve probably done 25 big events since starting the charity, and this one has exploded. I can’t keep up. It’s been unreal. I think it gives people a way of supporting law enforcement who are hesitant to do it publicly.”

Lyrics to his song hold to that theme:

“To everybody in a squad car wearing a badge, I know that the hate seems to be the fad.

Dealing with the crap that we know that you do. Protecting the people who say that they hate you

You and all the firefighters and the EMS save a home, save a life in a bulletproof vest.