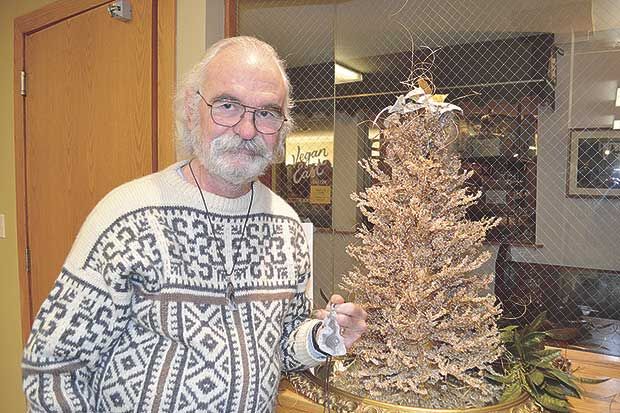 Jim Hunt models an agate necklace he made. The stones used in his agate jewelry come from Africa, Brazil and Mexico and have names like Botswana Blue, Mexican Lace and Mexican Moss. 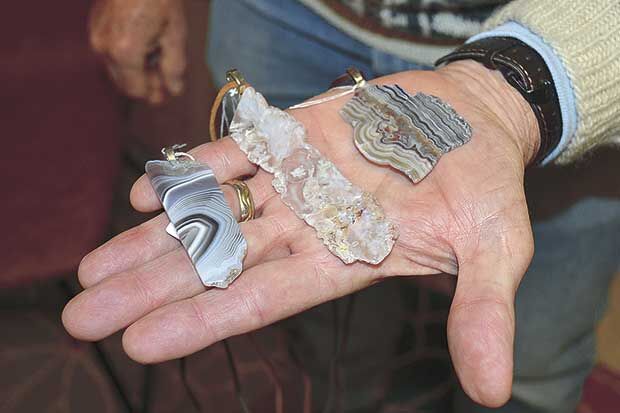 The stones used in his agate jewelry come from Africa, Brazil and Mexico and have names like Botswana Blue, Mexican Lace and Mexican Moss.

Jim Hunt models an agate necklace he made. The stones used in his agate jewelry come from Africa, Brazil and Mexico and have names like Botswana Blue, Mexican Lace and Mexican Moss.

The stones used in his agate jewelry come from Africa, Brazil and Mexico and have names like Botswana Blue, Mexican Lace and Mexican Moss.

Retired 3M engineer Jim Hunt loves rocks, especially agates. His fondness for the gemstones became more than a hobby recently after his son convinced him to open an Etsy shop.

"Creation of the shop came from my desire to spread the joy of viewing agates to more people," explained Hunt, who rekindled a boyhood obsession to collect agates two years ago.

What the Mahtomedi rock collector enjoys most about the uniquely patterned stone is not knowing whether it will be a "treasure" or a "driveway rock" when split in two. Finding wild agates is a matter of luck, Hunt said. "It's much like fishing versus catching. You can go hunting for them, but finding them is another problem."

The beaches along Lake Superior have long been popular destinations for agate hunters. Hunt is among them but hasn't had found much success of late. COVID brought people out in droves to agate hot spots on the lake, he said.

Agates can be found around the world. They form in pockets of volcanic rock, Hunt explained. Superior's north shore consists of volcanic rock called gabbro, which explains why agates are found there. Reddish volcanic rock called rhyolite is also a source of agates found in the Upper Peninsula.   Lake Superior agates are usually too dense for jewelry, so Hunt prefers stones from Brazil, Africa and parts of Mexico. He buys agates from a wholesaler in South Dakota that sells the rocks by the pound. How often does Hunt hit a treasure among them? "Better than a third of the time," he replied.

His children convinced Hunt to share the beauty of agates on Etsy after he started giving them away as gifts. Son Luke and daughter-in-law Mallory constructed the website, which went live last month. "We'll split any profit," Hunt said. "It's a joint venture."

Fellow White Bear Lake Rotarian Pam Tschida also invited Hunt to display his jewelry in her salon, Shear Reflections, in Avalon Mall. The necklaces are sold at a third location, MacRostie Art Center in Grand Rapids. Prices range from $50 to $75.

The pandemic is partly to blame for re-igniting Hunt's lifelong love for rocks. He used downtime at his and wife Deb Lauer's cabin in northern Minnesota to hone his agate hobby. It's also when he bought a rock saw to cut the thin slices of stone for the pendants.

His goal, Hunt said, is to get agates out to more people to enjoy. "I was looking for a way to show the treasures and spread the joy of agates," he stated. "Necklaces seemed easiest."

Growing up in White Bear, Hunt remembers riding his bike as a kid to a gravel pit to search for agates. "What bugs me," he exclaimed, "is I can't remember where it was."

To find the necklaces on Etsy.com, search for AgatesAndBeyond.