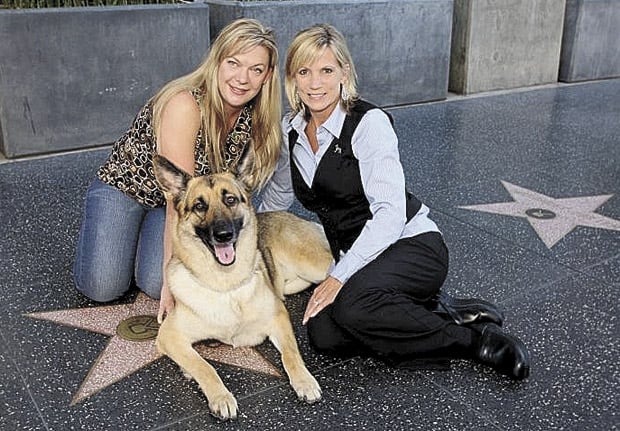 The legendary RIN TIN TIN has a star on the  Hollywood Walk of Fame. Here No. 12 poses with his trainer Rhonda Meath, right, and Dorothy Yanchak, president of RIN TIN TIN Inc. — Submitted 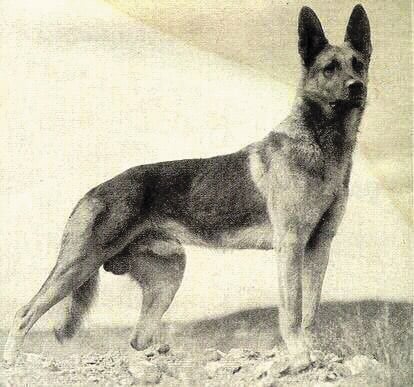 The original RIN TIN TIN was found in a bombed out dog kennel in France during World War I and brought to California by Cpl. Lee Duncan. He made 26 films during the silent movie era of the ‘20s, dying unexpectedly in 1932 at the age of 14. — Submitted 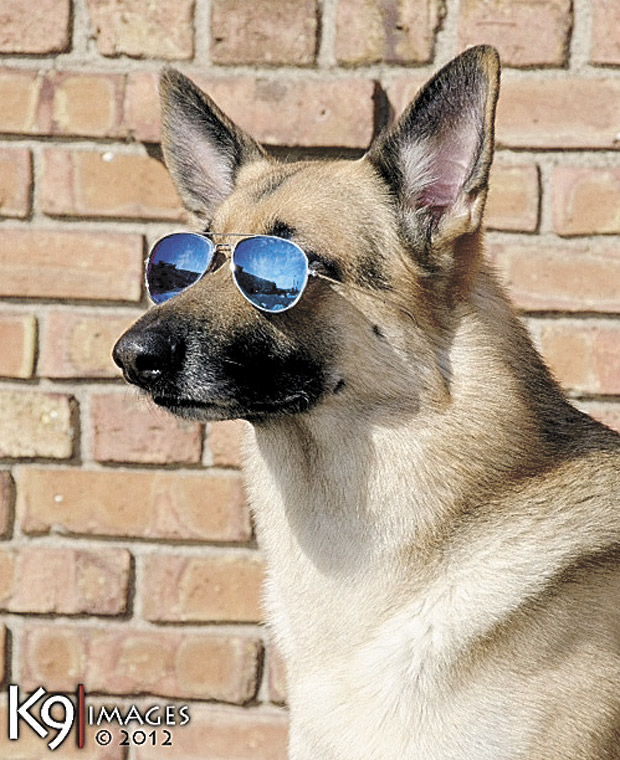 Rin likes to “clown around” and willingly poses with sunglasses. — Submitted

The legendary RIN TIN TIN has a star on the  Hollywood Walk of Fame. Here No. 12 poses with his trainer Rhonda Meath, right, and Dorothy Yanchak, president of RIN TIN TIN Inc. — Submitted

The original RIN TIN TIN was found in a bombed out dog kennel in France during World War I and brought to California by Cpl. Lee Duncan. He made 26 films during the silent movie era of the ‘20s, dying unexpectedly in 1932 at the age of 14. — Submitted

Rin likes to “clown around” and willingly poses with sunglasses. — Submitted

Back in the 1920s, a sable-colored canine named RIN TIN TIN not only saved the day, but saved a struggling Hollywood movie studio from bankruptcy. More than once.

It was said in a biography of the silent screen star that every time Warner Brothers Pictures was close to financial ruin, the studio released a new RIN TIN TIN movie to bring it back from the brink.

Baby boomers may remember the ’50s television show “The Adventures of RIN TIN TIN” starring the German shepherd and his boy pal Rusty, an orphan being raised by cavalry soldiers at Ft. Apache. That dog was RIN TIN TIN No. 4. He starred in 164 episodes of the series from 1954 to 1959.

Today the famous name lives on in RIN TIN TIN No. 12, a descendant on his mother’s side of the original dog. His handler/trainer is Rhonda Meath, an ’81 White Bear Lake High School grad who accompanies the celebrity canine around the country. She describes herself as the “dope on the other end of the rope” whose duties include protector, baggage handler and poop picker-upper.

To be RIN TIN TIN, a German shepherd must be consistent in temperament, type, intelligence and color as dictated by RIN TIN TIN Inc., the only authentic breeder. Five generations of one Texas family have maintained the legacy since the late ’50s. The bloodline in fact is one of the oldest continuous lines in the breed’s 112-year history.

Most important among the traits is temperament. “They must be people-oriented,” Meath said, “but have the whole package. Rin needs to do agility (RIN TIN TIN could leap an 11-foot fence), turn it on for the camera (he’s a big ham) and be petted 1,500 times a day by a lot of people.”When he travels in public, RIN TIN TIN wears a sparkly diamond-like collar, a trademark almost, that recalls the 1929 movie “A Million Dollar Collar” starring No. 1.

The original RIN TIN TIN was found on the battlefields of France during World War I. That fateful day in 1918, a corporal named Lee Duncan decided to search what was described as a bombed out war dog kennel in Lorraine, France. He found the male puppy still alive and eventually the pair returned to Duncan’s home in California.

Named by Duncan after a French puppet, RIN TIN TIN went on to become a star of silent movies, dying unexpectedly in the arms of Jean Harlow in 1932 after making 26 films.

It was Hereford who contacted the German Shepherd Dog Club of Minneapolis and St. Paul searching for No. 12. The sable male met all the requirements and carries titles in agility, obedience and rally events. Meath said the dog knows 26 tricks, is learning to herd sheep (something they are bred to do) and responds to voice and hand commands at scripted celebrity events.

The current RIN TIN TIN is the official spokesdog for the American Human Association (AHA) Red Star Emergency Services program that travels to disasters and assists animals in need, similar to the Red Cross. He and Meath traveled to Los Angeles last fall to receive the AHA 2011 Legacy Award in honor of his duties.

Rin travels in an airline seat next to Meath, has his own carry-on bag and is often the center of attention. When they went to the AHA event, the 80-pound Rin had a driver and personal bodyguard.

He also rang the closing bell at the New York Stock Exchange in honor of four-legged heroes of “Sept. 11”. Meath accompanied RIN TIN TIN to the National Arts Club in New York City last September for the 10th Anniversary Tribute to the Hero Dogs of 9/11.

Everywhere they go, people want their picture taken with the famous TV star. During an interview at Ingredients in White Bear Lake (Rin loves their potato chips), a woman in her late 50s inquired about his collar. When Meath told her who the dog was, the woman said she had “goose bumps” to think it was actually a RIN TIN TIN she watched on television as a child. He was happy to pose for a picture.

The two do a lot of community service work in addition to special appearances. Meath takes Rin to the Anoka County Correctional Facility in Lino Lakes for a little canine therapy with incarcerated juveniles and works with Anoka County 4-H groups on dog agility training.

“Everything came to be for me,” said Meath, who has worked with dogs, particularly shepherds, since she was 12. “It is a gift every day to work with him, train him and show him. Kids love him and he loves them. It’s definitely his calling.”

It constantly amazes Meath how fascinated people are with the dog. “People recognize his name. Just like Lassie; only we like to joke: If Timmy had a German shepherd dog, he wouldn’t have fallen in the well in the first place.”

The RIN TIN TIN ambassador is only 3 years old, but happily carries the moniker of an American icon.

“We want young kids to know about RIN TIN TIN and keep it alive,” Meath said. “That was the late Duncan’s dream: That there will always be a RIN TIN TIN.”

RIN TIN TIN is making daily appearances at 5:45 p.m. at the Minnesota State Fair. His trainer/handler, Rhonda Meath, will do a demonstration and provide history of the famous dog, as well as the breed in general. They precede the St. Paul Police K9 exhibition by the Pet Center.

This is an amazing story, although I have not seen it I heard a lot about that show. Such show dogs are so brilliant and if you want you can also train up your k9 friend the way you want. I own a couple of dogs and I have sent all of those to the dog boot camp.

We do love these onscreen canines, I have seen many shows that featured adorable canine characters. These shows actually made me fond of the dogs and I adopted two street dogs. They are still with me and I always take care of their health, I take them to the best Tucson veterinarians.

This show is one of the most legendary k9 shows we have ever seen. I love watching these shows more because I have two pet dogs at home. I have recently found a great dog day care facility for them, a friend informed me about dog kennels in Michigan at PawPrintInn.com, they offer great care and service.

In our house both kids and adults love watching this show. We all love the adorable k9 character, he really amazes us with his brilliant performances. He must have gone through finest k9 training program for doing the show.

that dog is no more RinTinTin than my left shoe. that family stole the name and bankrupted my family. i had the REAL RinTinTin, the dog from the tv show, and i have his decedents now. my grandfather would be horrified by this article and pissed at those people.