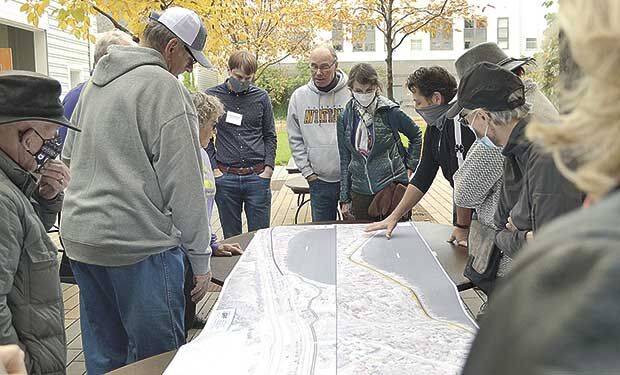 Doug Dorschner, in the gray hoodie, studies the latest trail map with his Bald Eagle neighbors at the open house. 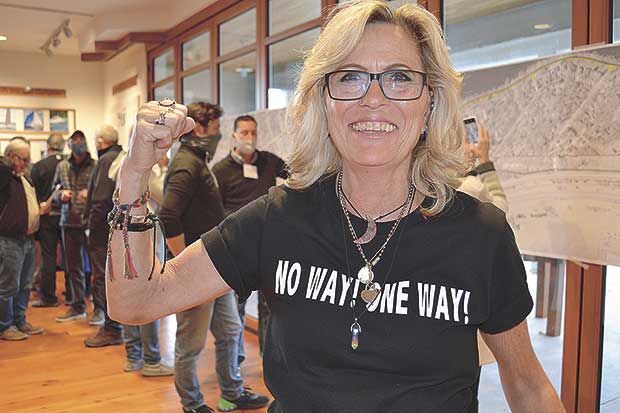 Township resident Tami Weller had this shirt made to show her opposition to the proposed trail alignment and one-way section from Park to Taylor Avenue. She described the trail plan as “invasive.” 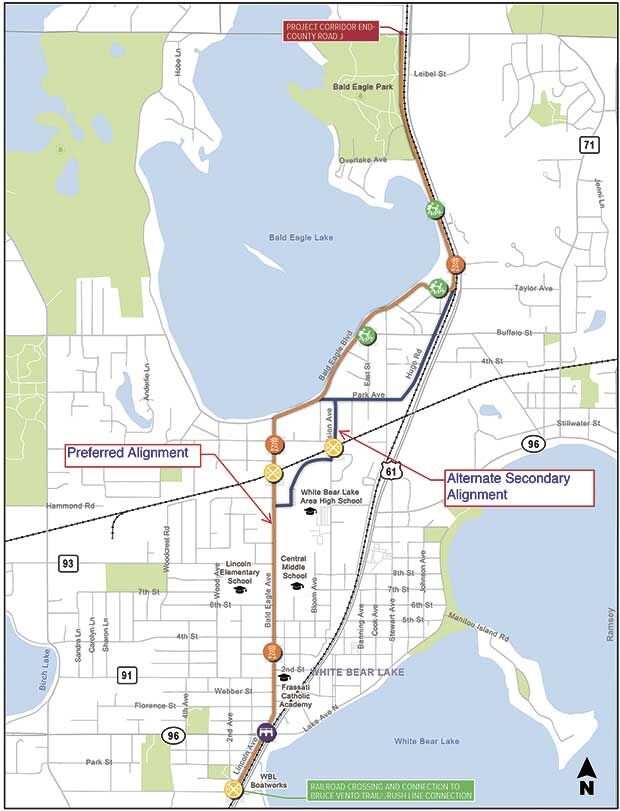 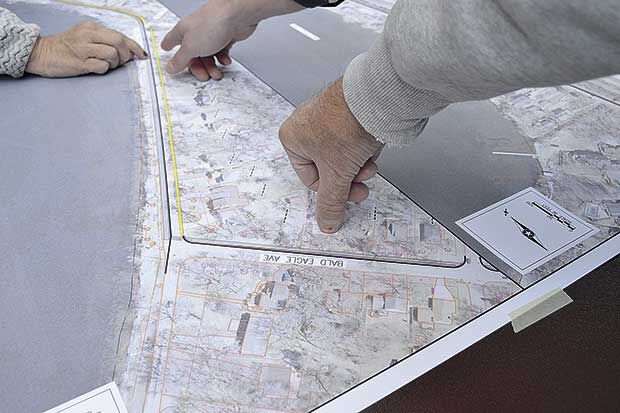 Doug Dorschner, in the gray hoodie, studies the latest trail map with his Bald Eagle neighbors at the open house. His thumb pinpoints where the trail runs next to his house.

Doug Dorschner, in the gray hoodie, studies the latest trail map with his Bald Eagle neighbors at the open house.

Township resident Tami Weller had this shirt made to show her opposition to the proposed trail alignment and one-way section from Park to Taylor Avenue. She described the trail plan as “invasive.”

Doug Dorschner, in the gray hoodie, studies the latest trail map with his Bald Eagle neighbors at the open house. His thumb pinpoints where the trail runs next to his house.

WHITE BEAR LAKE — Privacy is something Doug and Dianne Dorschner will lose if the county sticks to its latest layout for the Bruce Vento Regional Trail extension.

The Bald Eagle Boulevard residents say the planned trail will be 10 feet from their bedroom window, the logic of which eludes Doug.

"They are encroaching on people's property along Bald Eagle Boulevard," he said. "There are better routes."

The Dorschners voiced their concerns at a well-attended open house recently hosted by county parks and recreation staff at Boatworks Commons. The couple, and many of their neighbors, wondered how and when the route changed.

According to the county website, the preferred alignment corridor for the final phase of the trail project was selected in early 2020 as a result of public engagement starting September 2018 to 2020 with predesign starting January 2021. A draft amendment was approved by the Board of Commissioners in May and submitted to the Metropolitan Council.

That's news to Tim David, a Bald Eagle resident who doesn't recall any county meeting after 2019 regarding the new route.

"I don't know why the route changed," he said. "There are extreme design issues here. The width of the road, steepness of banks along the lake and 30-foot right of way are just a few. Are they going to condemn property? Most of my neighbors oppose it."

David, who is also leading the anti-Rush Line Coalition opposed to the bus rapid transit project and its disruption to the Bruce Vento Trail going to St. Paul, queried Scott Yonke at the open house, demanding to know when and why the plan changed.

Yonke is Ramsey County's parks and recreation director of planning and development.

"Last time I went to a meeting, it was Long Avenue to Eagle Street to Hugo Road," David told the project leader. "I'm not sure how this came to be."

Yonke replied that a 2019 meeting narrowed the extension down to three routes, including the latest rendition. "One cut through the school and up to Hugo Road; another tried to get over to Long Avenue. An outcome of that meeting was this was the preferred route," he said.

David asked who made that decision, but didn't get what he considered a satisfactory answer. "I don't remember being notified that I would be significantly impacted by this route until today," he told Yonke.

The 55-year resident of Bald Eagle Boulevard believes Long Avenue is a better option. The county road is parallel to railroad tracks, and has a wide and underused right of way.

Concurring was Beth Artner, another longtime Bald Eagle homeowner who said the original route makes more sense. "We can get pollinators along that corridor, and it won't inconvenience a lot of people," she observed.

Artner sent out about 100 invitations to homeowners affected by the route, encouraging them to attend the open house. "Real people are being impacted by these decisions, and it seems like government or entities responsible for these projects really don't appreciate or want citizen involvement," she maintained.

She was "heartened" to see the turnout at the open house and how people were engaged in the process, Artner said. "People on the opposite side of the issue talked to me and even though we didn't initially agree, I appreciated that we talked and came to an understanding and agreed to work together."

The Phase 2 extension is the last section of trail. Planners have been working on a design since 2018 to refine alternative corridors out of the rail right of way. The master plan for the 13.3-mile trail from St. Paul to the county boundary in White Bear Township was completed in 1993.

Another issue is converting a portion of Bald Eagle Boulevard to a one-way from Park Avenue to Taylor Avenue. If a two-way with trail is preferred, it could mean impacts such as acquiring more road right of way to fit a trail. If converted, one-way traffic would travel northbound.

Several residents at the open house said the late congressman, recognized for efforts to clean up the environment, wouldn't approve of the green space removed for a concrete corridor carrying Rush Line buses. "I felt Bruce Vento was a champion for green space," Dianne Dorschner said. "Now, it's like how much green space can we take away to put in hardscape? I don't think that was his legacy. His legacy involved the outdoors. This trail will be closing the outdoors to us in front of our home."

Yonke told the Press that the route is a "concept we're bringing forward to see what people think. It can be changed. These are schematics. We are trying to get feedback, what people like and don't like. The design is not set. It's very early in the design stage."

The county hopes to have the predesign completed by end of 2021.