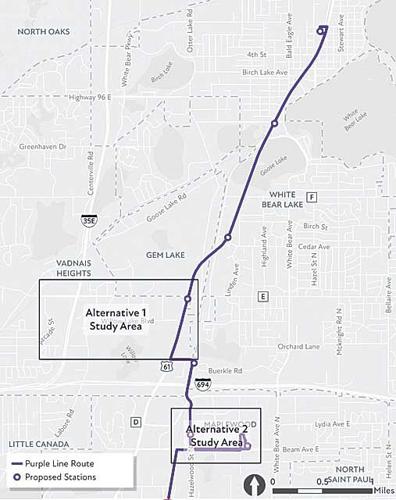 WHITE BEAR LAKE — A member of the corridor management committee for the Metro Purple Line said he was “pleasantly surprised” by the reception of the group at its first meeting last month.

Council Member Bill Walsh is representing the city on the 12-member committee, formed as an advisory body to Purple Line leaders at the Metropolitan Council and Ramsey County. Votes may be taken but are not binding on either the council or county.

City leaders raised concerns over the number of weekday bus trips per day (89) and the size of the buses (60 feet). There were also concerns over the disruption of station and dedicated lane infrastructure on existing roadways and adjacent businesses.

• Truncate the BRT line at Maplewood Mall Transit Center and add a connector between the mall and downtown White Bear. Connector buses would likely be 40 feet or shorter and electric.

The alternatives would still connect the northeast metro to the Metro Transit system and remain consistent with the project’s purpose and need, Lemothe noted.

Other significant changes presented at the meeting:

• There would be no station platforms or business access and transit lanes.

• There would be no reconstruction of Highway 61 at Whitaker Street.

• There would also be no associated Bruce Vento Regional Trail extension improvements.

Walsh said the Met Council also voiced concern that a lack of cooperation from a project partner, if the line was brought downtown as planned, would be “awkward” and would likely increase costs due to delays.

The project would still be eligible for federal transportation funding.

According to Walsh, the next action item will occur at meeting No. 2 in June — a vote to suspend the locally preferred alternative route. “It looks like they’ll do that,” he said. “It gives a green light to start planning new options to the route.”

Walsh gave a brief update to City Council members at their May 10 meeting. He said he feels like the Met Council is “listening.”

Mayor Dan Louismet agreed. “Before we speculate too much on who, what and when, I’m encouraged that Met Council is responsive to us. They’re listening to a community that says they don’t want it. I look forward to continuing to work with the Met Council to amend (the line) in a way that makes us happy.”

The current timeline shows Purple Line construction to begin in 2024.