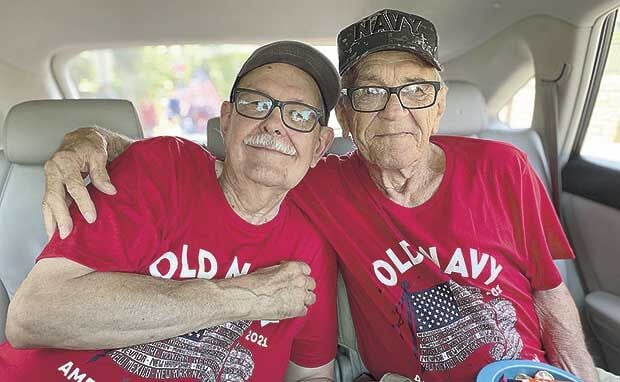 Kenny Jary and Jerry Cooper on their way to the Lake Elmo Fourth of July parade. 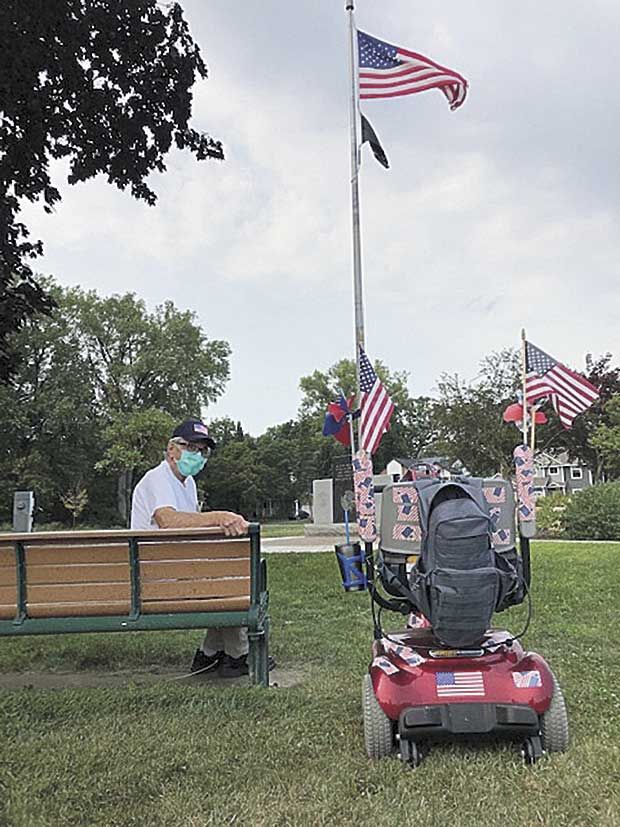 Jary is a Navy veteran who proudly decorated his scooter in red, white and blue. He enjoys sitting on the bench at Veterans Park in Mahtomedi to “think, pray and meditate.”

Kenny Jary and Jerry Cooper on their way to the Lake Elmo Fourth of July parade.

Jary is a Navy veteran who proudly decorated his scooter in red, white and blue. He enjoys sitting on the bench at Veterans Park in Mahtomedi to “think, pray and meditate.”

Who says you can't teach an old sea-dog new tricks? Or at least a second language?

When two teachers for the deaf met Kenny Jary at a Mahtomedi coffee shop, they immediately hit it off. The Willernie Navy veteran is a true-blue social butterfly. He simply loves to chat. It doesn't matter if he's talking to old friends or people he's just met.

In this case, it was Amanda Kline and Jenny Cooper, both  teachers who work at the Metro Deaf School in St. Paul. When Kenny discovered Cooper's dad Jerry was his age and deaf, he wanted to meet him. He also requested the women's assistance learning sign language. The two men have become good buddies, communicating through signing and writing, although it's hard to argue politics when you're not fluent.

The pair attend church suppers at St. Andrew's and meet for coffee or go to lunch.

Jary's teachers, Kline and Cooper, found his eagerness to sign so enduring, they made a TikTok video. Jary's handle is @patriotickenny.

The patriot part is a nod to Jary's military service. If you've seen his red, white and blue electric scooter, it's a giveaway that this is a proud veteran. Jary explains that he got the scooter because he has chronic obstructive pulmonary disease, or COPD. The scooter gives him the freedom to travel, mostly to his two favorite places: The Wild Bean coffee shop in Mahtomedi and Veterans Park across the street.

Jary, 79, likes to sit on the park bench and pray for those members of the military who went before him. "I go to the park and think about all my lost brothers," he mused. "Then I think about all the hatred in this world. It makes me very emotional."

From 1959 to 1963, Jary served aboard the USS Okinawa out of Norfolk, Virginia. It was a helicopter carrier, he said, that went to the Caribbean during the Cuban missile crisis.

Retired from the St. Paul Ford plant after 33 years, Jary moved to Willernie in 2009. A widower, he has three children, three grandchildren and one great-grandchild.

When you don't see him in Mahtomedi, the have-scooter-will-travel veteran can often be found at the Ft. Snelling National Cemetery to watch the flag raising or the Veterans Administration cafeteria. "I go there to talk to people. It makes me happy," Jary said. "And they have a good breakfast."

Jary is a popular guy at the Mahtomedi coffee shop, Kline said. "Everyone who knows Kenny loves him. Their lives are touched by him. He's priceless."