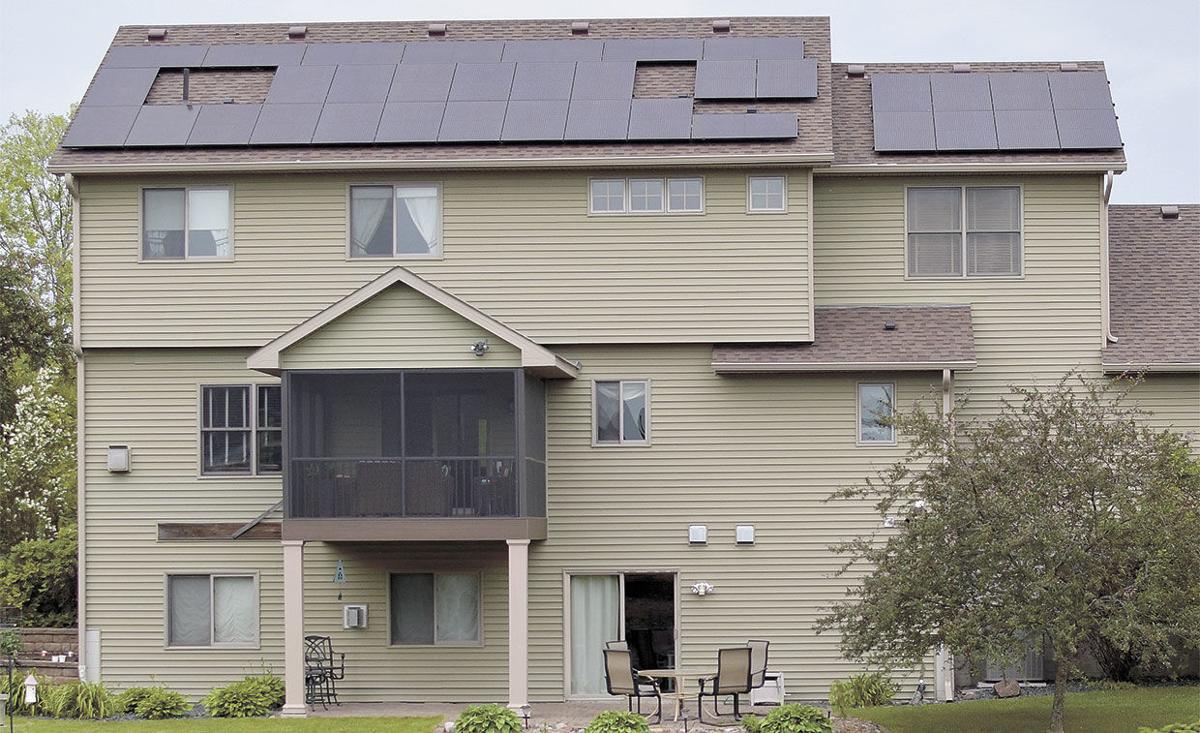 An array of solar panels are visible from the back of a home in Lino Lakes. 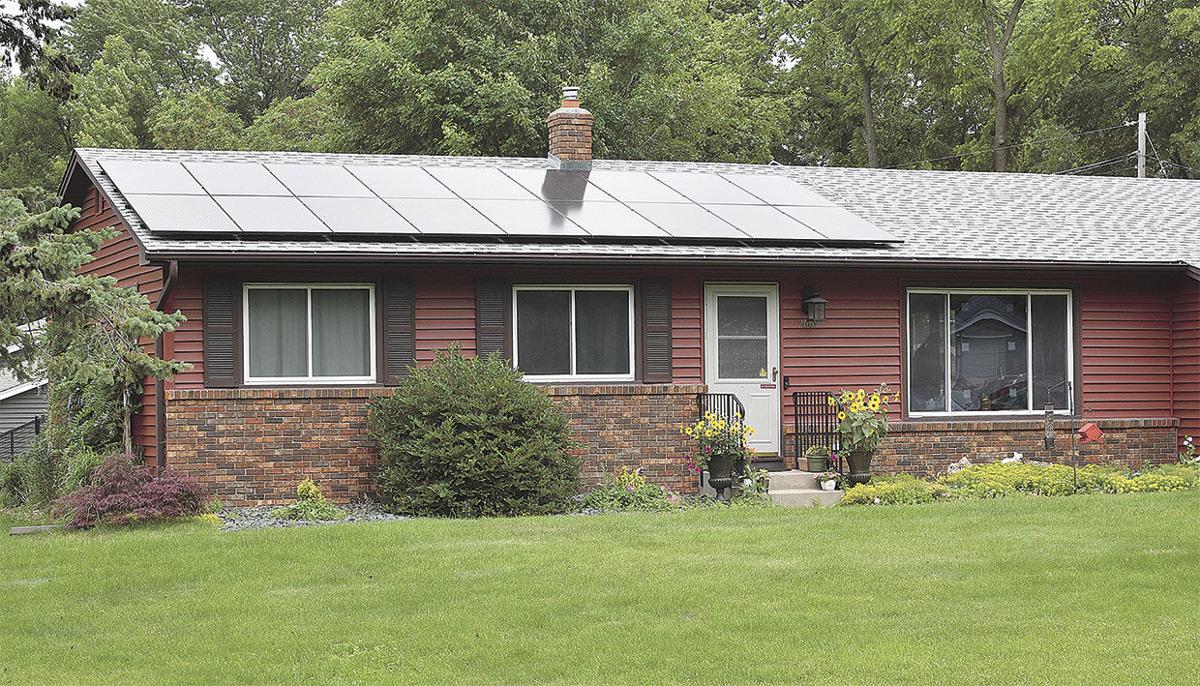 An array of recently installed solar panels gather energy on the roof of a home on the south side of White Bear Lake.

An array of solar panels recently installed by All Energy Solar gather energy on the roof of a home in Lino Lakes.

An array of solar panels are visible from the back of a home in Lino Lakes.

An array of recently installed solar panels gather energy on the roof of a home on the south side of White Bear Lake.

An array of solar panels recently installed by All Energy Solar gather energy on the roof of a home in Lino Lakes.

Solar energy has been around for a while, but the panels in our community sure haven’t.

Many residents are now switching to solar energy, and for good reason. In 2018, White Bear Lake held a solar energy information session where representatives from solar and energy organizations spoke about the benefits of solar. The event was purely informational, but those who attended had the opportunity to join other homeowners who wanted to work together to purchase solar and receive a group discount.

“From my experience, it’s an item that a lot of people have wanted to do for a long time,” said Bobby King of Solar United Neighbors, one of the organizations that participated in the session. “There’s interest in being more self-sufficient, and also leaving a smaller carbon footprint.”

But the information session wasn’t the only thing that has pushed people to switch to using solar power in recent years. Right now, it’s cheaper to install solar power: After 2020, the federal solar tax credit for doing so will decrease from 26% of the system’s cost to 22%.

“The incentives that the state of Minnesota and the federal government are offering are decreasing and going away. Those incentives are on a first-come, first-served basis. We’re encouraging people to take advantage of them because they’re available,” said Michael Allen, owner of All Energy Solar, a St. Paul family-owned company celebrating its 10th year in business.

“Our current version of electricity is burning gas or coal that omits harmful gases into our environment. That same electricity can be done with zero emissions,” he said.

Two homeowners, one in Lino Lakes and one in White Bear Lake, recently made the switch with All Energy Solar and gave glowing reviews.

“It’s just something I grew up with, that sort of intrinsic value of lowering our carbon footprint,” said White Bear Lake resident Kyle Manley.

Jennifer Rooney echoed that view. Rooney, a Lino Lakes resident, has children and wanted to reduce her own carbon emissions for the future.

Although the two homeowners love their product, Allen believes that there are a lot of myths about solar energy that discourage people from investigating it as an option.

Myth No. 1: Solar is too expensive.

According to Allen, in the majority of cases solar is less expensive than buying from the electric company. It provides a lot of value to a homeowner. Rooney was told that the panels would add 4% to her home value.

“Electricity prices are continuing to rise, and if you want to stop renting your electricity and start owning it, now is the time to do that,” Allen said.

“Depending on your electric bill and suitability of your roof, solar will pay for itself in about 10 years. Solar panels are guaranteed for 25 years, and they’ll likely last more than 25 years,” he said.

Both Manley and Rooney agreed that solar was no more expensive than electricity.

Both homeowners secured loans to pay for their panels. Rooney obtained a 12-year loan for her panels, while Manley’s will be paid off in eight years.

“I would say once the panels are paid off that it’s going to be cheaper. Our monthly loan (payment) is going to be about what our electricity bill was, and then when it’s done we’ll just be making money,” Manley said.

“We opted to put additional panels on because the electric company has to pay us back at the end of the year (for energy) that we don’t use,” she said. “If I had opted not to put the additional panels, on we’d be paying $11 more than our usual bill.”

According to both homeowners, all the extra power that their panels generate goes back into the grid to power places around them. This means that their energy company is obligated to pay them back for the extra energy they generate.

“Right now, I’ve got a monthly payment that’s like $100 a month for eight years,” Manley said.

Neither Manley nor Rooney have to pay an electric bill; they’re just paying off their loans. Once the loans are paid off, they may even be pulling in some money from their panels.

Rooney found the savings to be huge, as well.

“The numbers were just astounding. If we did nothing, our cost of electricity would be $60,509 over 25 years,” she said, noting that those numbers also accounted for inflation.

Not only was it affordable, but cost have gone down since solar panels were first popularized.

Myth No. 2: Solar panels are ugly

Solar panel designs have changed quite a bit since they were first developed. Not only are they stronger and often last longer than they did years ago, but they’re also able to fit onto a roof fairly well.

“When you walk my neighborhood, they look beautiful,” Rooney said. “They’re flat against the roof. They don’t stick up.”

Depending on the roof, solar panels are now able to sit right on the roof. They don’t necessarily have silver edges, which means that all you see is the shiny black color.

“You can design a project that complements the design of your home,” Allen said.

Solar panels in the past weren’t as strong as they are today, but times and technology have changed.

Both Rooney and Manley agreed that the solar panels produced more than enough energy for them.

In the summer months, “I can basically cover my basic needs in 10-12 days a month,” Rooney said.

Both Rooney and Manley went through All Energy Solar to get their panels.

“They come out and do a survey of your house. They are very communicative. The whole install process took three days. It was little bit loud, but it was very seamless and hands-off, which is what I love,” Rooney said.

The process took even less time for Manley.

“The solar install itself only took one day. They cut the power for 30 minutes so Xcel (Energy) could stop in and install their meter. In terms of the transition, it was really pretty simple,” Manley said.

Rooney mentioned that the group was very transparent with her. They checked out the roof, how mounting would work and how much sun the yard receives, as well as angles.

“If you had too much shade in your yard they’re going to say it’s not going to work out for you,” she said.

Both Rooney and Manley had similar reasons for switching. It wasn’t just because of the reduced cost, but also for the environmental impact. According to Rooney, her solar panels had a significant effect: Following installation, 169.7 metric tons of CO2 will not be emitted into the atmosphere, roughly the equivalent of the elimination of 36 passenger vehicles or the growth of 2,805 tree seedlings.

“I really have a hard time coming up with drawbacks,” Manley said.

Not only does this allow people to live lifestyles that reduce their carbon footprint, but it also helps them to become more self-reliant.

“It provides a lot of independence for a lot of people, and people really appreciate that, especially in a time like right not where there’s a lot of fragility,” Allen said.

Both homeowners encouraged residents who are interested to look into solar options and see if the switch is right for them.

Rooney noted that some solar panels can be put up now and more can be added later, five or 10 years down the line.