There are two main entrances: This one is on the west side, also the side for bus loading. 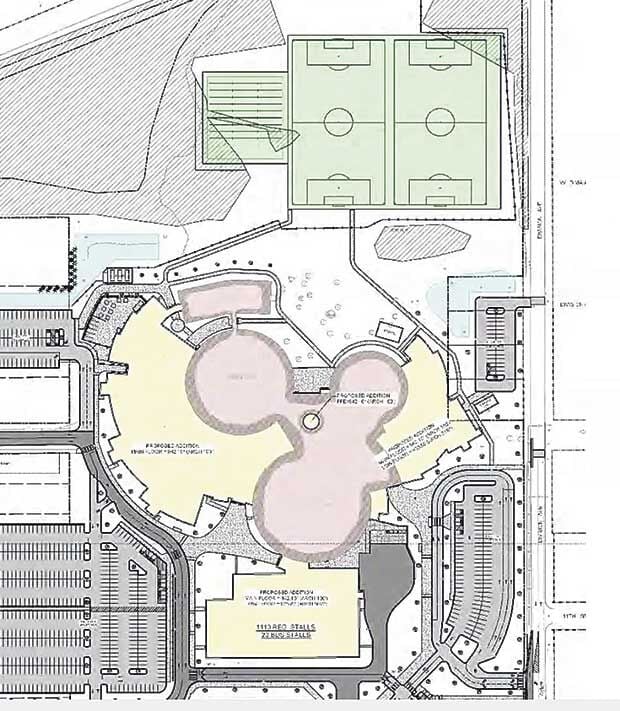 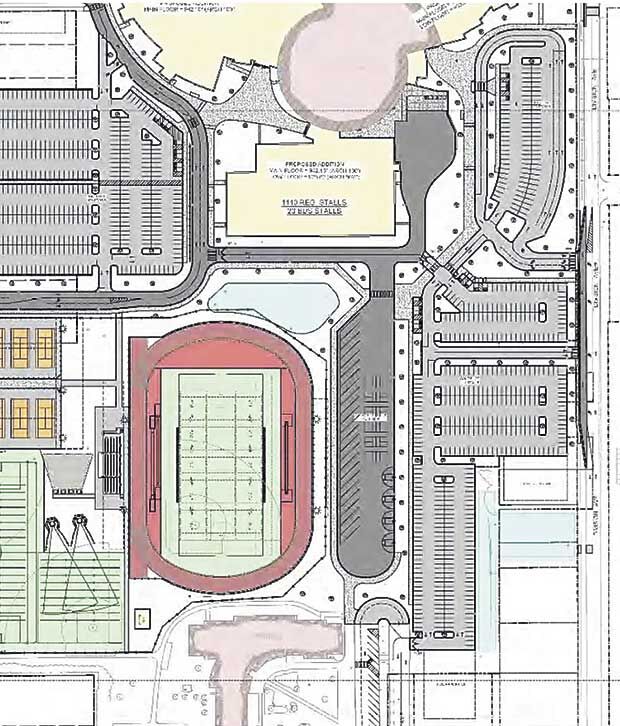 A centrally located 1,500-seat stadium for track and field/soccer will have a new athletic track surface and lighting for evening events. Athletic fields to the north along Division Avenue currently prone to soggy grass will have synthetic turf raised over a sand base for filtration.

There are two main entrances: This one is on the west side, also the side for bus loading.

A centrally located 1,500-seat stadium for track and field/soccer will have a new athletic track surface and lighting for evening events. Athletic fields to the north along Division Avenue currently prone to soggy grass will have synthetic turf raised over a sand base for filtration.

WHITE BEAR LAKE — The new school will double in size. There will be two main entrances instead of one, a larger auditorium, new field house, three stories of classrooms and multiple parking lots. All are part of the North Campus expansion/renovation approved by voters in 2019.

The name will change, of course, to White Bear Lake Area High School. North and South Campus will cease to exist as separate schools as grades 9 through 12 are once again housed under one roof with capacity for 3,200 students. Move-in date is targeted for fall 2024.

The Planning Commission saw district plans for the mega-expansion and all its amenities at its March 29 meeting, and forwarded two unanimous recommendations for approval to City Council.

First was the Environmental Assessment Worksheet (EAW) findings of fact and conclusions. Since the expansion project involves about 398,000 square feet of new institutional building space (the current footprint is 271,000), an assessment was required under state statute.

Community Development Director Anne Kane, noting this was her first EAW as a city employee, said staff agreed with SEH Inc. consulting engineers that the project will not have significant environmental effects and therefore does not require further study through an Environmental Impact Statement.

A second resolution recommends the district get a conditional use permit for the project.

In the staff memorandum, it was noted that the school district has purchased a number of adjacent residential properties which have, or will be, demolished to accommodate the expansion. In total, 22 houses have been purchased.

A handful of homes, five, are surrounded by the expansion. Kane told commissioners the district will seek to acquire those properties when they become available to accommodate future parking capacity. She reminded them that the school board won’t seek eminent domain.

There is no problem with zoning — the campus is zoned P for public — and code provides for automatic rezoning of acquired parcels, according to Kane.

The expansion will include three wings that will be one- and three-story additions. Other notable design changes include added student and faculty parking, student drop-off zones, location of a school bus loading/unloading zone — on the Bald Eagle Avenue side — and internal east-west sidewalks.

Athletic fields and courts at both North and Central Middle School will be constructed or reconfigured. The proposed facilities will accommodate physical education classes and team sports such as football, soccer, lacrosse, tennis and track and field, but varsity football will remain at the 4,500-seat South Campus stadium. There were concerns about varsity games played at a new stadium, Kane said.

The project will include extensive renovation throughout the existing building that will result in 123 individual classrooms clustered into learning studios, laboratories and workshops designed to accommodate flexible learning. Integrated into the heart of the school will be a new sunlit Student Union, which will serve as a place for students to congregate, complete with coffee shop and cafeteria.

Kane pointed out off-site improvements that help alleviate traffic congestion around the school.

“The project is not without some challenges and impact to surrounding neighborhoods,” she said. Parties have met on numerous occasions to identify issues and explore options to mitigate negative impact of the campus, Kane maintained.

Some elements are still being evaluated but some off-site improvements identified to lessen the impact are a traffic signal at Highway 61 and Eighth Street, a sidewalk along Eighth Street between 61 and the campus, dedicated turn lanes at entrances on both Division and Bald Eagle Avenues and pedestrian/bicycle extension north of the campus.

The final alignment of the Bruce Vento Trail will play a large role in the timing, design and configuration of those extensions, she noted. Kane added that “securing land use entitlements for the campus will serve as a catalyst” for nearby projects like the regional trail and Rush Line transit corridor.

There was much more discussed at the meeting regarding parking (there are 1,130 proposed spaces), signage, landscaping and exterior lighting, and future electric vehicle charging stations. These topics will get more review, as well as opportunity for community input, as the project proceeds.

Commission Chair Ken Baltzer thanked Kane for the “excellent” presentation, commenting it was probably the longest one he’s heard. Members had only a few questions on zoning and athletic fields before opening the Zoom meeting to a short public hearing.

A neighbor asked if the district will buy more houses on the west side? The district’s assistant superintendent for finance and operations, Tim Wald, replied, “it’s unlikely.” Another neighbor pointed out the increased school bus traffic on the west side of the school “will be a significant change for us who live on Bald Eagle Avenue.”

Kane made it clear during her presentation that no one side will bear a greater amount of traffic. “The design team was able to take advantage of a two-sided campus,” she said, “by locating parking, bus access and parent drop-off at different entrances.”