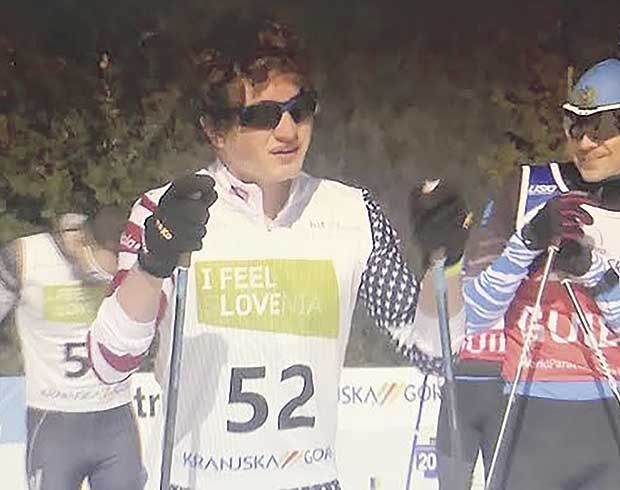 Max Nelson was the youngest and only visually impaired member of Team USA ParaOlympics this winter. 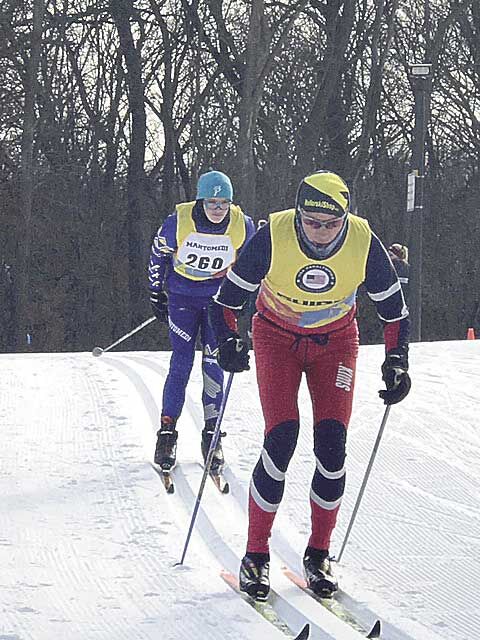 Coach Dave Bridges guides Max Nelson using a headset and speaker to relay instructions. Bridges was the first of many guides who have helped Max through the years.

Max Nelson was the youngest and only visually impaired member of Team USA ParaOlympics this winter.

Coach Dave Bridges guides Max Nelson using a headset and speaker to relay instructions. Bridges was the first of many guides who have helped Max through the years.

How can an athlete who’s nearly blind participate in three high school sports and become a conference champion in one of them?

Nelson recently completed the Nordic Ski season as the No. 1 individual in the Metro East Conference. He missed sectionals to ski in Europe with Team USA ParaOlympics. He’s also in cross-country and track at Mahtomedi High School.

“Max is an incredible athlete, with one of best work ethics ever seen,” said Brianna McIntyre, Zephyr coach. “He is incredibly helpful to the other kids. Even though he can’t see very well, he’s always asking if he can help with things.”

Nelson is blind in his left eye and almost blind in his right. In full daylight, he can see bright colors and general shapes. But with the help of a guide, he’s been in Nordic skiing since age 7.

“It’s my life. I love skiing. It also relieves stress from school,” said Nelson, adding that he will likely make it a lifetime activity. “My teammates, my family and my coaches are very supportive.”

Nelson is “guided” by a skier in front of him wearing a headset to shout instructions to Max. The instructions are blared at him from a boombox-like speaker mounted on the guide’s back. The guide imparts critical information such as what inclines or turns are coming up, what technique to use, which direction to veer off, and fallen branches to avoid.

When Max was just starting out, Zephyr coach Dave Bridges served as guide, but when Max got to be faster than his guide, Bridges and Max’s father, Jon, started recruiting guides from the ranks of college skiers and Birkebeiner veterans. About nine different guys have donated their time to help a brother skier because they’re impressed by Max’s grit and determination, Jon Nelson said.

The 5-foot-7, 135-pound athlete was conference champion this year, winning every race except one third-place finish. He joined the Zephyrs in seventh grade and has lettered ever since.

Last year, he placed 13th in the conference, missing much of the season due to eye surgery. His teammates made him a blanket that everyone signed, helping him cope, his mom said.

His parents, Jon and Sharon, have always admonished Max to not define himself by his lack of vision. “In our household, we concentrate on what we can do, not what we can’t,” Sharon said. “Discouragement is not an option.”

“He knows due to his eyesight he will have some challenges in his life,” Sharon said. “But with Maxy’s determination and grit, he will succeed. He has adapted so well.”

Nelson decided early on to pursue skiing and running — individual sports — for all he was worth, Jon said. His dad noted that in large part, this was because he didn’t get asked to play catch or shoot hoops with other kids, and sports were going to be his ticket to making friends and socializing.

Longtime head coach Bridges (an assistant this year) has been a big help, Sharon said, along with a number of people who have advocated in his behalf and coached him.

Her son wants to be seen as any other teenager with no special treatment, Sharon said. “He is a hardworking, funny and kind kid who also happens to be very athletic. His passion for sports has helped him overcome a lot of his challenges.”

Nelson spent 12 days in Slovenia at the Skirenia World Cup, consisting of three races. He made the national team after an invitational in Bozeman, Montana, where he impressed coaches with how he handled himself.

Team USA had 20 members, mostly sit skiers and stand skiers, in their 20’s and 30’s. Max was the youngest and the only visually impaired member of Team USA. Other teams had visually impaired skiers, providing Max with his first opportunity to race against them.

The competition was more intense and the courses more difficult than he’s accustomed to. But he had fun. On his first birthday away from home, the team gave him a party with cake and candy. And wearing a USA race suit and representing his country “was really special for him,” Jon said.

Max is also in cross-country (“’mainly for the training”) and in track as a sprinter. His father happens to be the Zephyrs sprints coach. They also do weight training together at a fitness club.

Track season is coming up. Sprinting might seem simpler, just running straight ahead, but there are a number of challenges, said his father. Max needs the lane lines to be clearly painted. Evening meets are difficult. He needs guides to assist him around each corner. It helps that meet judges usually let him run in lane one, where the track borders the green turn.

It’s critical for him to stay in his lane and for opponents to do the same. “The dangerous part is,” Jon said, “if another athlete steps out of his lane and enters Max’s, they don’t realize that Max is unable to see him.”

One of four kids, Max has a twin brother, Johnny, who also skis but not competitively.

Nelson was almost 3 when he had his first retinal detachment, in his right eye, identified during an eye exam. He had surgery the following Monday.

“The doctors were shocked to see Maxy’s condition, for detached retinas are very uncommon in children,” Sharon said. “During the surgery, Dr. Ryan found his right eye was completely detached, but his left eye was detaching as well. He really wasn’t seeing well.”

His parents were taken completely by surprise; the little boy was always running around with his brother, with no apparent problem.

Max went through about 10 surgeries because the retina kept detaching. They could save his right eye with limited vision, but he has no vision in his left eye. His doctors are Dr. Edwin Ryan at Vitreo Retinal Surgery and Dr. Todd Watanabe at St. Paul Eye Clinic.

Nelson got started in Nordic at age 7 in Endurance United, an organization that promotes healthy living through outdoor sports for kids even if they need adaptations an extra help. He is still a member.

Academically, Nelson mainstreams and does well; he had a 3.5 GPA last semester. He uses an iPad/computer screen to follow the content of the Smart Board with his class. He has textbooks read aloud to him, and he has schoolwork enlarged to see what he can.

“Maxy is using God’s gifts to inspire others, especially with visually impairments, that they can do it, too,” his mother said. “Don’t let whatever your impairment is stop you from your passions.”