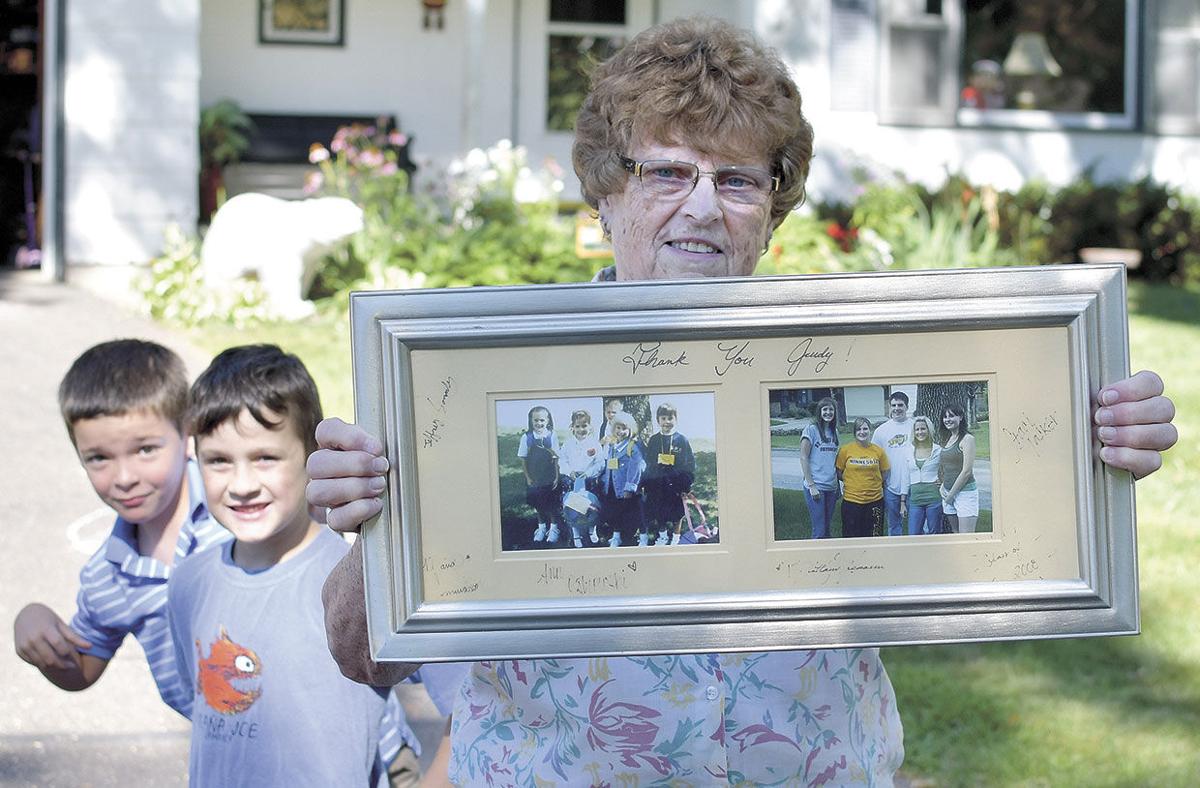 Judy Pilz diplays signed framed photos given to her by children she cared for, on their first day of school and at a graduation open house. 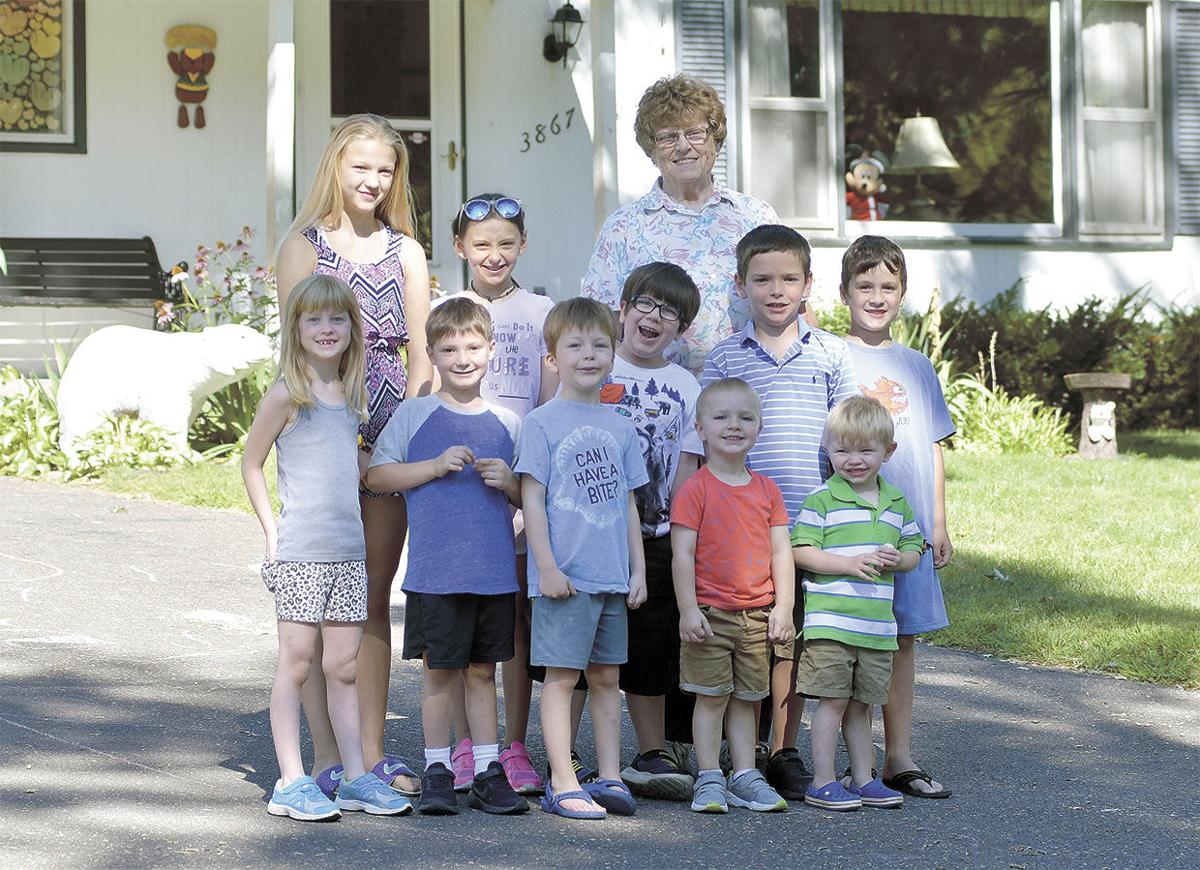 A group of children gathers around Judy Pilz in front of her White Bear Lake home.

Judy Pilz diplays signed framed photos given to her by children she cared for, on their first day of school and at a graduation open house.

A group of children gathers around Judy Pilz in front of her White Bear Lake home.

We all have a different idea of what a hero or good Samaritan looks like.

We envision police officers, firefighters, volunteers, doctors and more, but we often forget some of the people in our community who play an integral part in keeping everything running. Without them, we wouldn’t be able to accomplish the things we do as a whole.

One of those people is Judy Pilz.

Pilz turns 79 years old Sept. 16. In 2022 she will receive her 45-year award from the National Day Care Association for being a licensed day care for that entire time. But her day care experience began even before she was licensed.

“I’ve been doing day care since my daughter was born, and she’s going to be 49,” Pilz said.

Taking care of that many children in our community has led her to raise and meld many young minds to become respectable adults, and she has also had a great impact on their parents.

“It’s people like Judy who are the pillars of our community,” said Rebecca Blaesing-Bauer, whose children attended Pilz’s child care while they were growing up. “Judy helped me out in a horrible spot. She created a second home for my kids.”

Pilz said that parents often told her that they worried more when their children went to visit with friends or attended school than when they were under her care.

“My children are all biracial, and Judy has biracial grandchildren. Going to her home was a very safe and welcoming place for my kids,” Blaesing-Bauer said.

Pilz continues to run her day care for a simple reason: because she loves children. When talking about her work, she often affectionately refers to them as “my kids” and their guardians as “my parents.”

She also looks for respect and manners as she teaches the children to say please when they ask for something, thank others and say “You’re welcome,” when thanked.

Pilz is described as timeless, genuine and able to make you feel like she is just talking to you.

“I asked my son, Caleb, what he thought was noteworthy about Judy: (he said) she always encourages you to do and be better,” Blaesing-Bauer said.

She also noted that Pilz never closed. Pilz never took a day off or took a sick day in all the time Blaesing-Bauer brought her kids there that she can recall.

Judy estimates she has taken care of 100 to 150 children during her time. She has had five second-generations of kids in her day care. And for more than 40 years now, a White Bear Lake School District bus has stopped at Judy’s house.

“That’s amazing to me — all that history. It’s not about a business at that point, it’s about building a community,” Blaesing-Bauer said.

Pilz enjoys children and seeing how they grow into young adults. She is also great at maintaining relationships with the kids who have been in her care and their parents. When the children grow up and no longer need to be in her care, it is hard for her to watch them go.

“I’ve had people say ‘Now, you’re not going to cry,’” she said. Then the kids give her a hug goodbye, and, in her words, she starts bawling.

But the relationship doesn’t end there.

“After my kids left Judy’s day care, she is wonderful at maintaining a relationship,” Blaesing-Bauer said.

Pilz brings Blaesing-Bauer’s kids Green Bay Packers trading cards, as she is originally from the area, and an ornament every year for Christmas. She also talks with them at least once a year. “They adore her. It goes back to that connection, that’s a craft. For years my kids used to stop over at her house and check in.”

Some go to her house when they graduate high school to remake their first day of school photo by her bus stop. One family had all four kids remake a photo they took at her house and gifted it to Pilz at one of the open houses held for their child’s graduation. Pilz proudly hangs this treasure in her house for everyone to see.

She says she has gotten a lot of support from “her families.”

Now people often ask her when she is going to retire.

“I always say I’m not ready,” Pilz said. She thinks she would be bored without the structure and fun the children bring into her life.

So, for now anyway, Pilz will continue to do what she does best: taking care of “her children.”