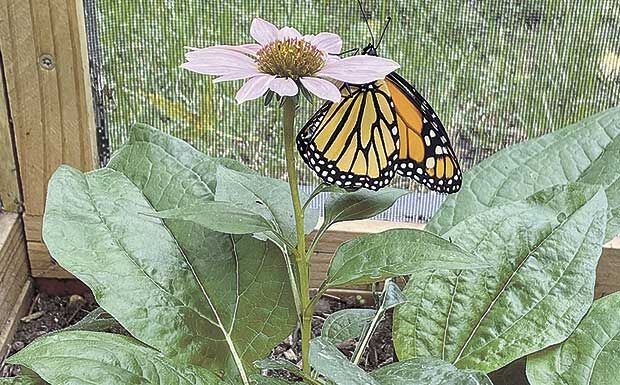 Monarchs are the state butterfly. 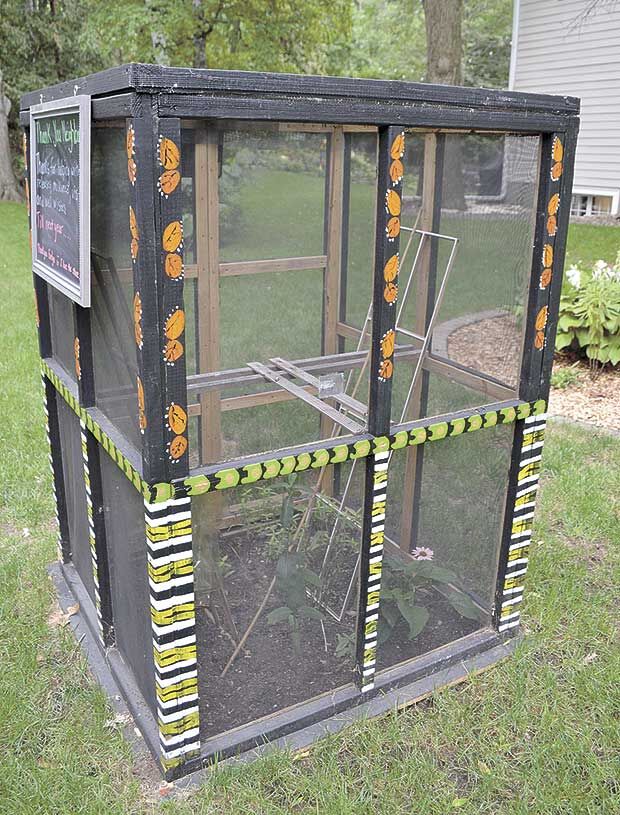 This 3.5-by-5-foot screened enclosure serves as a butterfly house in the Drews’ yard. The structure was painted to show three stages in a monarch’s life: caterpillar, chrysalis and adult. 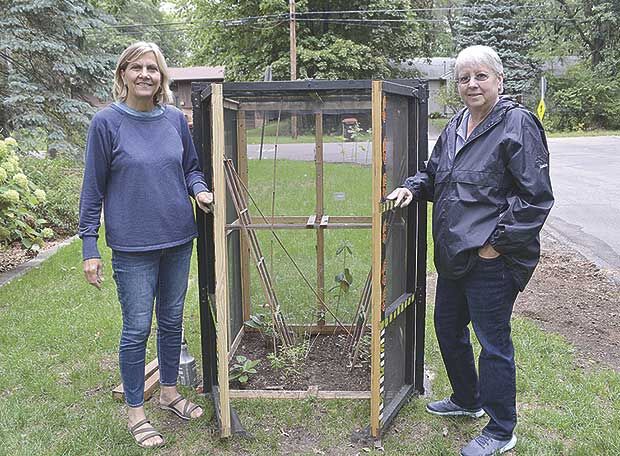 Rachael Drew of Birchwood, left, and her friend Sue Katzenberger, White Bear Lake, display the butterfly house in Drew’s yard. Both women nurture monarchs as they morph from tiny eggs to adult butterflies. 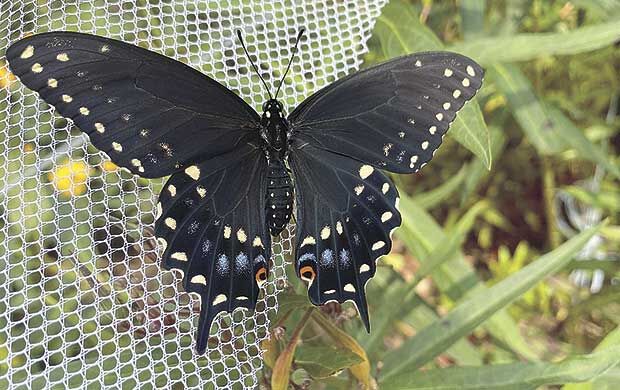 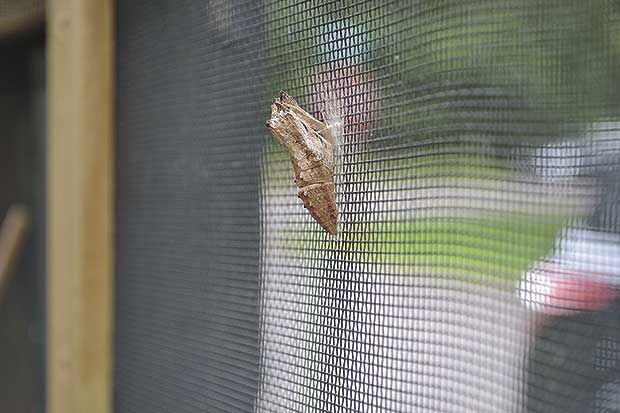 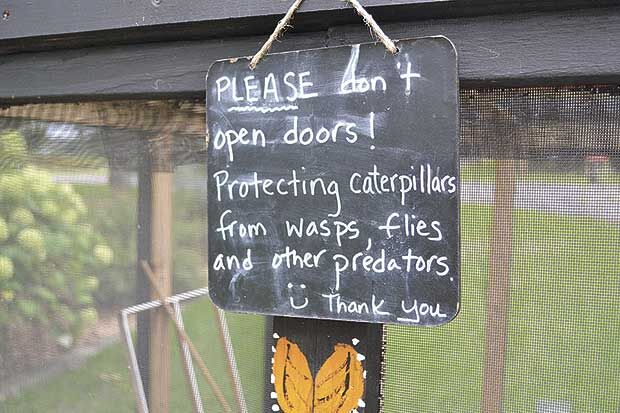 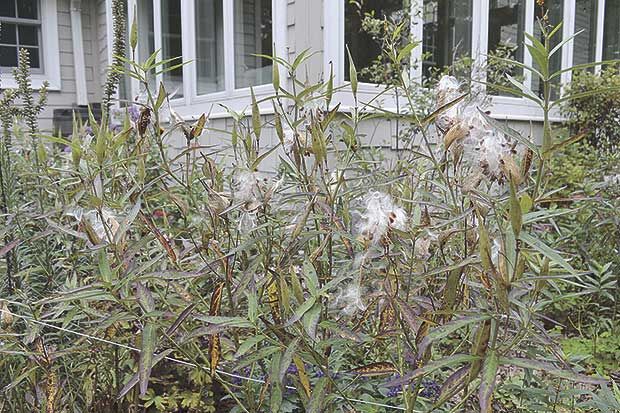 Monarchs are the state butterfly.

This 3.5-by-5-foot screened enclosure serves as a butterfly house in the Drews’ yard. The structure was painted to show three stages in a monarch’s life: caterpillar, chrysalis and adult.

Rachael Drew of Birchwood, left, and her friend Sue Katzenberger, White Bear Lake, display the butterfly house in Drew’s yard. Both women nurture monarchs as they morph from tiny eggs to adult butterflies.

The Birchwood butterfly house is a hit with the neighbors.

"People out walking always stop for updates on the activity," said Rachael Drew, the resident behind the monarch nursery in her yard.

"It's been a great way to meet neighbors. None of this was intentional when we put it up May 2020. It's an accidental silver lining during the pandemic," Drew added.

The hatch is done for the season, and the last of the monarchs were recently released. Drew still has a few pupae, or chrysalis, in her house but the outdoor enclosure is now empty of the state butterfly. She figures about 70 monarchs survived, thanks to the screened cage.

"Mortality rate is high for monarchs," according to Drew, who said one female butterfly can lay 700 eggs but only 5 to 10% of them survive to adulthood.

It takes just 28 to 32 days for a monarch to complete its four-stage life cycle, which goes from egg, to larvae, or caterpillar, to pupa, and then adult.

Drew's husband Dave built the screened house, which holds milkweed plants and other favorite flowers. Her backyard  butterfly garden is flush with both common and swamp milkweed to attract monarchs, the only plant on which the butterfly larvae live. She also grows heliotrope, zinnias and blazing stars for butterflies and dill specifically for swallowtails.

The enclosure has a chalkboard on one side to provide an update on how many butterflies were released on a given day, and another board to remind people not to open the case. Monarchs have many predators, including flies, which supplant a monarch's eggs with its own.

"The project turned into a wonderful experience," noted Drew, who has lived in Birchwood with her husband for 21 years, raising three adult children. "Our neighbors embraced it. It's something fun to share."

Drew has been raising monarchs about seven years, both indoors and out. She gets the eggs and caterpillars from the milkweed in her backyard and transfers them to the enclosure. Many people have habitat suitable for indoors that can be purchased online but Drew wanted something more natural. "I wanted them to be outside," she said.

On the plus side, neighbors are finding caterpillars or chrysalis in their gardens and bringing them to Drew. "They're also starting to recognize milkweed and to think about its important to monarchs," she added. "We had no idea people would be so interested. This turned into a wonderful neighborhood project."

Retired White Bear Lake ecologist and expert Bob Djupstrom said monarchs, native to North America, are at a critical phase in their survival. Populations have dropped from 900 million at one time to 57 million in 2014, he said. Pesticides and habitat loss are largely responsible for the dramatic decline. Monarchs feed only on milkweed, which is rapidly disappearing from farm fields and ditches. Six states, from Minnesota to Texas, are forming a monarch corridor along I-35 dedicated to the planting of milkweed, according to Djupstrom, to help the monarch in its annual migration to and from Mexico.