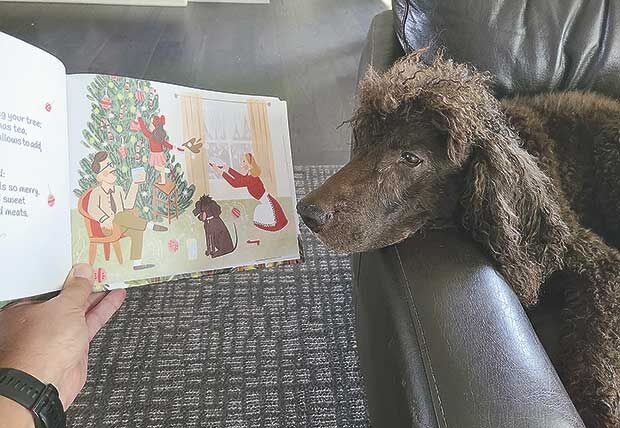 Danny Mishek showing his beloved dog Darby page 17 of “The Christmas Tree Story” where Darby is featured in the illustration. 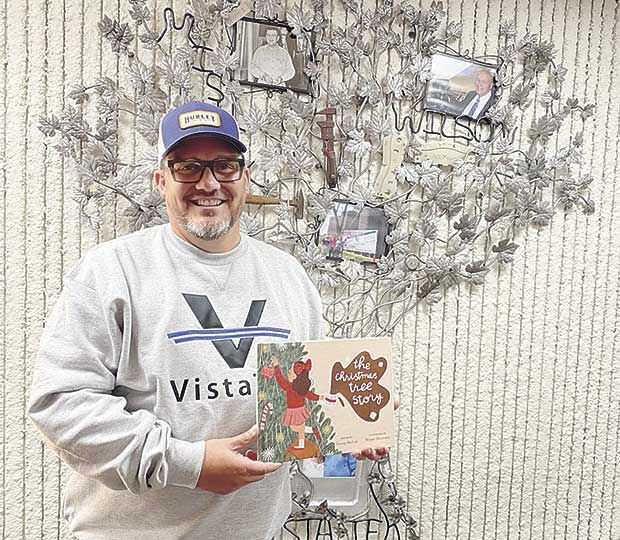 Danny Mishek showing his beloved dog Darby page 17 of “The Christmas Tree Story” where Darby is featured in the illustration.

Danny Mishek never thought about being an author, but he liked telling stories.

“I always liked telling stories and my dad told me I should start writing them down and write a book; but I’d rather tell stories the old-fashioned way — verbally,” Danny said.

Danny, of Little Canada, is the President of VistaTek in Stillwater, a family business formerly located in Vadnais Heights. He is now a published author with his first self-published book, “The Christmas Tree Story.” The children’s book is about the tradition of  decorating a Christmas tree and how a family creates a tree together and puts a fresh holiday canvas on the tree each year.

“Everyone has their own tradition of decorating their Christmas tree and they’re all different. My goal was to highlight the tradition without saying there’s a right or wrong way,” he said. “You’re unpacking your life and each each ornament becomes a memory. The kids like seeing ornaments that they’ve made or received throughout the years. I tried to capture that in this book — to show the importance of the family, tradition, sharing and caring.”

It all started with Danny’s 2021 New Year’s resolution to give up social media for 30 days, and he found himself having nervous energy and more free time. He went to Target, bought a few books and started reading.

“I gave up social media because of the division of the election, the world pandemic, and the social unrest in Minneapolis and I had to back away from all the darkness. I went to Target, bought a few books, and started reading,” he said.

It got him thinking about writing a children’s book. He started writing down ideas and eventually the book was complete. Danny’s wife, Amy, suggested he have someone edit the book, and Danny initially didn’t think he needed to. He ended up giving it to Roseville High School English teacher, Tess Ormseth, for editing and feedback.

“She sent me back three edited copies and I realized that I am a much better talker than a writer,” he laughed. “It also really made me appreciate high school English teachers.”

Originally, he was going to print 20 books to give to his immediate family as Christmas gifts. “I thought it would be something cool to give to my kids to know that they were an inspiration to me, as well as my wife, parents, grandparents, and siblings,” he said. But when he asked his business coach, Sarah Stern, to read the book and give her honest opinion, she told him to print more than 20 copies and share it with the world.

Danny met the the book’s illustrator, Megan Shumway, online and sent her some family photos as “inspiration” to incorporate into the book. “She did a great job capturing the detail of my writing through her illustrations and it truly means a lot to me,” he said.

Danny said when his children, son Colten and daughters Arabella, Monterey and Kalifornia, read the book, they told him they thought it was amazing. “When my son was half-way through reading the book he said to me, ‘Dad, I want to see the pre-edited version,’” Danny said.

Danny noted one reason he wrote “The Christmas Tree Story” was to honor his grandma Elva, who passed away five years ago. He also recalled a sad moment that happened along the journey.“Darby, my curly-haired brown dog, had to be put down on the same day the books were delivered on September 15. He got his wings and is immortalized in the book along with Grandma Elva,” he said.

People can buy the book locally at Avalon on Grand, Red Balloon Bookshop, Rose Floral, Tremblay’s Sweet Shop, Wagner Greenhouses & Garden Center, White Bear Yacht Club and all Kowalski's Market locations. Von Maur will also sell the book in all of their locations. They can also be purchased at Amazon, Barnes & Noble, Target and on Danny’s website at www.dannymishek.com.

“To write this was a tremendous experience. I thought the journey was about writing the story but now that I’m sharing the story, the journey has become so much more,” Danny said. “The journey now is about people who’ve said to me, ‘I got my book and I read it to my daughter and she wanted me to read it four more times before bedtime.’ It just melts my heart that a family is bonding by reading the book.”