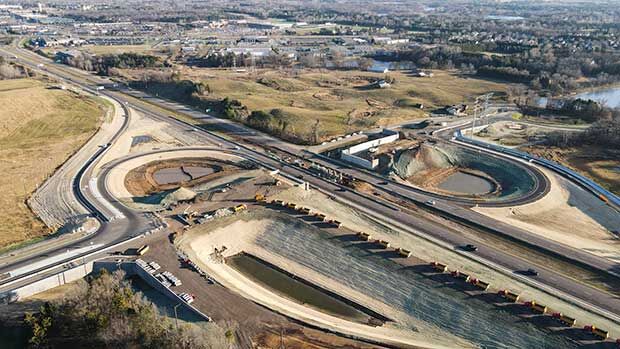 A photo shows the project’s progress at Manning Avenue and Highway 36.

A map shows the project’s planned improvement for Manning Avenue and Highway 36.

A photo shows the project’s progress at Manning Avenue and Highway 36.

A map shows the project’s planned improvement for Manning Avenue and Highway 36.

Improvements continue on the Highway 36 and Manning Avenue interchange now that road construction season has begun.

The estimated $32 million project began in the spring of 2021 to address increased traffic on Highway 36 and at the Manning Avenue intersection. A traffic study performed in 2017 and 2018 found that traffic is expected to increase at the intersection over the next 20 years. The project aims to improve safety by replacing the at-grade intersection with an interchange and removing a series of stoplights.

“There’s a safety component to removing the stoplights. You know people view stoplights as a safety feature, but they also have their own safety issues with them,” said Washington County Construction Engineer Gerritt Bangma.

After the St. Croix Crossing bridge opened, Highway 36 now operates more like an expressway, which isn’t conducive to the backups generated at a signalized intersection. To solve this issue, the project has focused on building an interchange with ramps and an overpass to help maintain the flow of traffic on Highway 36.

Last year, the bridge abutments and the bridge’s center pier were completed and the bridge beams were placed before Christmas. The project’s next major milestone will be placing the bridge deck itself, which will necessitate some temporary closures on Highway 36 this April.

A pipe will be installed to convey the stormwater collected in the ponds near the interchange. That pipe will be connected to a water reuse structure. Collected stormwater will be used to water the Applewood Hills golf course, located on the northwest corner of the interchange. The stormwater reuse portion of the project will be undertaken through a partnership between Washington County, the Minnesota Department of Transportation and the Browns Creek Watershed District. That installation will likely require a two-week road closure this April as well.

“For the closures, we’ll do an advanced notice with signs out, and we’ll do all the social media. We're definitely big into outreach and making sure that people are expecting that there will be detour routes posted,” said Bangma.

The engineer reports that the project is on schedule and is expected to be complete by September 2022.

“It’s a great project, and it’s good to be on time,” said Bangma. “The feedback we got last year was that people were impressed with the amount of work we did get done. And we're happy with it. It’s been a successful project and we’re looking forward to wrapping it up this year.”