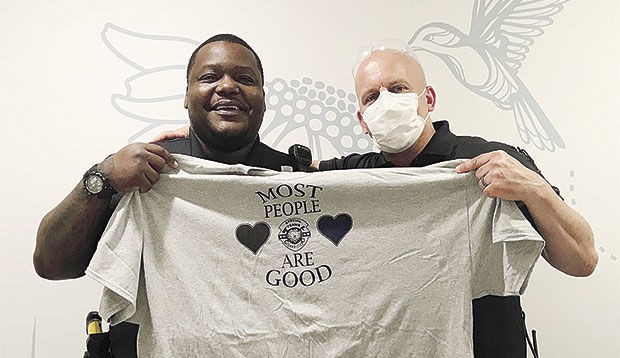 Jeff Loeks gave a co-worker one of the T-shirts, size 4X. He is a supporter of Black Lives Matter, according to Loeks, and “doesn’t like law enforcement, but we exchange ideas.” The blue heart on the shirt represents law enforcement and the black heart, the African American community. 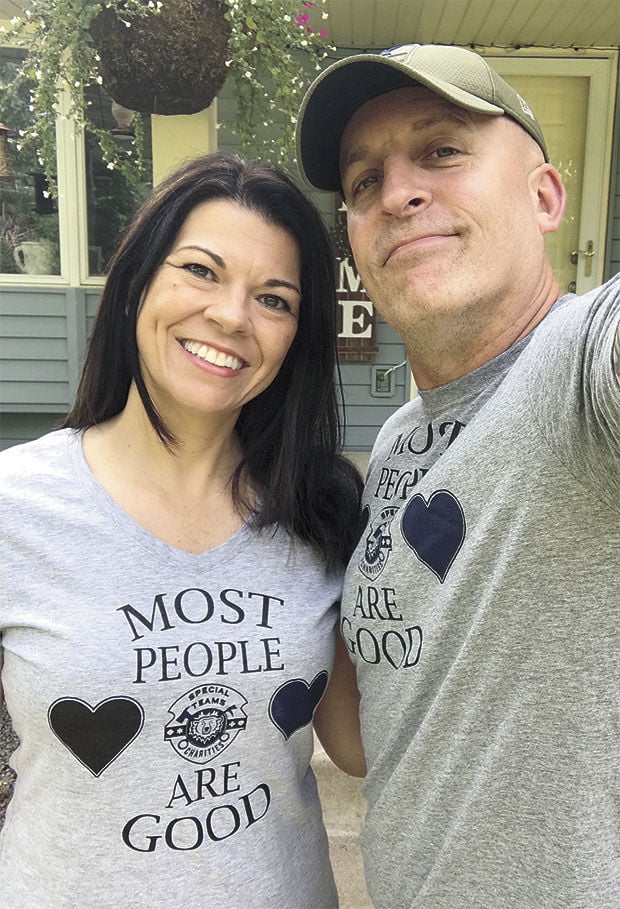 Racheal and Jeff Loeks sport their T-shirts with the message “Most People are Good.”

Jeff Loeks gave a co-worker one of the T-shirts, size 4X. He is a supporter of Black Lives Matter, according to Loeks, and “doesn’t like law enforcement, but we exchange ideas.” The blue heart on the shirt represents law enforcement and the black heart, the African American community.

Racheal and Jeff Loeks sport their T-shirts with the message “Most People are Good.”

Jeff Loeks believes in the power of a T-shirt.

When a woman he knew in hospice care passed away, her children told Loeks their mother wanted him to have $1,000 for his Special Teams Charity. The dying woman appreciated the work Loeks and wife Racheal were doing to help the homeless, among other causes.

So the White Bear Township couple put their head (and hearts) together and decided to spend the money on T-shirts. The simple message: “Most people are good.”

It’s the very same message his adoptive father preaches to his congregation in north Minneapolis and one that has stayed with Loeks. His adoptive parents, by the way, are African American.

“We want people to realize that we really don’t hate each other. That people are good, especially people in law enforcement and health care who are truly making a difference,” maintained Loeks, a former emergency room technician who now works security at Regions Hospital.

When the shirts were delivered, the first thing Loeks did was return to his old neighborhood to give one to a woman buying and donating groceries to anyone who needed them. He’s also given shirts to Ramsey County deputies, coworkers and other hospital personnel.

“I have a lot of friends in law enforcement and they are really decent, generous people. We want to recognize them for what they do,” Loeks said.

Adopted a second time at age 14 by a black minister and his family, Loeks said he spent formative years sitting in church, the only white person in the congregation, listening to the reminder that most people are good. “It stuck with me,” he said. “It’s a blessing I was raised by them and get to identify with them.”

Even something as simple as a free T-shirt can bring joy, Loeks added, noting that the Special Teams campaign hopes to bring a positive message when there is so much “junk going on.”

“The effort won’t change the world,” admitted Loeks, “but sometimes we forget that little things can make a difference.”

If you know someone doing good things who should receive a shirt, message Special Teams Charity on Facebook.