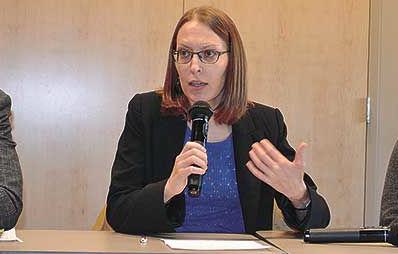 Rep. Ami Wazlawik plans to bring a bill banning TCE back to the House next session.

Rep. Ami Wazlawik plans to bring a bill banning TCE back to the House next session.

WHITE BEAR LAKE — Area legislators representing both sides of the aisle agreed on one thing at a Saturday forum on trichloroethylene (TCE): they want it banned.

There would be exceptions, of course, such as uses in the medical research field, but the three senators and three representatives were confident bills banning the chemical would pass in 2020.

Conservation Minnesota hosted the Oct. 26 forum at the Hanifl Performing Arts Center. Its mission, said Policy Director Nels Paulsen, is to remove toxic chemicals from the environment. Paulsen moderated the panel discussion, noting that a year ago, “We didn't expect to be here. We didn't know about this, but now we do and we're going to do something about it.”

Paulsen was talking about TCE emissions from Water Gremlin that were made public last January. The company agreed to stop using the solvent March 1 and switched to an alternative, tDCE, until ordered to halt its lead coating operation in August so state agencies could investigate further contamination.

One by one, legislators talked about chemicals like TCE and a ban they see as imminent.

The representative added she doesn't want to make a ban difficult for businesses. “Not all companies are bad actors,” Becker-Finn said. “We have to think about alternative chemicals. We have to think carefully about bills and weigh the pros and cons.”

Sen. Roger Chamberlain (Dist. 38-R) promised to reintroduce a bill to ban TCE next session. “I'm certain we'll get something done with it,” he said.

Rep. Ami Wazlawik (Dist. 38B-DFL) was chief author of a bill passed in the House last March banning TCE. “We also got a significant amount of money to look at what businesses are using TCE and to get help to transition businesses off TCE,” she said. A report is expected this month.

“We will bring the bill back in 2020,” Wazlawik promised. “I know for sure it will pass the House. The governor has indicated support for a TCE ban, as well.”

Wazlawik, who represents White Bear Township, where Water Gremlin is headquartered, noted that TCE is just one toxic chemical companies are using throughout the state. “We need to understand there are many more chemicals,” she said. “We don't know the health impacts on humans. Even ones we know about, like TCE, there's no way to directly link that to anything.”

Sen. Chuck Wiger (Dist. 42-DFL) is optimistic a bill banning the chemical will pass the Senate. He told attendees it's important to get to the bottom of what happened in the Water Gremlin case. “We can't let this happen again,” he stated. The company spewed TCE levels in violation of its permit for 17 years.

Conservation Minnesota's Paulsen pointed out that TCE is not limited to the White Bear area. There are dozens of cities in the state with TCE pollution, he said, mostly underground. The cities of St. Louis Park and Edina, for example, are forced to pay millions to remove TCE from municipal drinking water. A TCE plume is traveling through the groundwater into their drinking water wells, he said.

Related issues like state funding for the Minnesota Pollution Control Agency (MPCA), or lack thereof; who bears the cost of testing; chemical company lobbyists and transparency at the Capitol, were also discussed.

Rep. Peter Fischer blamed influence from industry lobbyists for killing the Senate bill before it got out of conference committee last session. Wazlawik said she has a simple solution: she doesn't meet with the chemical lobby and doesn't listen to them. “Public health is more important to me than chemicals,” she retorted. “I have no interest in people who put profits ahead of people's health.”

During a question-and-answer session, one audience member asked if MPCA is at fault.

“We have a lot of unanswered questions,” Chamberlain replied. “That is the reason we asked agencies with authority to look into this. We are waiting for the (legislative) auditor's report.”

Sen. Jason Isaacson (Dist. 42-R) feels MPCA is not funded properly “to do what we want them to do.”

“The problem here is a company created a harm. A company dumped TCE into our environment. We need to focus on that. We don't have funding to actively look for polluters. We have to rely on self-reporting.”

As for transparency, negotiations at the Capitol will continue behind closed doors even if some don't like the process.

Chamberlain called it “a thorn in my side.”

“We work long hours all session to put a final bill together that everyone agrees on. Then they turn it over to the leadership folks who go behind closed doors. We're supposed to wait for the smoke to come out of the chimney,” he commented. “We have to manage it differently. I want to interject the committees more into this to make sure we have a voice.”

Added Becker-Finn, “The Old Boys’ Club does exist in our Legislature. It's like turning the Titanic. It will take time.”

Every panel member acknowledged the advocacy work of the Neighborhood Concerned Citizens Group, “a model for how to look at citizen action in the future,” noted Isaacson.

At the forum's end, a White Bear Lake man issued a plea to the panelists.

“I want you to remember there are sick people. My wife will never be cured, and I know from the bottom of my heart where it came from. We're not the only ones. There are hundreds in the White Bear Lake area. I want you to think about them.”