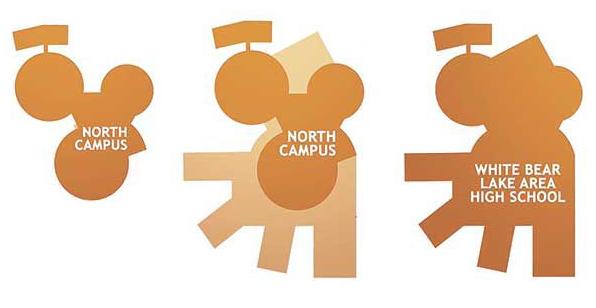 This is what the North Campus building footprint might look like if it is expanded. Graphic representation of proposed plan. Not actual building design. 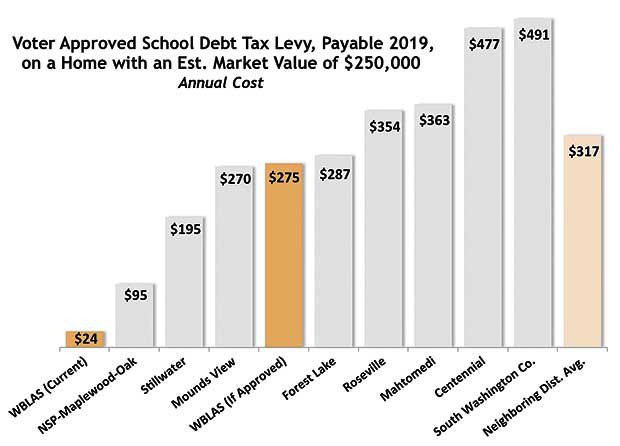 Compared to neighboring districts, White Bear Lake Area Schools currently has a low voter-approved school debt tax levy. If the bond passed, it would still be below average.

This is what the North Campus building footprint might look like if it is expanded. Graphic representation of proposed plan. Not actual building design.

Compared to neighboring districts, White Bear Lake Area Schools currently has a low voter-approved school debt tax levy. If the bond passed, it would still be below average.

The White Bear Lake Area Schools board officially clarified it will not use eminent domain to acquire properties for the planned one-campus high school at North Campus. Eminent domain proceedings are used by a government entity to expropriate private property for public use and pay compensation for the property taking.

The board unanimously approved a resolution at a meeting Sept. 23 affirming that it will not use eminent domain and that North Campus can be expanded without the acquisition of any homes near the site.

The district has expressed interest in purchasing about 20 homes near North Campus for expanded parking and sports facilities, if homeowners are interested in selling. About $6 million of the $326 million bond referendum on the November ballot would be for this potential purchase.

District leaders have continued to receive questions about whether the district will take people’s homes for the expanded one-campus high school, said Superintendent Wayne Kazmierczak, even though the board has clearly stated they would not use eminent domain.

The resolution was an attempt to make the district’s position clear. “This expansion of North Campus can occur on the land we already own,” Kazmierczak said. The avoidance of eminent domain has been the intent of the facilities planning committee and board all along.

Board Clerk Ellen Fahey said the resolution was made to dispel a rumor. “This board has always stated since the beginning that we will not use eminent domain,” she said.

District compares taxes to its neighbors

Kazmierczak also presented some new information to the board on the bond and how its tax impact compares to neighboring districts. The average neighboring district voter-approved school debt tax levy was $317 in 2019 for a home with an estimated market value of $250,000.

“We are not an outlier,” Kazmierczak stated. The district has explained that the bond will provide much-needed updates to all schools in the district. The average age of district buildings is 50 years.

Big changes that are part of the plans include a new elementary school in Hugo and expanding North Campus to house all high school grades. Oneka Elementary will be converted from a grade 2-5 school into a K-5 school. Hugo Elementary would be converted from K-1 to an early childhood center. Sunrise Park Middle School would be moved to South Campus. Sunrise would become an early childhood center, transition center and senior center, and would house district offices. The vacated District Center, where district offices are currently located, would be an expansion for Central Middle School. Districtwide safety and security improvements as well as flexible learning spaces are also part of the plans. The plans were put forth by a 90-member facilities committee that met this winter.

However, Kazmierczak let residents know that homeowners with household annual incomes of less than $113,150 are eligible for the Minnesota Homestead Credit Refund.

More information on the homestead credit refund can be found at revenue.state.mn.us/homeowners-homestead-credit-refund.

In other action, the school board:

•Certified its preliminary 2019 payable 2020 property tax levy. The max increase will be 6.79%. The tax impact of the $46.9 million levy would be about $5 per year, or 42 cents per month, for the average value home at $275,000, according to Assistant Superintendent for Finance and Operations Tim Wald. The final levy will be certified in December. The levy refers to operating costs and is not based on the bond referendum to go before voters in November.