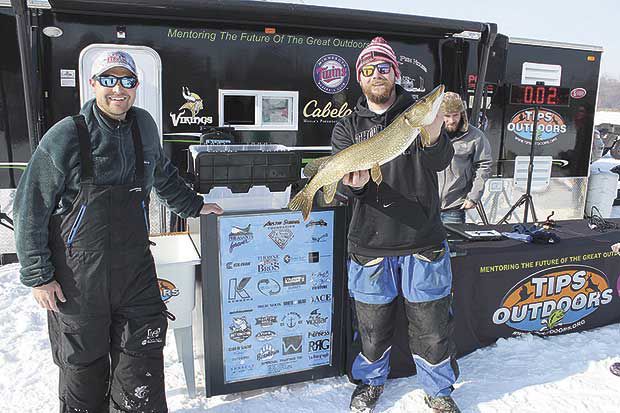 Matt Ribar, right, of Centerville, won the prize for the largest fish at the Austin Strong Ice Fishing Tournament last year. He is pictured with Tournament Director Ryan Sorenson. 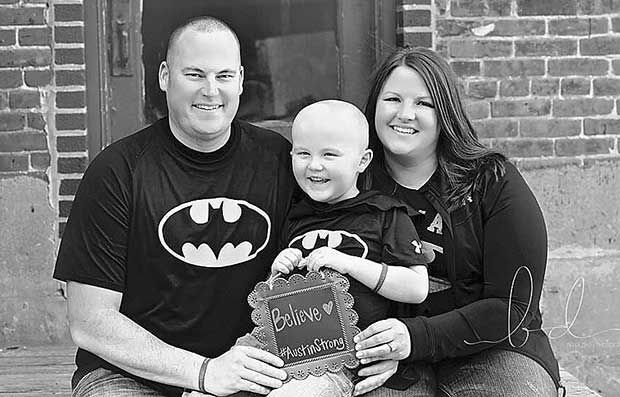 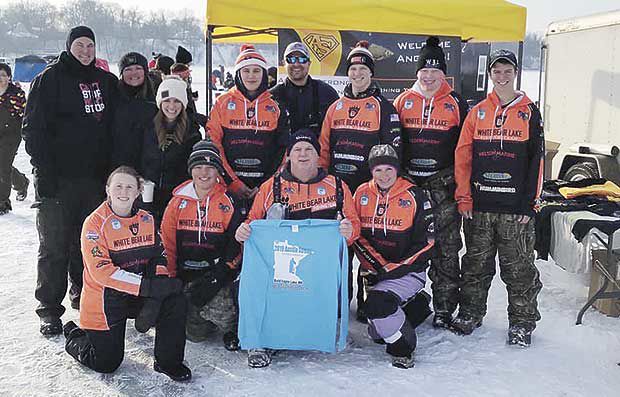 Matt Ribar, right, of Centerville, won the prize for the largest fish at the Austin Strong Ice Fishing Tournament last year. He is pictured with Tournament Director Ryan Sorenson.

Jig. Set the hook. Reel it in. A little crappie surfaced from its wintry home below the ice and stared at me for a bit with its googly eyes. I set it back in the hole from whence it came and checked my bait before sending my line back into the icy cold water.

Six-year-old Austin Smith used to love to ice fish. But he was no longer around after a rare brain cancer took his life. Yet, he was the reason I was here on Bald Eagle Lake learning how to ice fish for the first time in my life.

“He was a guy's guy,” said his godmother, Meg Sorenson, as the ice shelter's snowy ground turned from white to gray with the setting sun. “He wanted to go do whatever his dad was doing.”

Her cousin's son Austin was diagnosed with a rare childhood brain tumor, diffuse intrinsic pontine glioma (DIPG), when he was 5 years old. He participated in clinical trials and fought against the incurable tumor for 16 months until he passed away in May 2016.

Sorenson's cousins, Mikinzie and Britt Smith, of Monticello, Iowa, created a foundation in his memory to fund research on the fatal cancer to fight for other children. About 300 children in the U.S. are diagnosed each year. The Austin Strong Foundation has raised close to $300,000 over the last several years.

Funds have been given to research, trials and the DIPG Collaborative. said Mikinzie Smith in a phone interview later that week. The foundation has also funded bucket list experiences for children and donated to the children's hospital in Iowa City.

Meg and her husband Ryan created a Minnesota chapter for the foundation and host an annual community ice fishing contest on Bald Eagle Lake to raise funds. The third annual event will be held Feb. 1. Last year, the event raised $11,000.

“We're working with Mayo to allocate funds to Minnesota to fund trials,” Sorenson said. Her godson participated in several clinical trials with Mayo. The Smiths traveled across the U.S. to pursue treatment options, consult with specialists and participate in trials.

Austin had no signs of cancer until his eyes began crossing periodically. Still, it took several months to discover what was wrong. He began having balance issues. His parents were shocked when a practitioner finally discovered the brain tumor. They were told there was no cure and to take him home and make memories. That they did.

“We actually got him out ice fishing quite a bit the winter he was going through treatment,” Smith said. “He was very outdoorsy. He liked anything outside with the boys.”

The foundation hosts annual events to raise funds to fight DIPG and childhood cancer. According to Smith, only about 4% of the taxpayer-funded National Cancer Institute’s (NCI) annual budget is directed toward pediatric cancer. “We felt so defeated at the time when we were told that,” Smith remembered.

Meg and Ryan decided to do their part to contribute through the Austin Strong Ice Fishing Tournament to Freeze Out Childhood Cancer.

Ryan, who grew up fishing on Bald Eagle Lake and is an avid ice fisherman, directs the annual tournament. The event is meant to provide family fun, he said. There are prizes for the largest, and even the smallest, fish.

“Come out and fish and have a good time,” he said. There will also be a raffle to raise funds for the foundation. The event is $30 for adults and $15 for youth. Attendees bring their fishing gear and bait. Holes will be drilled before the event at Bald Eagle/Otter Lakes Regional Park.

It should be a good spot. When we set off to go ice fishing last week, Ryan parked the four-wheeler over a seemingly random spot on the snow-covered lake. But he saw something I didn't. I watched as he and Meg set up a portable shelter and then I helped drill a hole. He sent down his sonars.

“We're probably over a school of a couple thousand fish right now,” he said, pointing to the bouncing colors on the screen. That was a little hard to believe. But based on the number of fish I caught in an hour, those fish were surely down there in their wintry haven.