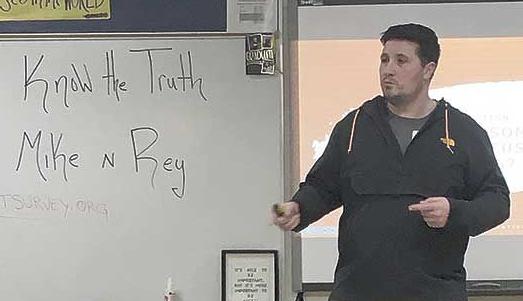 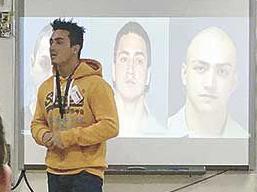 Underage vaping is illegal and an addiction that can easily lead down an unintended path.

That’s what happened to Rey Khammavongsa when he started smoking marijuana in middle school. The choice took him down a path that led to no graduation and a young adult life in prison. “Marijuana opened the door to a new crowd,” Khammavongsa told a health class at Mahtomedi High School this month.

“I’m not here to tell you what to do,” said Khammavongsa, who works for Minnesota Adult and Teen Challenge’s Know the Truth Prevention Program. He hopes his story will speak for itself. He said addiction can happen to anyone who begins to make those first, seemingly innocent, bad choices. He came from a good family — his mom was a teacher and his dad a business owner.

But when he became addicted to harder drugs, he developed a $200/day habit he needed to feed. This led to a life of crime — he participated in armed robberies and home invasions in order to buy drugs. Even though he is now sober after going through Teen Challenge’s long-term treatment program, there are many things he cannot do because he has felonies on his record. He can’t travel out of the country and he can’t hunt, something he loved to do with his dad while he was growing up. It’s also difficult to find a job.

“I just started back behind the school bleachers,” Khammavongsa remembered. “You all have to make a choice,” he told the class. “Think of me when you make a choice.”

Khammavongsa’s co-worker Mike Struyk had a similar story: he started on weed in middle school. This  led to about two decades of addiction, during which he lived in a tent as a homeless person and committed crimes to feed his hard drug habits. Once he almost died, but was revived by Narcan. He hit rock bottom when he was kicked out of a treatment center in the middle of the winter and found himself homeless.

“I wondered, ‘How did I get here?’” he said. “I was in a class like this and I thought the person (presenting about drug addiction) was a loser.” He realized he had become that person.

But now he has been sober for two years after the long-term treatment program at Teen Challenge. He said he doesn’t visit school classes to tell youth what to do, but offers a few pieces of advice to avoid the devastation of addiction: Have the courage to ask for help, choose friends wisely and be firm with your “no.”

Marijuana, vapes, alcohol, medicine not as innocent as it seems

Struyk said smoking weed, vaping and drinking alcohol as a youth are not as innocent as they seem. Once Struyk took marijuana that he didn’t know was laced with a hard drug and he had to be hospitalized. Marijuana was the first drug that got him into legal trouble at age 18. The DUI and drug possession charges on his record don’t specify what drug it was, and the charges affected his ability to obtain work.

Vaping can also lead to a life of addiction. “Nicotine is so addictive,” Struyk said. It is also harmful to the body and brain development. Vaping chemicals have been shown to cause health issues. There are legal ramifications for minors who are found in possession of vapes. The vaping industry has been clearly marketing to minors in a quest to make money, he added. “They are not different than a drug dealer,” he said. More than 40 percent of high school students have reported that they’ve tried vaping before, a number that has been steadily increasing over the years, according to Teen Challenge.

Alcohol is the second most deadly drug after nicotine and tobacco. “It’s socially acceptable, but the reality is there are legal, physical and emotional consequences,” Struyk said. It is a “gateway drug” that takes away your ability to control your mind and body and make good decisions, he explained. Again, marketing lies that alcohol will enhance your life experience. “In reality, you fight with your best friend or are sick,” he said.

Prescription pills are also a danger: Struyk has had three friends die from counterfeit pills. “They are dangerous if misused or abused,” he said. If you are found in possession of a prescription pill that was not prescribed to you, you can be charged with a narcotics violation.

“There are a lot of things you can’t control in life,” Struyk told the class. “But you can choose ‘yes’ or ‘no’ to drugs.”

Struyk said he wished he realized when he was younger that not as many youth were probably using as he thought. He was just in the wrong crowd. According to the Minnesota Adult and Teen Challenge Know the Truth Student Survey, about 78% of today’s Minnesota youth choose not to use drugs.

However, that means almost one-fourth of students do. Struyk is concerned for those students. If you can’t go more than four days without a substance, it means you are probably addicted and should get help, he said.

Know the Truth presenters will speak at more than 160 high schools throughout the state this year. The program has been educating students on substance use for a decade; its representatives have been visiting Corey Ratzloff’s Mahtomedi High School health class for just as long.

78% choose not to use drugs