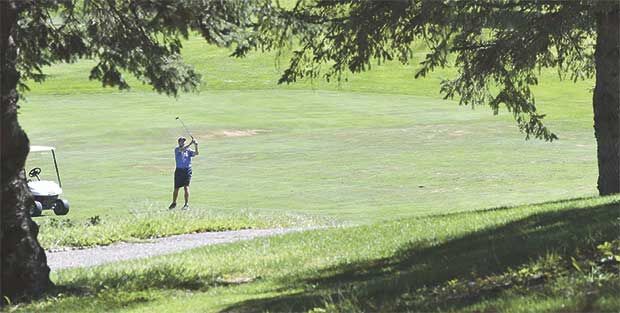 This is the last season for Stillwater Oaks golf course in Grant. At least, under ownership of the Nicholson family.

Formerly called Sawmill, the picturesque, 18-hole course is for sale.

Two local investors are knocking at the clubhouse door, but Howard Nicholson and his siblings want the 146-acre property to remain a golf course rather than see it carved up for homes.

Their late father Robert W. Nicholson Jr. purchased the land in the early ’70s. Originally a horse farm, he started building the golf course in 1974 with a man named Ron Gillett, according to Howard. "It was his vision to turn the property into a public course. We want it to stay that way."

So Howard and his four siblings, Victoria, Ben, Cindy and Tanya, (his older brother Robert "Bub" the III died in 2019) are thinking outside the tee box.

They want to sell the well-seasoned, 40-year-old golf course to golfers.

"We're hoping a consortium steps up to buy the property," Howard said. "They would own the golf course lock, stock and barrel, as my dad used to say."

Investor owners would play golf for free, of course, in an arrangement similar to a time-share.

Appraised at $2.3 million, 23 investors putting in $100,000 could buy it, but there is no maximum on number of shareholders, Howard said.

If there is enough interest, he plans to hold a seminar from 2-4 p.m. Sept. 26 at the clubhouse (with social distancing) to explain the concept.

The property is gorgeous; like a "nature sanctuary," added Nicholson, who grew up in Birchwood and now lives in Port Wing, Wisconsin. The wildlife is abundant and mature cherry, walnut and oak trees grace the landscape of the popular Par 70 course.

The 18-hole destination at 11177 McKusick Road N. is what Nicholson describes as a budget golf course. "It's one of the cheapest places to golf in the metro," he said, adding golfers play 22,000 rounds a year.

Several management companies have leased the course over the years from the Nicholsons, making significant improvements. A group led by Dan Pohl ran the business for 30 years. Pohl is the one who named it Sawmill. When his contract expired in 2014, there was a less-than-amicable parting of the ways and the name went with Pohl. The course then became Stillwater Oaks under the management of Northco Golf & Hospitality and company president Frank Jermusek.

"We tried to make a go of it with them," recalled Nicholson. "We had a five-year management contract, but they were the ones making money. Once that was done, we hired a golf pro from Tartan Park, now The Royal." He admitted that financially, the business is in decline, but it does break even.

The Nicholson siblings are not allowed to run the business themselves. That's basically due to how the family trust is set up, according to Howard.

After their father died, older brother Bub hired a White Bear attorney who made it so no family member could work at the golf course or receive any compensation, Howard said. Bub's children, Will and Jessi, are also beneficiaries.

The decision to sell is recent. "It's caused too much tension between family members," Nicholson maintained. "Too many cooks spoil the broth. So the decision was made to sell."

Grant has a 10-acre moratorium on developable land, making 14 lots "very expensive," Nicholson pointed out. There's also the infrastructure that comes with a golf course, irrigation pipe and timers, wells, retention ponds and a clubhouse that would require removal. There is a large parking lot.

"We are thinking about the wildlife and the golfers," continued the family spokesman. "We are only asking for land value. It'd be closer to $3 million if we went with a developer."

Nicholson figures the deal is good and a win-win for everyone. Land is appreciating 5 to 7%, he pointed out. "It's a good investment, a good rate of return. Land is less risky than the stock market and it's good as gold. As the saying goes, they're not making any more of it."

Anyone interested in more information can email Howard Nicholson at abc54865@yahoo.com or call him, 651-368-5138. "I'd love feedback to know if our idea is viable," he said. "We want people to know that Stillwater Oaks is unfortunately closing, but then again, maybe it's not."