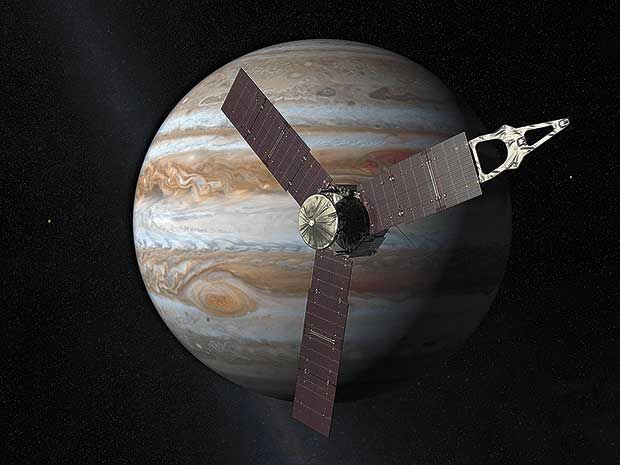 An artist’s rendering of the Juno spacecraft in orbit around Jupiter. 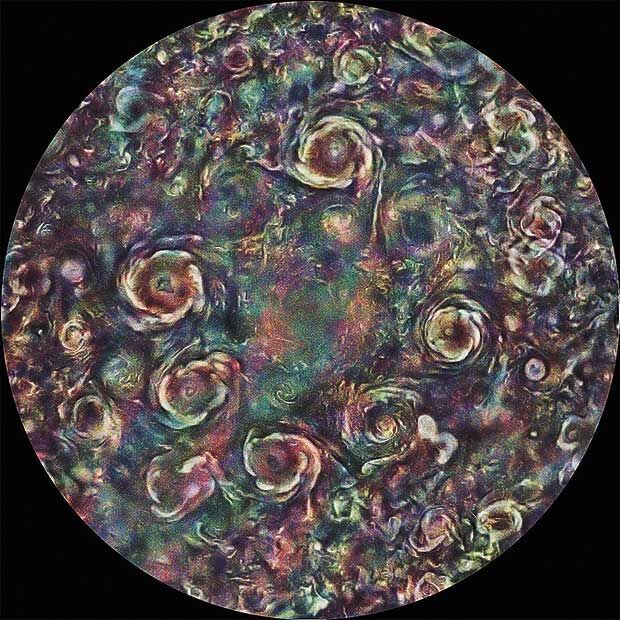 This image uses bright colors to make the polar cyclones of Jupiter stand out. Dr. Sadie Elliot discussed her research on these storms with eighth-graders at White Bear Lake middle schools last week.

An artist’s rendering of the Juno spacecraft in orbit around Jupiter.

This image uses bright colors to make the polar cyclones of Jupiter stand out. Dr. Sadie Elliot discussed her research on these storms with eighth-graders at White Bear Lake middle schools last week.

When it comes to space exploration, there are a lot of unknowns. For example: Does time pass at a different speed in space than on Earth? How does a gas planet stay in a spherical shape? And have there ever been life forms spotted on other planets or galaxies?

These were some of the questions posed by White Bear Lake eighth graders in a virtual visit with NASA physicist Dr. Sadie Elliot on Feb. 24. Science teacher Samantha James, who attended classes with Elliot during her time at Augsburg University, arranged the meeting, which was livestreamed to students at Sunrise Park and Central Middle School. Student interviewers led the question-and-answer session with Elliot, a postdoctoral physicist at the University of Iowa, who works on NASA’s Juno mission in orbit of Jupiter.

Juno launched in 2011 and arrived in orbit of Jupiter in 2016. Its mission is to collect information that will shed light about the planet’s origin and evolution, which will in turn reveal more about the history of our solar system. Elliot’s specialty is in plasma wave science, especially the plasma wave activity on the poles of Jupiter. Photos of those regions show massive hurricane-like swirls called polar cyclones, which last for years in the unique planetary conditions of Jupiter.

“Plasma waves are basically fluctuations in electric and magnetic fields,” Elliot explained. “If we can detect the frequency of those waves and determine what kinds of waves they are, we can use that to then get the electron density. There are regions where we have a lot of electrons, a very dense population, which can be important because it might mean there’s a lot higher radiation.”

The clouds in the higher regions of Jupiter are about 234 degrees below zero, since the planet is so distant from the sun. But scientists believe the planet core may be as hot as 43,000 degrees—hotter than the surface of the sun. This differential means that the planet emits a lot of radiation. The Juno spacecraft is programmed to weave through the radiation belts surrounding the planet, keeping its instruments free of the effects of radiation for as long as possible. These conditions are not hospitable to life as we know it, Elliot said. But the ice-covered moon of Europa might have some potential for the discovery of otherworldly life forms.

“Jupiter is so far away from the sun, so it doesn’t necessarily have the resources that we do on Earth, where we think life forms from photosynthesis and interaction with the sun,” Elliot said. “The planet of Jupiter has a very strong radiation, which blasts all of its surrounding moons, so we do believe the radiation could be fuel for life on other moons like Europa.”

When asked how Jupiter’s famous red spot was formed, Elliot said it’s a question scientists are still trying to answer.

“We believe it to be generating a lot of the energy that contributes to the high temperatures at Jupiter,” she said. “However we don’t really know what’s going on there. If one of you wants to work on that later on in your career, go for it, because I think we’ll be working on that question for quite a while.”

The landing of the Perseverance rover on Mars, which occurred earlier this month, was another topic of discussion during the virtual meeting. Elliot did not work on the Perseverance mission, but watched the landing with some of her colleagues on the Juno team. “That was a really great moment in the history of humanity,” she said. “When it actually landed and we got pictures and all this video, it was just amazing to see. I’ve worked on Juno my entire graduate career, and we get pretty pictures like we’re showing here, but we don’t get video and real-time data.”

Students also came prepared with questions about what scientists have learned from the Cassini spacecraft in orbit around Jupiter, and the Voyager I and II probes that have traveled into space farther than any other manmade object.

Many of the student’s questions centered on Elliot’s career as a scientist, and how she knew it was something she wanted to do. Elliot responded that she never thought this would be her job, but she loves the freedom of designing her own research projects and the excitement of pushing the boundaries of space exploration.

“Working on Juno, I’ve truly been inspired because it’s brand new data, a brand new mission,” she said. “We’ve never been in this type of orbit before; just the fact that humanity can go to an entirely different planet from ours and be out there with a spacecraft and be able to get data in real time, that was definitely a driver for me.”

In response to one student’s question about how to get started on a science career, Elliot recommended physics, geometry and mathematics classes. But it’s not all about the hard science—people from a lot of different backgrounds work at NASA.

“I won’t say that it’s easy what I do, but as long as you have a passion for it, you’re going to be OK,” she said. Hard work is often more important than genius-level intellect, she noted.

James hopes that students came away from the discussion with a more immersive understanding of space science, and a new perspective on the possibilities for their future.

“I am hoping students can see that anyone can do science, and you don’t always know how you’re going to end up in a science career,” she said.