The architect’s renderings of the project were shown to more than 60 neighbors attending a courtesy meeting, via Zoom, hosted by the developer. The apartment/parking complex would be situated directly behind the downtown Armory. 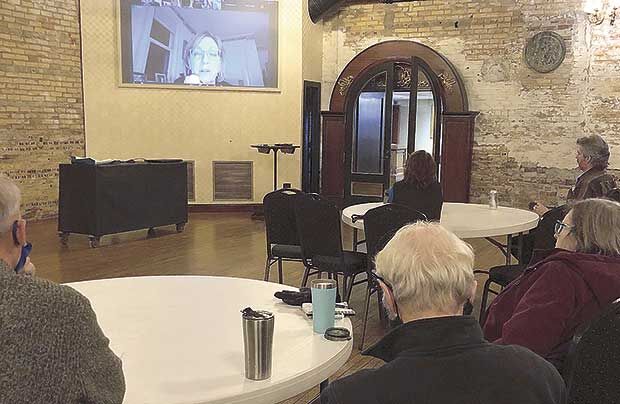 People gathered at the Kellerman Event Center to hear about the corner proposal on a Zoom meeting. The center was also the site for a Feb. 23 meeting (after press time) with attorney Fritz Knaak regarding the project.

The architect’s renderings of the project were shown to more than 60 neighbors attending a courtesy meeting, via Zoom, hosted by the developer. The apartment/parking complex would be situated directly behind the downtown Armory.

People gathered at the Kellerman Event Center to hear about the corner proposal on a Zoom meeting. The center was also the site for a Feb. 23 meeting (after press time) with attorney Fritz Knaak regarding the project.

WHITE BEAR LAKE — Whether an apartment/parking ramp project at Third Street and Cook advances remains to be seen after neighbors gave the developer an earful at a meeting last week.

TE Miller Development LLC, an Eden Prairie company that owns and manages apartment communities, has the old, green house at 2229 Third St. on contract with the contingency that the project passes the many hoops required to break ground. The corner property sits behind the Armory and to the east of a public parking lot.

After “back and forth with city staff,” what’s being proposed is a 40-unit, four-story apartment building connected to an open-air parking ramp that will serve both the public and, in a separate area, tenants. Although a market study is still needed, the company vice president, Robb Miller, indicated the “high-end” units will rent at market rate, or about $1,200 per month for a studio and “north of” $2,000 for a two-bedroom.

At this point, TE Miller would pay for the L-shaped apartment building and the city will pay for the parking ramp using tax increment financing and a possible Met Council Livable Communities grant.

Concept drawings shown at the meeting are preliminary, but Miller’s architect said they are striving for a “palatable development” with their design. “We want to enhance the urban fabric of downtown,” said Evan Jacobsen, an architect with Tushie Montgomery.

At a height of 47 feet, Jacobsen said they are “cognizant that this is a big building for downtown. While it’s an additional mass on Third, the building doesn’t become overly intrusive,” he stressed. “It’s not in your face.”

Miller pointed out that the project would not be viable if limited to three stories. In fact, they had more density when first proposed, but “ultimately, parking is the most important thing to the city,” he said.

The subject of parking, or the city’s lack of it, was an issue brought up many times during the 90-minute meeting. The developer contends the elevated ramp will service the downtown core with its 67 public stalls. “We don’t want to lose any downtown parking, but improve the streetscape,” Jacobsen said. “We like to walk through neighborhoods to see their character. We know it’s incredibly important to residents of White Bear Lake, and we want to get it right.”

The 60-plus people attending the meeting, however, seemed to think it was all wrong.

“I’m appalled the city let you in the door,” Cox stated. “None of us want this.”

Cox told the Press he’s not opposed to a “good design” for the corner. “A good design makes money,” the contractor said. “It can’t be a prison wall 50 feet high. The developer is blowing smoke and mirrors trying to convince a bunch of really smart people this is a good idea.”

He contends that the proposal does not gain more parking. “We (taxpayers) currently own that (Third Street) property. This is our parking lot,” Cox said. “The public is getting 60 spots back that already exist.”

After the Feb. 16 meeting, Cox and his wife Emily, a Realtor, got busy on the phone talking to council members, city staff and the owner of the green house, John Casiday. “He’s more concerned about something good happening there instead of selling his property,” Cox relayed. “I told him perhaps the neighbors would purchase the property as an LLC and build something in this commercial area that better suits the historic district.” According to Cox, at least 65 neighbors are voicing formal opposition to the city regarding the project.

“At this point, we’re hoping enough people speak up against it that the developer will go away,” Cox said.

Terry Kellerman, owner of Kellerman’s Event Center, is also steamed about the parking. “The property has a footprint big enough to accommodate all our parking needs,” he argued. “They are giving away our best spot.”

Like Cox, Kellerman said he doesn’t know anyone who favors the project. And he was especially miffed the city didn’t ask for input sooner.

“They’ve been working on this a year, and this is the first we’ve heard about it. That’s not right,” he said. “This influences my business, and we should have known about the project earlier. The same thing for the people remodeling expensive homes across the street from it.

“Urbanizing White Bear Lake seems to be the recurrent theme, just like the Rush Line project,” Kellerman continued. “This all fits that picture. Who will ride the bus? Apparently, the 40 people who live in those apartments.”

City Manager Ellen Hiniker emphasized that last week’s meeting was the developer’s first opportunity to share the concept and seek input from the community. “It’s the first step in a long process that necessarily begins with the neighbors nearest to the site. They are taking this initial feedback into consideration as they determine their next steps,” she said.

Someone asked Miller if he’d considered other locations for market-rate units. He replied, “not at this time. But we’re open to it.”

A formal application to the city is not anticipated until late spring or early summer. If everything falls into place, construction would start spring of 2022.

This proposed project is a violation of many things we value in WBL- namely quaintness & charm, manageable traffic, and building and zoning ordinances,

How can the elected leaders entertain such a ridiculous proposal? We should expect more from our leaders. They are elected to represent the citizens - not a developer’s interests from clear across town.

WBL citizens need to start paying attention to this. These building regulations help keep our community nice and livable.

What if these type of “urban” apartment buildings start popping up all over WBL and in other back yards?? What will this mean for our little town?

There are a lot of questions to be answered here. Especially before the city decides to finance a parking lot that that WBL already owns. ??? This project should be DOA.

40 units could potentially bring in up to 80 cars. 67 parking spaces would be in the parking log. Where would this leave the public who is using this parking lot presently? Not a realistic plan.

Could the city be courting this developer because they long for the taxes it will bring in? Each apt will yield a significant tax harvest for the city and the higher the building goes up , the more tax income for the city! The city knew residents would not want this. They have motivations of their own.

Rule number 1,2, 3 in these issues is always FOLLOW THE MONEY.

The City tried to put up 100 units on the corner of Bellair and Cty Rd E a couple years ago. This is not a town for that kind of density. Whether this is the Met Council or the City, vote these officials out of office or have them put up these building in North Oaks or Dellwood. See how far that goes...

Like I said, follow the money. Met Council dangles all kinds of goodies and the cities grab them with little regard for us citizens (taxpayers). Just what part of "NO" does the city manager not understand? It appears this first meeting was only the opening salvo, and much more awaits. If the city were responsive to the residents, this project would be DOA and never brought up again.

Prepare for a long process. And their side has all the lawyers and knowledge of how to weasel things against the wishes of those affected. Need proof? White Bear Boat Works project.