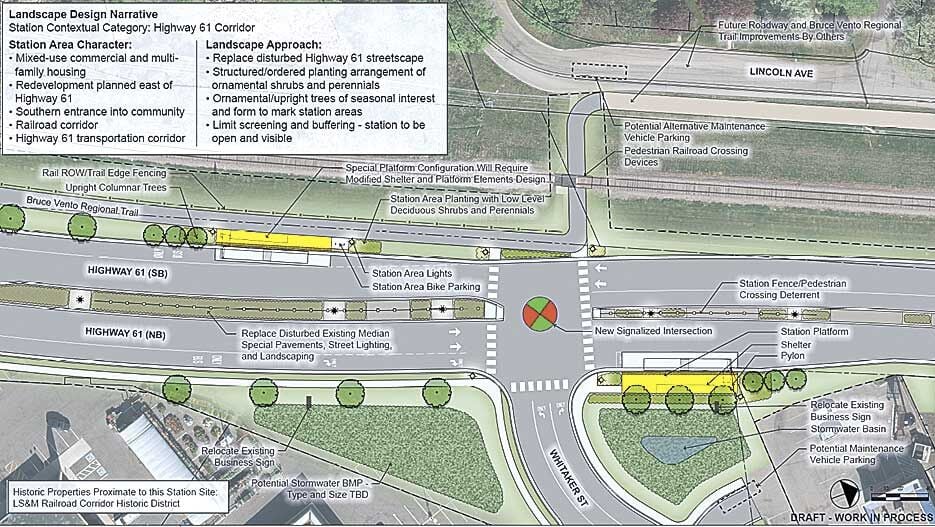 This MnDOT layout shows a redesign of Whitaker Street that includes a traffic signal and driveway closure north of the intersection. A Rush Line bus station is planned in front of Lakeside Shops. 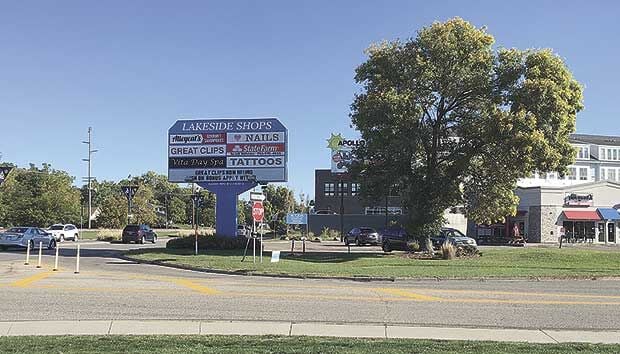 This mall sign near the Whitaker Street intersection would be removed under the proposed plan, as would a driveway accessing the businesses. 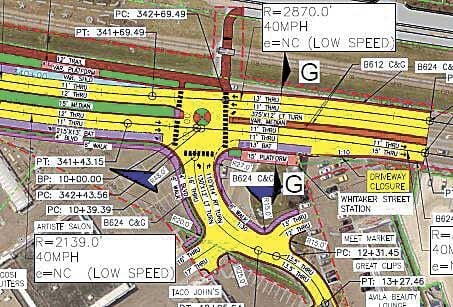 The triangle on the image is what is anticipated to be a easement/acquisition from owner Richard Eitel at the time of the project and would be acquired by Met Council. The pylon sign in question appears to be located fully south (left side of image) of the property within city rights of-way outside of the triangle.

This MnDOT layout shows a redesign of Whitaker Street that includes a traffic signal and driveway closure north of the intersection. A Rush Line bus station is planned in front of Lakeside Shops.

This mall sign near the Whitaker Street intersection would be removed under the proposed plan, as would a driveway accessing the businesses.

The triangle on the image is what is anticipated to be a easement/acquisition from owner Richard Eitel at the time of the project and would be acquired by Met Council. The pylon sign in question appears to be located fully south (left side of image) of the property within city rights of-way outside of the triangle.

WHITE BEAR LAKE — Plans to close Hwy. 61 access into a strip mall and redesign a nearby intersection attracted a council chambers full of Rush Line opponents to a public hearing last week.

The Minnesota Department of Transportation (MnDOT) is asking City Council's consent to close Lakeside Shops' driveway for several reasons: it's too close to a new stoplight at the Whitaker Street/Hwy. 61 intersection and it's in the way of a new bus station on the northeast corner.

Municipal consent is required by statute when a project alters access or requires acquisition of right of way, MnDOT Principal Engineer Sara Pflaum explained to council.

The drainage ponds in MnDOT's design include one sited on city-owned land between Hwy. 61 and Hoffman Road to manage stormwater running into an impaired Goose Lake. There is no stormwater management there now. A second pond is located near a green sliver of land that holds a large pylon sign listing Lakeside Shops tenants. The sign is on city right of way needed for the bus station.

Mall owner Richard Eitel isn't happy about the proposal. He is frustrated with the city and finds the state's proposed layout too confusing to understand.

The mall owner questions why the intersection isn't moved 100 feet to the south on public property, which Eitel said would make more sense. He believes one reason is the city wants his pylon sign listing the mall shops to go away.

"They've (the city) never liked my sign," he maintained. "Replacing it with a small monument sign wouldn't be seen behind a bus station and wouldn't be fair to my tenants. Signage plus people's ability to get in and out of my property impact success. Tenants want that access." Another issue: The plan will take parking spaces from the businesses, he added.

The mall owner said he expects to settle the issue through the legal process. "I know I'll have to battle condemnation in court," Eitel stated.

Eitel did not appear before council at a Sept. 28 public hearing on the issue. He is recovering from heart surgery "and didn't need the stress." Maplewood attorney Diana Longrie said she was speaking on his behalf when she stepped to the podium. She told council the mall owner is not against safety measures, jut the impacts on his tenants.

"The proposal before you is premature. It impacts seven local businesses. You've heard the expression three strikes and you're out?" Longrie asked. "For a small business, access is strike one; parking is strike two and signage is strike three."

Most of the people who came forward at last week's public hearing were opposed to the $500 million Bus Rapid Transit (BRT) project.

Some thought the line should at least end at Whitaker and not enter downtown. Many believe the buses coming to White Bear will be empty.

Spokesmen like Tim David with the anti-Rush Line Coalition iterated that his group is not against public transportation, just the number of buses driving through the city. "Ridership numbers should be reevaluated in a post-COVID world," he said.

Lisa Brock, a 26-year resident, feels it's premature to predict the impact of COVID on ridership. A bus commuter for years, Brock supports the improvements at Whitaker and the BRT. "Public transit in White Bear Lake has been infrequent and inadequate. Eighty-plus buses a day are a drop in the bucket compared to the number of vehicles using 61," she said.

A who's who of speakers opposed to the project included Greg McNeely, identifying himself as with the Manitou Fund, who questioned if the BRT was self-sustaining, adding he wasn't opposed to public transportation, just the number of buses; Vicki Ford, who feels ridership numbers must be reassessed post-COVID; and Kit Artig, a Boatworks Commons resident who believes the "massive opposition" to the project is being ignored.

"This stoplight is just the first of the drip, drip, drip that leads under the radar to the Rush Line BRT, " said Artig, who pointed out that the Whitaker signal is the third stoplight within a half mile. She warned that the green corridor that is the Bruce Vento Trail will become a "cement corridor" and wondered how the "unneeded" project got this far along.

Catherine Nicholson, who gave her address as the Dellwood peninsula, questioned why the bus line was using a congested Hwy. 61 instead of I-35E. "It frightens me how much money the federal government can throw at this," she said, and asked council to "pause" the project for reevaluation.

Greg Lees is another longtime resident from the south side who helped start the anti-Rush Line Coalition. When coalition volunteers made their first appearance at Marketfest this summer, Lees said he was "gobsmacked by the passion displayed to us. People stood four deep to sign our petition." Lees encouraged council to "get rid of the Rush Line."

Paul Bolsted is a Fourth Street homeowner who commutes by bicycle to St. Paul along the Bruce Vento and supports the bus line. "You have to think about public safety," said the resident. "I have no issue with the number of buses. We have to plan for the future."

For years, at least as far back as 1986 according to council minutes, city leaders have attempted to address what it considers a dangerous pedestrian crossing at Hwy. 61 and Whitaker, noted City Engineer Paul Kauppi.

"These long-desired intersection improvements are finally being triggered as part of the Rush Line Bus BRT project, as well as the planned future extension of the Bruce Vento Trail through White Bear Lake," Kauppi said. "The signalized intersection will improve safety for both buses and pedestrians and improve access to the Marina Triangle commercial area."

MnDOT's Pflaum indicated there were 10 crashes at the intersection between 2017 and 2019; four of which were pedestrian-related. The crash rate is higher than state average but not critical, she said.

At the conclusion of the hearing, Mayor Jo Emerson reminded council they would not be acting on the resolution that night since there were so many questions. Council Member Bill Walsh felt the council could save its comments until Oct. 12.

The council "would not be acting on the resolution that night since there were so many questions". Really? None of these questions were new or even unexpected. White Bear Lake is being dumped on by Met council by giving us a choice of bad (current plan) or worse (US Bank) options for the bus drivers' toilets and parking lot. My opinion is that if the P=purple line must come to WBL, it should terminate at or before Whittaker with rest facilities built at the old city maintenance location. Doing that would certainly require a different design for the Whittaker. intersection

The passionate response at the public hearing was clear. This is campaign topic. If the decision has to be made before the mayoral and council elections, the only honorable choice is to reject this plan and let MnDot come back with a better one for the new administration to act upon..