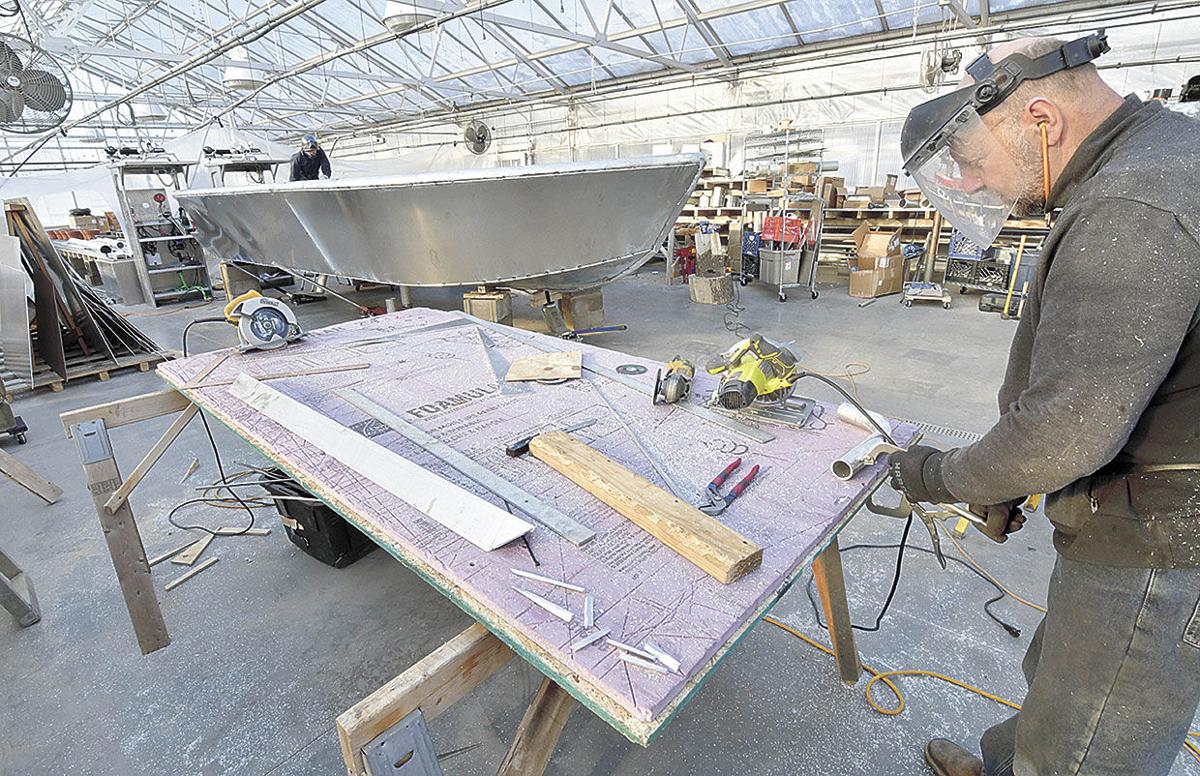 Dave Barhan works on an aluminum pipe fitting in the boatbuilding shop that is temporarily housed in the greenhouse. 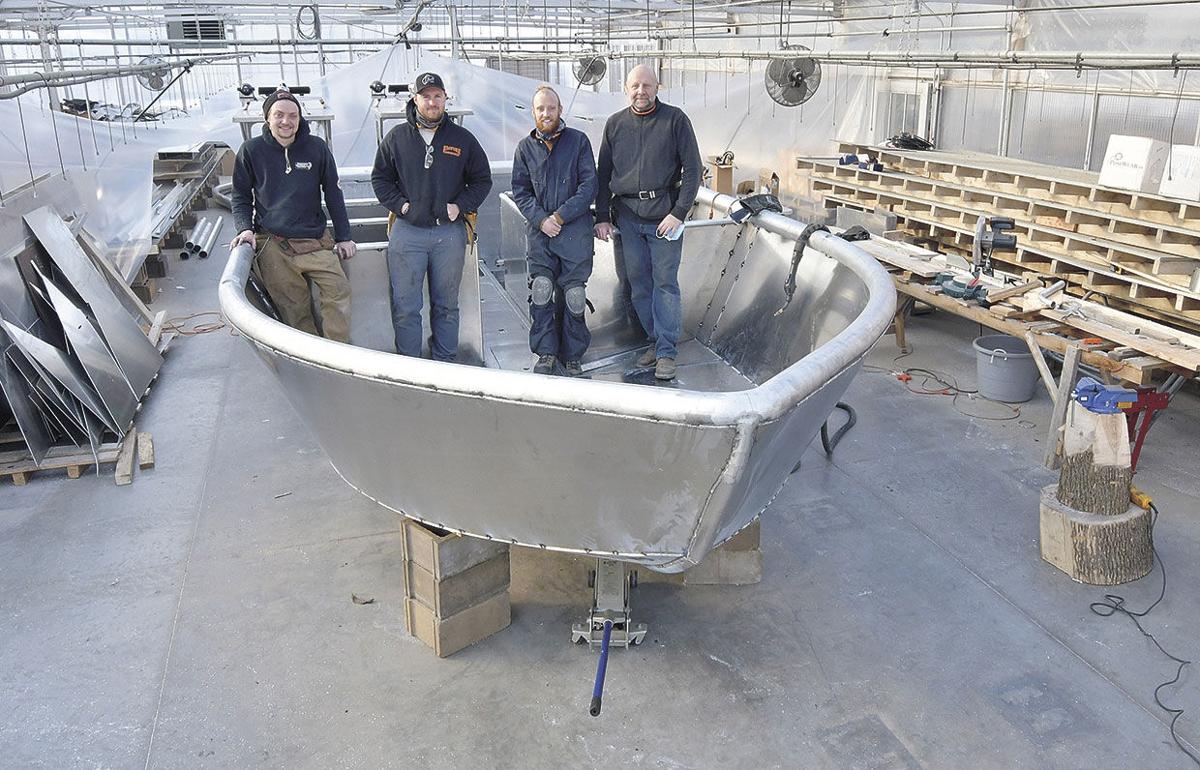 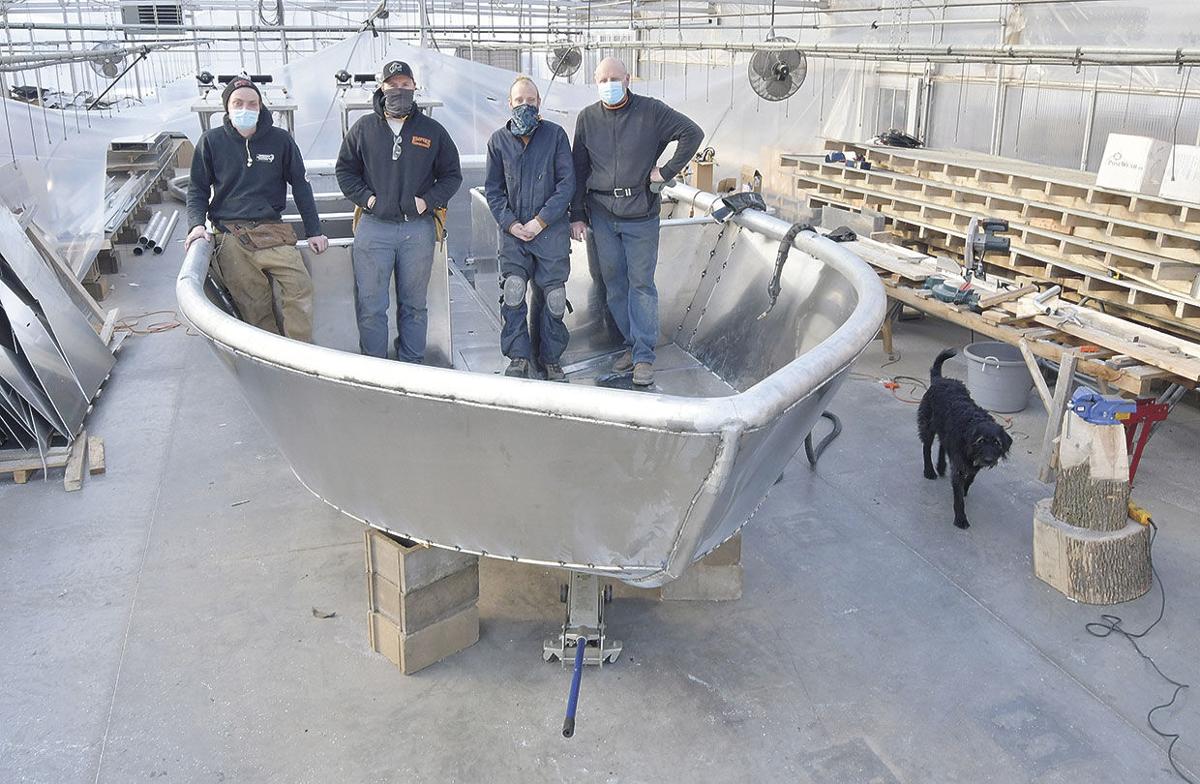 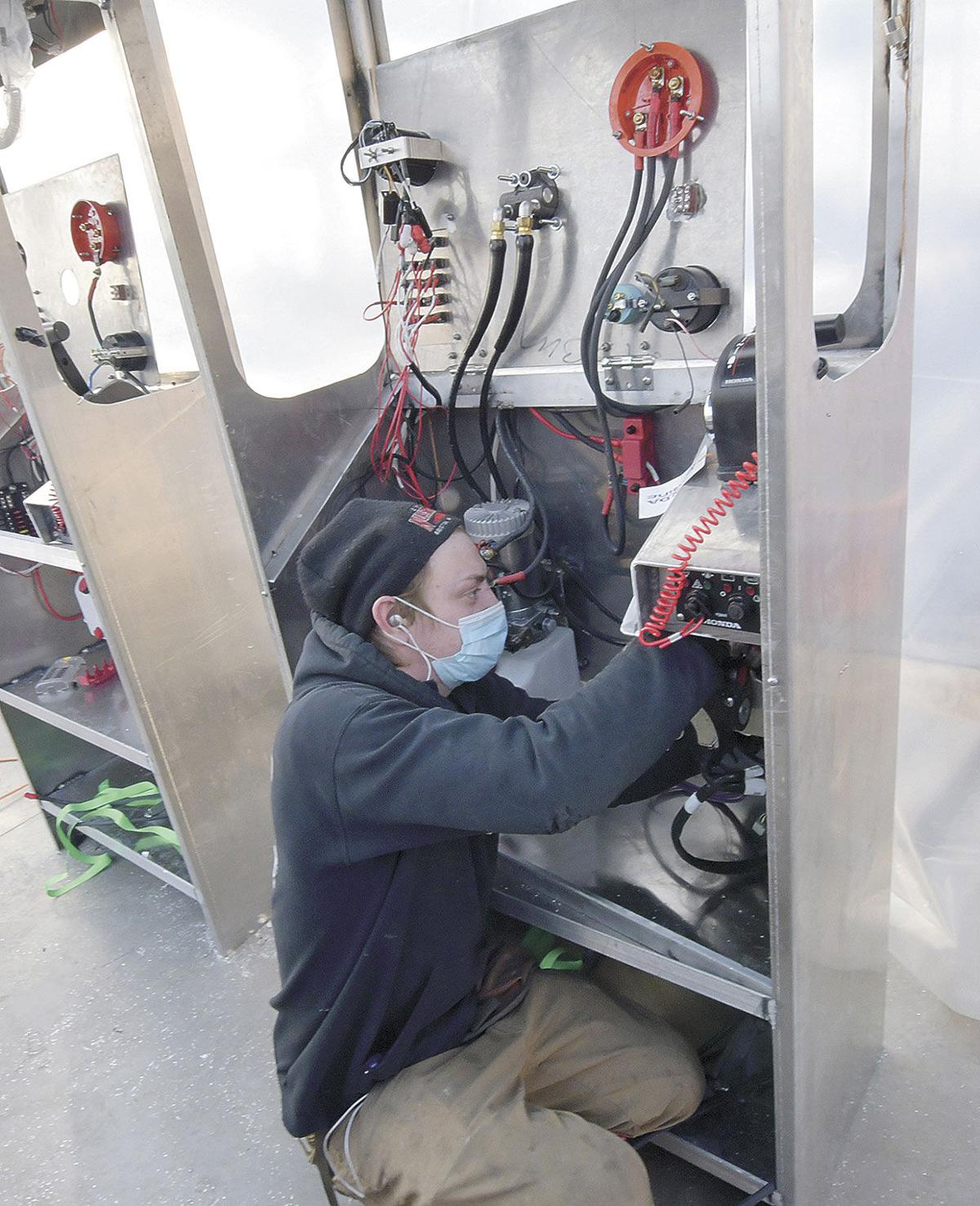 Taylor Barhan works on the wiring in one of the helm control units. 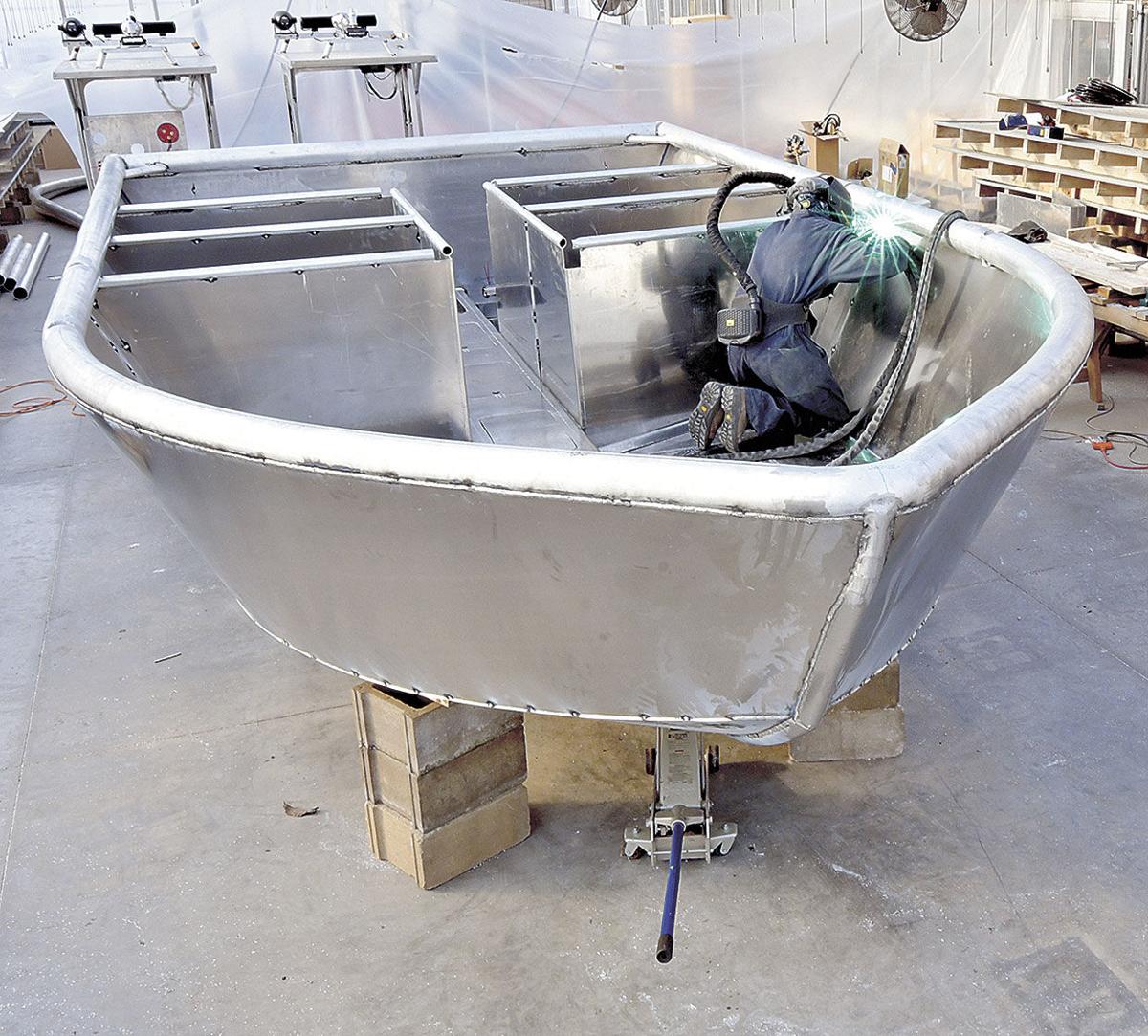 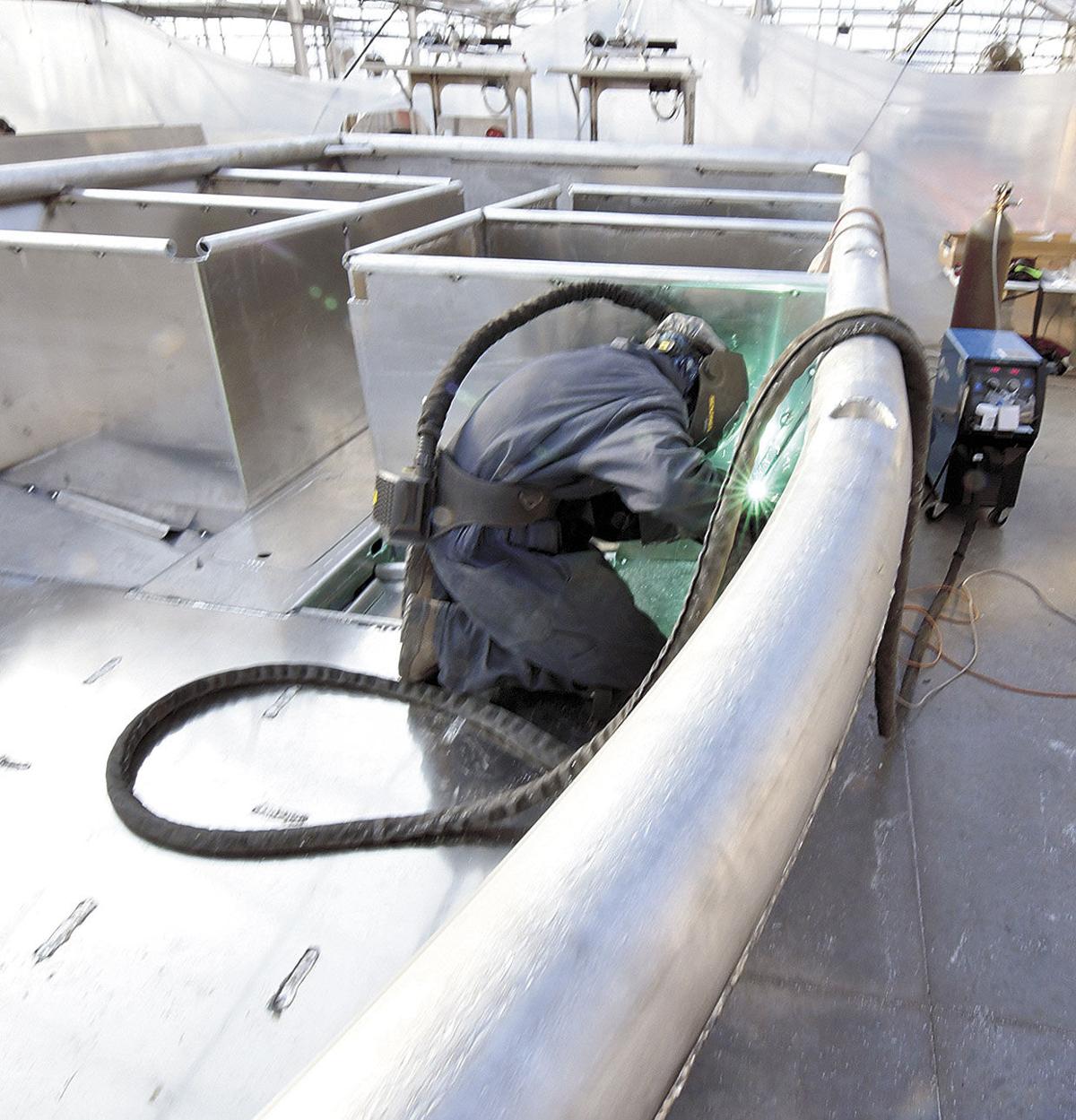 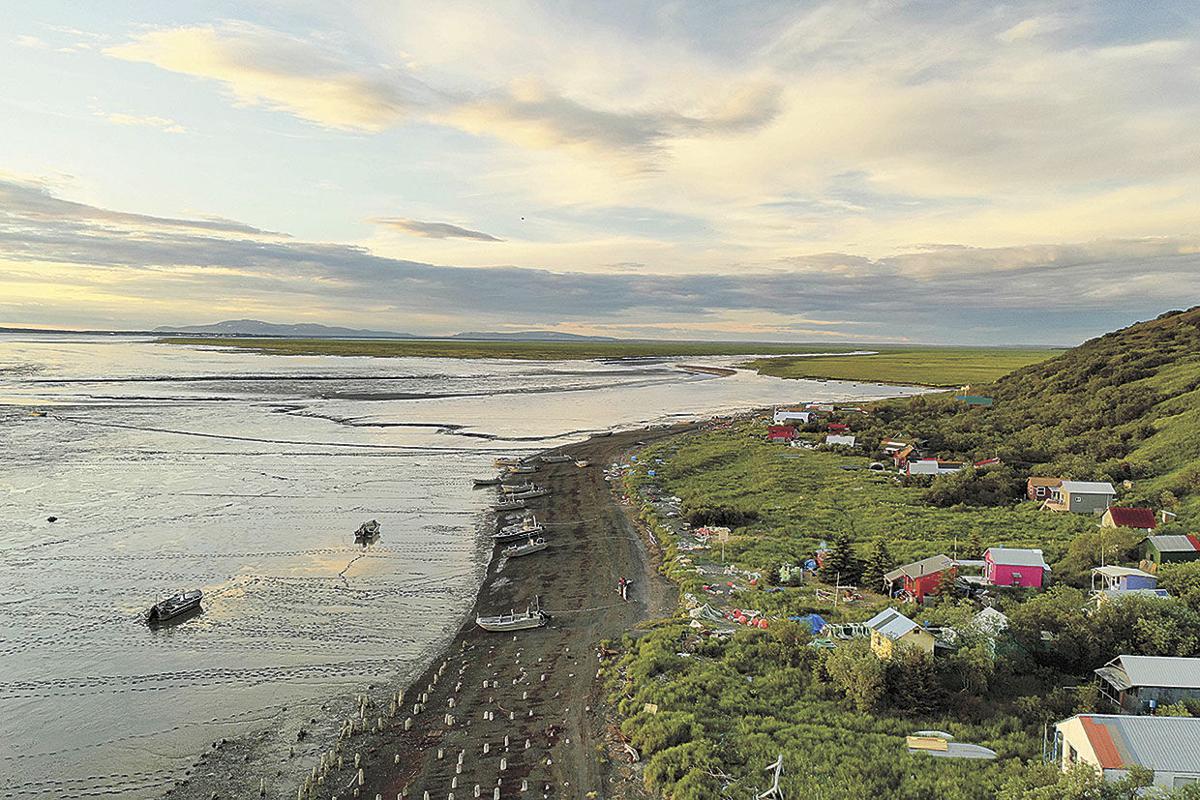 Jason Leichtenberg provided an aerial photo of their fishing camp on Nushagak Bay in southwest Alaska. 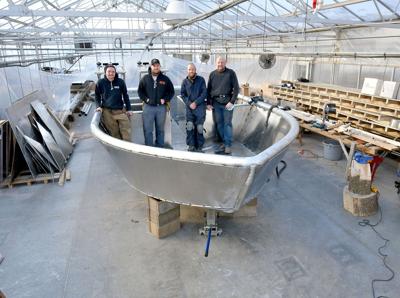 Dave Barhan works on an aluminum pipe fitting in the boatbuilding shop that is temporarily housed in the greenhouse.

Taylor Barhan works on the wiring in one of the helm control units.

Jason Leichtenberg provided an aerial photo of their fishing camp on Nushagak Bay in southwest Alaska.

On his second season of boat building, the retired teacher recalls driving around the area looking for a shed or pole building large enough to construct a 28-foot commercial fishing skiff. He spied the greenhouses behind the florist and thought it the perfect place.

Owner John Birkeland was skeptical at first, but became a believer when Barhan, his two sons and a fourth fishing partner rolled out the first aluminum boat, dubbed “Big Momma.”

A single dad, Barhan’s two sons Taylor and Adrian had a unique upbringing. As youngsters, they spent carefree summers in a place called Nushagak Bay in southwest Alaska. While Dave was netting salmon 1,000 feet offshore, the brothers learned to be self-sufficient back at camp.

Taylor, for instance, took on kitchen duties. “I was cooking for nine people when I was 9 years old,” he said.

Barhan would get a call over the boat radio: “Dad.”

“Taylor, what do you need?” he’d answer.

“How do you make the crumble topping for apple pie?”

Other fishermen hearing the exchange always kidded Dave about baking from then on.

The boys said they wouldn’t trade the lifestyle they lead, although it has its ups and downs. “We learned a lot of life lessons running around on the beach while dad was out fishing,” Taylor said.

Dave describes fishing camp as “the quintessential village. There is no place to get in trouble. There are no cars to run them over. Everyone knows everyone. I knew they’d be OK.”

A chemistry and physics teacher at Mounds View High School for 21 years, Barhan has spent summers fishing sockeye salmon in the pristine bay June through August for 23 years. He was hooked when he accompanied a teaching friend to Alaska one summer to crew for a Norwegian, aptly named Ole.

The watershed draining into Bristol Bay consists of 10 river systems that claim the largest remaining wild sockeye run in the world. Nushagak Bay is a large estuary that opens to Bristol Bay in the Bering Sea. “Last year’s overall run was about 58 million fish,” according to Barhan.

Every fisherman holds a shore fishery lease, tightly regulated by the state. Alaska salmon is totally sustainable, he said. “Each river system has a counting tower and a biologist who runs it. They call it an escapement. They know exactly how many fish go upstream to spawn. If they require 15,000 fish at the tower and count only 10,000, they don’t let us fish. They ensure spawners get upriver. Once that happens, we can fish.”

The three Barhan family members and friend Jason Lichtenberg all hold permits. Their annual target is 50,000 pounds per permit.

Fishing success fluctuates, Barhan said. “Some years it’s a paid vacation, and some years quite a lucrative venture.”

Their camp consists of four 12x16 plywood shacks that have no insulation or studded walls. They have an outhouse, a sauna and enough water pressure to plumb a hot water heater to take showers, do laundry and wash dishes.

There are the occasional bear encounters, but mostly when the camp is deserted. One of the cabins has a perennial patch where a passing grizzly leaves its mark. Seems a corner of the cabin is next to the path, so bears take a bite out of the plywood when walking by. “We gave up trying to repair it,” Barhan said. “They like to let you know they’re there.”

The closest town is Dillingham, 7 miles away and across the bay. About 30 families reside in the fishing village every summer. “If someone needs a cup of sugar, we ‘borrow it over the fence’ kinda thing,” Dave said. The area just got cell service, which he considers “a sad thing.”

“It used to be a great escape,” he explained. “You had to go to town to use a pay phone if you had to call someone.”

The makeup of fishermen calling the village home every summer is an interesting one. “On that beach, you have lawyers and doctors and many with master’s degrees,” Barhan pointed out.

“We live by the tides,” added Taylor. “We don’t care about time.”

Boat building is a recent venture born of necessity. And it’s a good way to spend the winter.

They consider the work fun and challenging. “That’s why I like commercial fishing,” Dave said. “You’re always trying to improve equipment and the way you catch fish.”

Once their fleet is complete, they will custom build for other fishermen. Fully rigged with electronics and a 250 horsepower outboard, the boats are worth about $110,000.

They’ve had mishaps in the remote area over the years, but nothing serious. Taylor told of a time their boat almost sank. They were having their annual Thanksgiving dinner in July with friends when a fisherman’s son came running to the cabin to say their boat was in trouble.

Tides in the bay fluctuate 30 feet, so heavier boats must be left floating or they’ll be stranded in mud. One of the boats had been anchored in such a way that waves were crashing over the bow, filling it with water.

“It was sinking. I put my wool socks on and sprinted across the mud,” Taylor recalled. “Everyone came out with buckets to help bail. It was getting dark and the tide was coming in, but we saved the boat. It would have been a big loss.”

Spending summers on the bay has given Dave Barhan a different viewpoint on life. “We learn to appreciate and treasure community,” he said. “It’s an honest lifestyle; crime is rare. No one locks their doors.”

His dad was on his deathbed when he urged Barhan to use his inheritance to buy in to an operation. “So that’s what I did,” said the White Bear Lake resident.

He hopes it will last. The largest salmon run left on the planet is under threat, Barhan said. Last month, Alaska’s Gov. Mike Dunleavy threatened to appeal denial of a permit for the proposed Pebble Mine, an open-pit gold and copper mine that would be situated in the middle of the Bristol Bay fishery. The U.S. Army Corps of Engineers denied a permit for the mine after determining the plan would not comply with the Clean Water Act. If built, the open-pit gold and copper mine would be one of the largest in North America.

Fishermen and tribes in Bristol Bay have been fighting the project for more than a decade. Alaska Public Media reported that the Army Corps will likely uphold its decision to deny the permit.

“The mine will ruin the watershed,” Barhan maintained. “It would be a tremendous loss.”