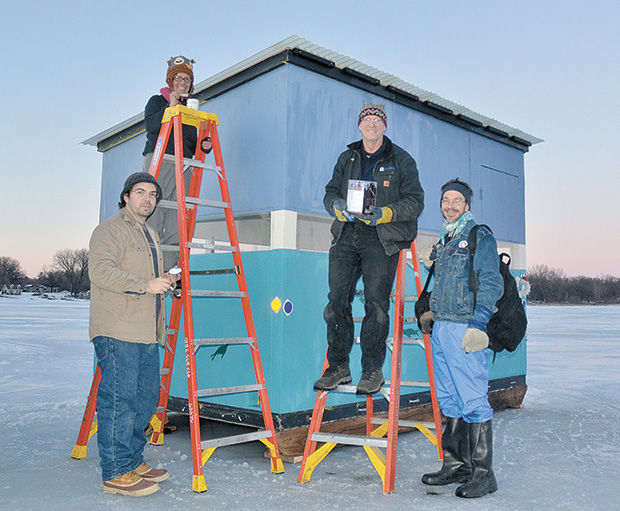 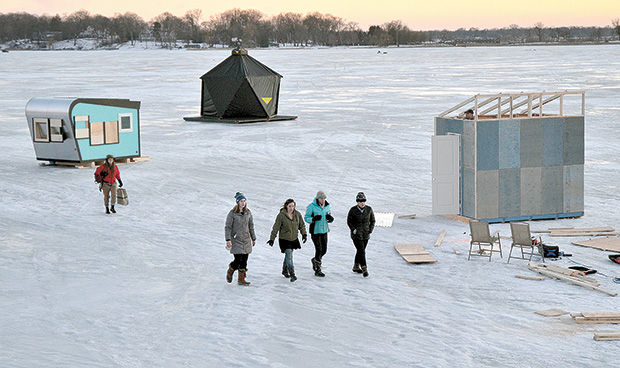 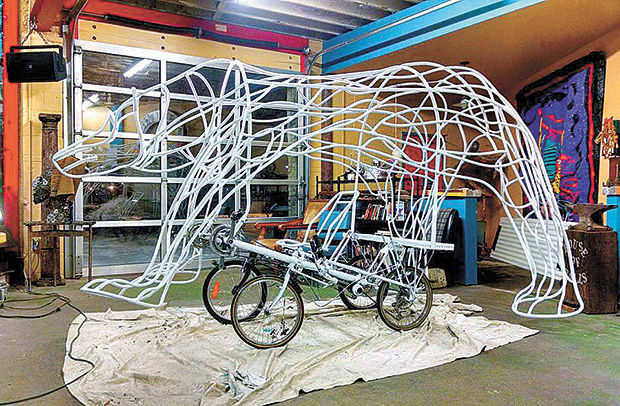 A new pedal-powered polar bear designed and built by Allen Christian will debut this weekend at the Art Shanty Projects. 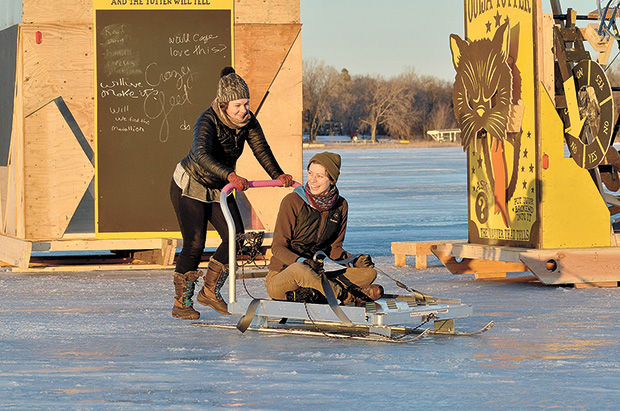 Alex Eninsche and Erin LaVelle take a break from Art Shanty construction with a kick sled ride around the newly constructed village on the ice.

A new pedal-powered polar bear designed and built by Allen Christian will debut this weekend at the Art Shanty Projects.

Alex Eninsche and Erin LaVelle take a break from Art Shanty construction with a kick sled ride around the newly constructed village on the ice.

Soon a tea garden, boiler room, peace train, data lab, giant bed and many more oddities will be ready for visitors on the ice.

After a reorganization hibernation last winter, the Art Shanty Projects is back on White Bear Lake every weekend in February.

The nonprofit-sponsored free event is described as an “interactive, artist-driven temporary community that expands notions of art and artist.”

Nineteen fish-house-inspired “shanties” are one-of-a-kind interactive works of art with a medley of entertaining and educational activities happening inside.

Creative cars and bicycles and performers will also roam the ice each Saturday and Sunday afternoon.

A White Bear Lake architecture firm is a second-time creator of a shanty and the White Bear Center of the Arts is a multifaceted partner in the event that is expected to draw thousands of visitors to White Bear Lake.

Despite frigid temps in 2014, more than 11,000 people came to see the first shanty village to appear on White Bear Lake.

The Art Shanty Projects made its first appearance in 2005 on Medicine Lake in Plymouth. When organizers decided it was time for a new locale, supportive White Bear Center of the Arts and city leaders lured the project to the metro's second-largest lake.

Last winter no shanties appeared on the ice while the organization welcomed a new executive director and artistic director, incorporated as a nonprofit and applied for grants.

According to Executive Director Dawn Bentley, a $100,000 grant from ArtPlace America funded an increase in the stipends given to the selected shanty builders and performing artists and guaranteed that there will be an art shanty town back on White Bear Lake in 2017.

Another grant from VSA Minnesota is supporting efforts to make the Art Shanty Projects more accessible to people with disabilities. Those initiatives include transportation between the county park and the shanty village and audio described village tours for people with visual impairments on Feb. 20 and tours with an ASL interpreter on Feb. 21.

Visitors will have to admire NewStudio Architecture's shanty from the outside. It's a tiny 8-by-8-foot structure that project leaders Adam Jarvi and Sean Wagner from the White Bear Lake architecture firm have dubbed the The Box Studio. Artists recruited by the arts center will take turns creating masterpieces inside the heated box. Many windows, including a corner of the structure composed only of glass, will allow outsiders to watch the artists work and will give the artists an 180-degree view of the lake.

The shanty is designed to be easily towable in hopes it will continue to be used as a mobile retreat for artists long after the art shanties come off the lake.

“We wanted to make something reusable this year,” Jarvi said. How exactly The Box Studio will be put to reuse is still to be determined.

Inside a shanty sponsored by members of the arts center, visitors will discover that they don't quite pronounce “Mahtomedi” correctly.  Interactive displays will educate about the language of the Dakota people, according to Mary Jane LaVigne, one of the shanty's creators.

Visitors will learn how the native language inspired the names of many cities across Minnesota and with the push of a button can hear a recording of each city's name being pronounced by members of the Minneapolis American Indian Center Dakota Language Roundtable.

The 12-foot tall pedal bear (a bear sculpture attached to a multi-person bicycle made by volunteers with arts center ties) will also be back on the ice with a fuller coat (made from recycled plastic).

A new 5-foot-tall bear cub will also roam the ice this year. Allen Christian created the cub sculpture atop a two-person bike donated by Jim Muellner of Just Two Bikes. A new pedicab that resembles a seal, created by arts center instructor Peter Schulze, will also give rides.

This year's rotating group of performers will include dancers, musicians, poets, fortune tellers and more. Other special activities include an opening day “sparkle parade” hosted by the White Bear Center of the Arts, Sunday ArtCar and ArtBikes parades, a scavenger hunt and a fat-bike ride around the lake. See artshantyprojects.org for a schedule.

Bentley encouraged locals to come visit the shanty town more than once to catch the special events and varied performances.

“Each day will be a completely different experience,” she said.

Where: On White Bear Lake near Ramsey County Park. Parking is available at the park, 5050 Lake Ave.

• White Bear Center for the Arts sparkle parade and open house on Feb. 6. Show up at the beach at 1 p.m. with a sled covered in tinfoil and/or wearing everything shiny you can find and parade around before checking out the shanties. When you get cold, head on over to the arts center to check out the exhibits, do an art project or two, listen to music from Jazz Savvy and have some pizza and other treats.

• Family weekend Feb. 13 and 14 with an abundance of kid-friendly performers and exhibits

• All-access weekend Feb. 20 to 21 with rides out to the shanties, hourly audio described tours on Saturday and ASL interpreter tours on Sunday.