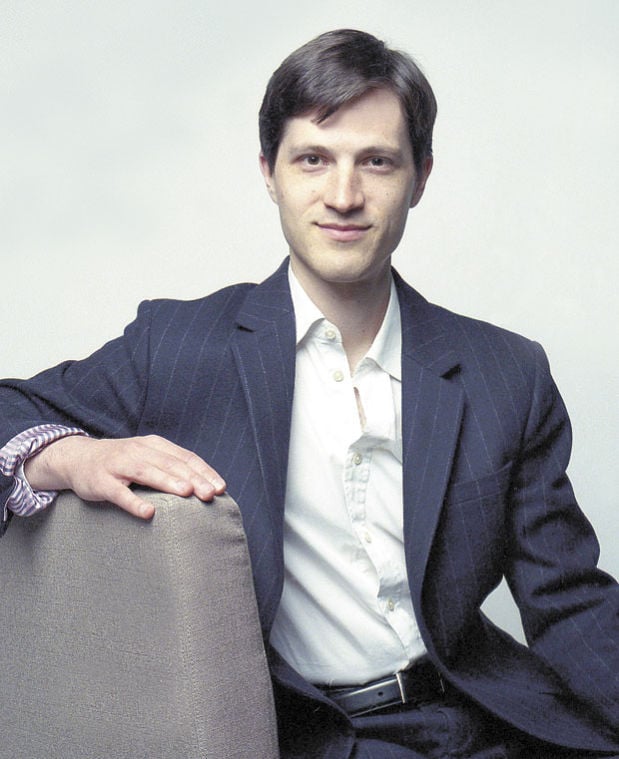 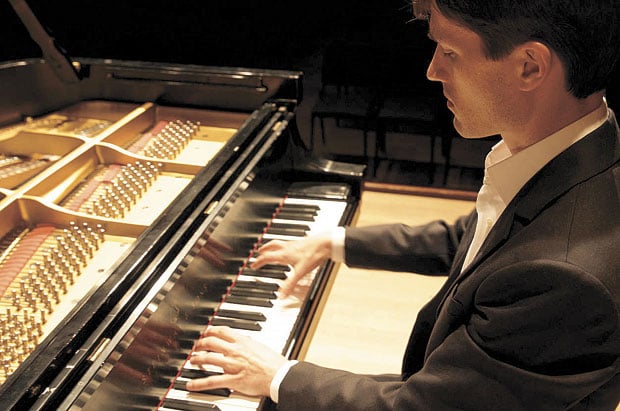 As a composer and pianist, Michael Djupstrom has received numerous accolades, recently from the Pew Center for Arts and Heritage. — Submitted

As a composer and pianist, Michael Djupstrom has received numerous accolades, recently from the Pew Center for Arts and Heritage. — Submitted

You might think that composer Michael Djupstrom has a somewhat unorthodox evening routine for a musician.

“I put an embargo on music. I don’t want to hear music,” said Djupstrom, a 1998 graduate of White Bear Lake Area High School. “I will most likely have come from practicing or composing and it’s in my head all the time. So I turn off the music. Literally.”

But it’s an approach that has worked for the 33-year-old, who was awarded one of a dozen $60,000 fellowships from the Pew Center for Arts and Heritage in Philadelphia, where Djupstrom now lives, in June.

The recognition is the latest in a string of awards, grants and prizes from institutions as varied as the American Academy of Arts and Letters, Music Teachers National Association, Chinese Fine Arts Society and Académie musicale de Villecroze.

Djupstrom himself is pragmatic about the success he has experienced of late. “When I was a student, I was frequently applying for awards,” he said. “I thought it was what you needed to do to get into graduate school. Sometimes I won and more often I didn’t ... I started to realize that recognition is incidental to the artistic practice. They go hand in hand if things are going well, but there was a period when I didn’t go out of my way to apply for anything at all.”

It was a nomination from the great contemporary French composer Betsy Jolas for an emerging composer award that persuaded Djupstrom to set aside his disillusionment with the classical music world’s recognition.

Djupstrom had spent a number of months over 2007 and 2008 first as composition student and then assistant to Jolas in Paris and Villecroze, France, and learned she had nominated him for the Charles Ives Fellowship from the American Academy of Arts and Letters.

At the academy’s award ceremony in 2010, which also rewarded outstanding practice in other arts, Djupstrom had somewhat of an epiphany as he looked around and recognized many great living American composers, sculptors and writers.

“Even more important to me than the idea of being able to ‘connect’ with all the artists present was the simple fact of seeing so much artistic weight gathered in one place,” he said. “It was an inspiring experience to be recognized as part of such an artistic community. Before this, I’m not sure I’d really considered how awards and accolades could have a value beyond a check and fleshing out a résumé.”

Although Djupstrom may be modest about the recognition he has received, his parents Robert and Ann Djupstrom are a little more outspoken about his success. They live in the same home in Cranbrook Drive behind Sunrise Middle School in which Djupstrom spent his childhood.

Michael Djupstrom laughs that his father was joyfully broadcasting the news about the recent Pew Center fellowship to strangers attending his garage sale held shortly after the announcement.

Sharing the news with his parents was something Djupstrom had to hold back on longer than he would have liked. He found out in late May that he had been selected to receive the $60,000 fellowship — and could not wait to tell his family when he was back in White Bear Lake in June.

“But I wasn’t allowed to tell anybody,” said Djupstrom. “The day after I got back from Minnesota was the awards ceremony and so I really wanted to tell them while I was there, but I couldn’t tell anyone — and I kept my word! My father is the most unashamed promoter of his children and so I knew he would tell everyone.”

Robert Djupstrom feels he has a duty to tell others about his son’s achievements.

“Michael’s not one to toot his own horn,” he said. “I’ve told him for years, ‘If you are really going to get the acknowledgement that a person deserves, you need to toot your own horn a bit because other people get busy and they won’t follow your career,’ but he is an extremely modest person.”

That modest attitude was evident from a young age, according to Robert Djupstrom’s stories about his son. He recalls Djupstrom’s first piano teacher, Lillian Rosten, who taught Djupstrom in half-hour lessons costing $3.

“After a few years, she said she really couldn’t teach him anything more because he was so far advanced,” recalled Robert Djupstrom. “But Mike said he did not want to do that because he enjoyed going over there to play, and talking with her.”

Similarly, when Djupstrom taught himself to play the oboe and achieved such a high standard that his band teacher talked about offering him the first chair in the band, Djupstrom declined. He took second chair because he was good friends with the first chair oboe player.

Even Djupstrom’s decision to pursue music seriously at college was left until last minute and he had to be reassured by his parents that they were fully in support of his enrollment in the music program at the University of Michigan.

The Pew Center for Arts and Heritage has a rigorous process for selecting fellowship recipients. Djupstrom came through a nomination round with 60 other nominees, two panels of judges, review of his musical composition and philosophical approach to his composing in the form of a number of essays.

One aspect of Djupstrom’s work that was highlighted by the Pew Center for Arts and Heritage fellowship panel was his dedication to creating pieces of classical music that appeal to 21st-century audiences.

“We are trying to identify the most talented artists in the region and support them,” said Melissa Franklin, director of Pew Fellowships for the Pew Center. “Michael was really concerned with connecting to audiences and it was something that the evaluators and the panel found very admirable. He is not making work simply for the concern of experimenting or creating something novel. He is creating something that he hopes will be cherished now and into the future, and he is really focused on the audience members. I think that is somewhat singular in Michael’s approach to work, in that he is so focused on the audience.”

For Djupstrom, it’s a simple choice. He feels that many modern composers have been so focused on academic experimentation in their music that they have alienated their audiences.

“In my experience, there are two kinds of concerts at which new composers get programmed,” he said. “There are new music concerts full of new music, played by performers who are used to playing new music pieces and attended by a small group of people. Then there are the types of concert that are more interesting to me, when your [modern] piece gets sandwiched between, say, Beethoven and Brahms ... People have learned from experience that they are going to dislike the new piece, so when they come up to me after the concert and say, ‘I actually really liked your work,’ it is really gratifying to me.”

Djupstrom tries to dodge the question of how he would describe his own music, but when pressed, comes up with a written description: “I try to write music that is as alive and unpredictably dramatic as any human personality. I see my work as an extension of the Western classical heritage, and I draw upon both traditional and contemporary styles of musical expression in an attempt to give voice to the thoughts and feelings that lie inside each of us but are not so easily verbalized or articulated.”

Three hundred-odd years after Beethoven, Mozart and their contemporaries were making a living through composing, it can be hard to imagine a classical composer making a living in the 2014 world of Netflix, iTunes and Pandora.

For Djupstrom, talent as a pianist has enabled him to supplement his work as a composer with performance and accompanist opportunities. With those opportunities come additional demands, such as rigorous practice to stay on top form for concerts, but that, says Djupstrom, is partly what keeps his love of his chosen vocation alive.

“There will be a deadline for a commission coming up, and so I will focus on that, and then the next few months will be full of performance commitments so I will practice furiously because I can tell I’m rusty when I go back to it,” said Djupstrom. “It’s probably not the best model for maintaining technique, but it’s a good model for me because it keeps the spark and the love for it. Otherwise, it will become like any job.”