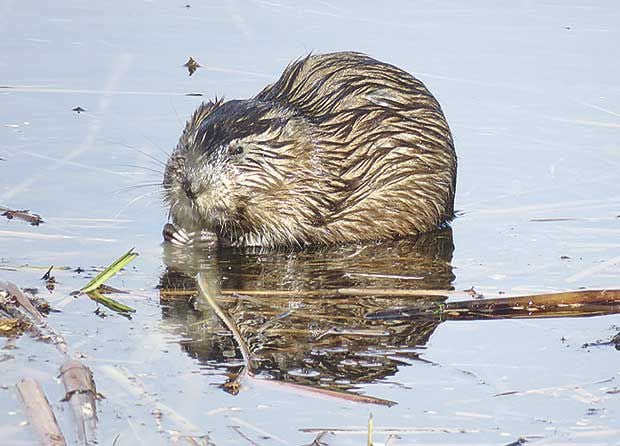 A muskrat at the Birch Lake Rotary Nature Preserve. 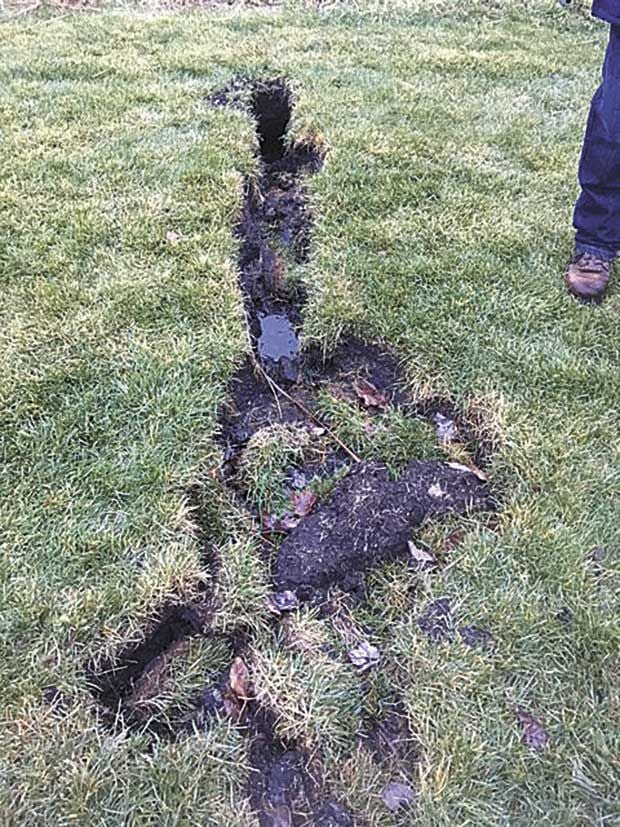 Muskrat tunneling can do a lot of damage to nearby yards.

A muskrat at the Birch Lake Rotary Nature Preserve.

Muskrat tunneling can do a lot of damage to nearby yards.

WHITE BEAR LAKE — In many ways, muskrats aren't much different from “Star Trek’s” tribbles — both are cute, furry creatures that multiply quickly and overwhelm their environment. But while the U.S.S. Enterprise contends with tribbles in fiction, cities in the northeast metro are dealing with the problem of rapid muskrat proliferation in real life.

Mostly nocturnal, muskrats are aquatic rodents that live in marshy wetland areas. They build small huts out of reeds and cattails, which also serve as a food source. This spring, many residents have noticed that there seem to be more muskrats than usual, and that they are becoming a nuisance.

Muskrat activity is highly visible at the Rotary Nature Preserve near Birch Lake. President of the Birch Lake Improvement District (BLID) Dale Bacon said that the muskrats have been in the area for a long time because the park is natural habitat for them.

“A couple of issues have come up in the last few years,” he said. “The population seemed to explode, and whether it's linked or not, most of the cattails around the lake have disappeared. (Cattails are) part of the forage food of muskrat.”

Andy Shoemaker, a May Township resident, has been trapping muskrats and other wildlife for more than 40 years. He said that the muskrat population is at one of the highest levels he's ever seen.

Shoemaker credits wildlife management with the resurgence in many types of animals — he remembers a time when he was limited to only 10 beavers because the waters were not as clean and the animals were not as common.

Conservation efforts have led to an environment that is perfect for the proliferation of birds of prey, waterfowl, deer, beaver and many other species, but right along with them come muskrats. Bacon said that the high water quality in Birch Lake is likely one of the many reasons the population has increased. Lake levels have also played a role.

“What's really changed the last few years are low water level conditions, and that allowed weeds and willows and cattails to start growing on flat areas exposed with the loss of water,” Shoemaker said. “The lake came up last year quite a bit, and all those areas that had weeds and cattails growing, those are places that for many years had no aquatic vegetation. The water came up and it provided habitat for muskrat.”

In addition to creating these homes in the shallow water, muskrats burrow underground to create a warm, protected chamber where they can bring back food collected from under the ice in winter. One of the biggest concerns is that the rodents' tunneling will eventually destabilize the infrastructure of the bank and nearby roads.

“The concern on the part of the city was that they were starting to undercut the bank on Birch Lake Boulevard,” Bacon said. “You start to get things washing away. A number of shoreline property owners have complained about burrowing under their property; holes pop up.”

Gary Langer is a resident of the Wild Marsh townhouse development on Marsh Drive in White Bear Township. He and his neighbors have noticed quite a bit of tunneling in their yards; he said his neighbor has a hole in his lawn about two feet deep and eight feet long. Langer has lived in the home for three years, and said the problem has gotten worse.

“We love the marsh and the wildlife in it, except for that one creature,” he said.

The muskrat population spike may also be related to a White Bear Lake ordinance passed in 2013. When a local man's dog was accidentally caught in a raccoon trap, the city passed an ordinance stating that all trapping was prohibited, except for with permission of the city manager or by request of a private property owner. Homeowners like Langer are able to take care of the problem in their own yards by requesting these services, but trappers are not allowed to operate the way they would on other lakes. Most lakes that fall under the jurisdiction of the Department of Natural Resources (DNR) are open to trapping, so long as the trappers have the proper permits and only take game during the active trapping season.

Muskrats do have some natural predators, Shoemaker said. Eagles, hawks, otters, mink and even muskies will feast on muskrat when given the chance. That's why the high rate of reproduction plays such a critical role. Although muskrats usually live hardly more than a year, Shoemaker said they can have up to four litters of young over the course of one summer.

“A muskrat born in spring can have its own litter of babies by fall,” Shoemaker said. “That's what happened in White Bear Lake. The circumstances are just perfect. For years there were no weeds or cattails, but with the lake dropping and then coming back up, there's a lot of habitat.”

Muskrats can present a danger to humans and pets, Shoemaker said. They may carry diseases, such as tularemia or, in the rare case, rabies. In addition to this, their behavior changes in the breeding season.

“Muskrats can be quite aggressive, especially in springtime when they're most active and breeding,” Shoemaker said. “This is the only time of year you see them hit by cars. They migrate across dry land, looking for a new watershed, new lakes, new ponds to go through. When that ice first comes out, there seem to be muskrats everywhere. They end up in garages and window wells, but that only happens in spring for a short period of time. In the spring, they can be very aggressive. I've had a number of dogs bitten by muskrats. They have very sharp teeth. The dangers are if... a kid wouldn't know any better than to (approach). The rest of the year (muskrats) keep to themselves.”

DNR furbearer specialist Jason Abraham said that the DNR does not formally track muskrat numbers, but that based on anecdotal evidence and observation of muskrat huts in wetlands around the state, it's likely the numbers were higher than usual this year. Shoemaker said that a possible solution to the problem would be a renewed interest in trapping among young people; he grew up in White Bear Lake trapping for spare cash.

“What I really think is that it's too bad there's not more kids out there, instead of sitting inside the house playing video games or whatever else,” he said. “You learn about being self-reliant and independent. You go up to Birch Lake, you could easily catch 300 muskrats. Three hundred muskrats at $3 a piece, for a kid that's in high school, that's a nice bit of change. On top of that, people don't really know anything about trapping anymore. You outlaw the trapping, these critters become problems.”

Both Shoemaker and Abraham said that overpopulation and the natural fluctuation in water levels may eventually lead to a natural solution to the muskrat problem.

“Their populations cycle from high and dense to low and sparse very quickly,” Abraham said. “It’s quite possible that muskrat populations will (be) noticeably lower in the near future.”

Jackie Bussjaeger can be reached at 651-407-1229 or lowdownnews@presspubs.com.

Look up the word "creature."
.
We choose how we look at nature. The 4/5/2017 article "Little Creatures Create Big Problem in Local Lakes" seems determined to judge it according to its inconvenience.
.
Alternatives include a nice Wikipedia article about muskrats and a Natue365 video (April 2) showing a muskrat living its part in the "Big Woods Awakening".
.
The City of White Bear Lake doesn't limit the use of cage or colony traps for muskrat trapping, and it still allows more dangerous traps as necessary in response to wildlife-management concerns (Municipal Code 702.044). It leaves the choice up to us, how we choose to look at nature.
.
Trapping doesn't solve all our problems. We need to be safe in the outdoors, with mosquito repellent, clothing and tips to avoid ticks, and common sense to keep our distance from wildlife. The same goes for our pets, plus vaccinations. It would be foolish to trust that everything will be all right "as long as trappers are out"--and trying to sell their higher-grade pelts for gas money.
.
We can and do appreciate muskrats and their place in nature. We watch them nibble on vegetation, and see the resulting, cropped cattails as a positive. We rip-rap sensitive shorelines and fill in collapsed burrows. We look up the word "creatures," (in the dictionary, the encyclopedia, the Bible) and see how much more nature is than an inconvenience.