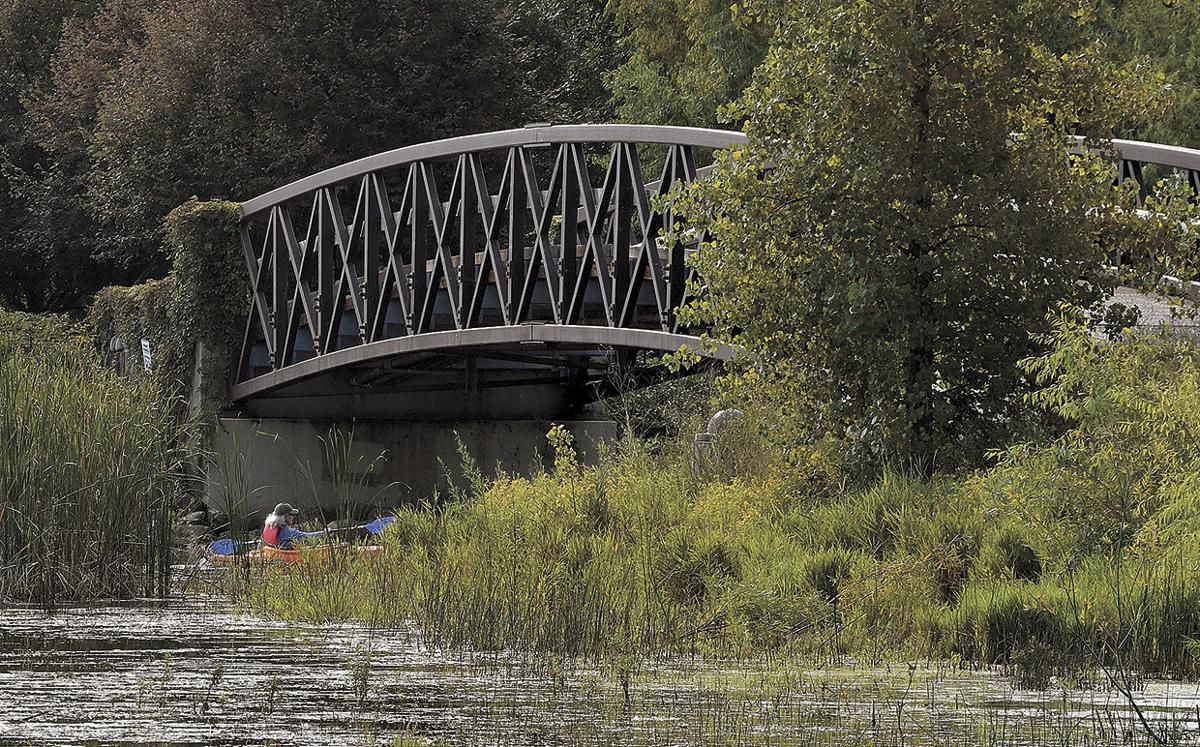 A kayaker passes under the Manitou Island bridge on Friday, Sept. 1. Rising lake levels allow limited boat traffic to once again travel under the bridge, which at one time was impassable. 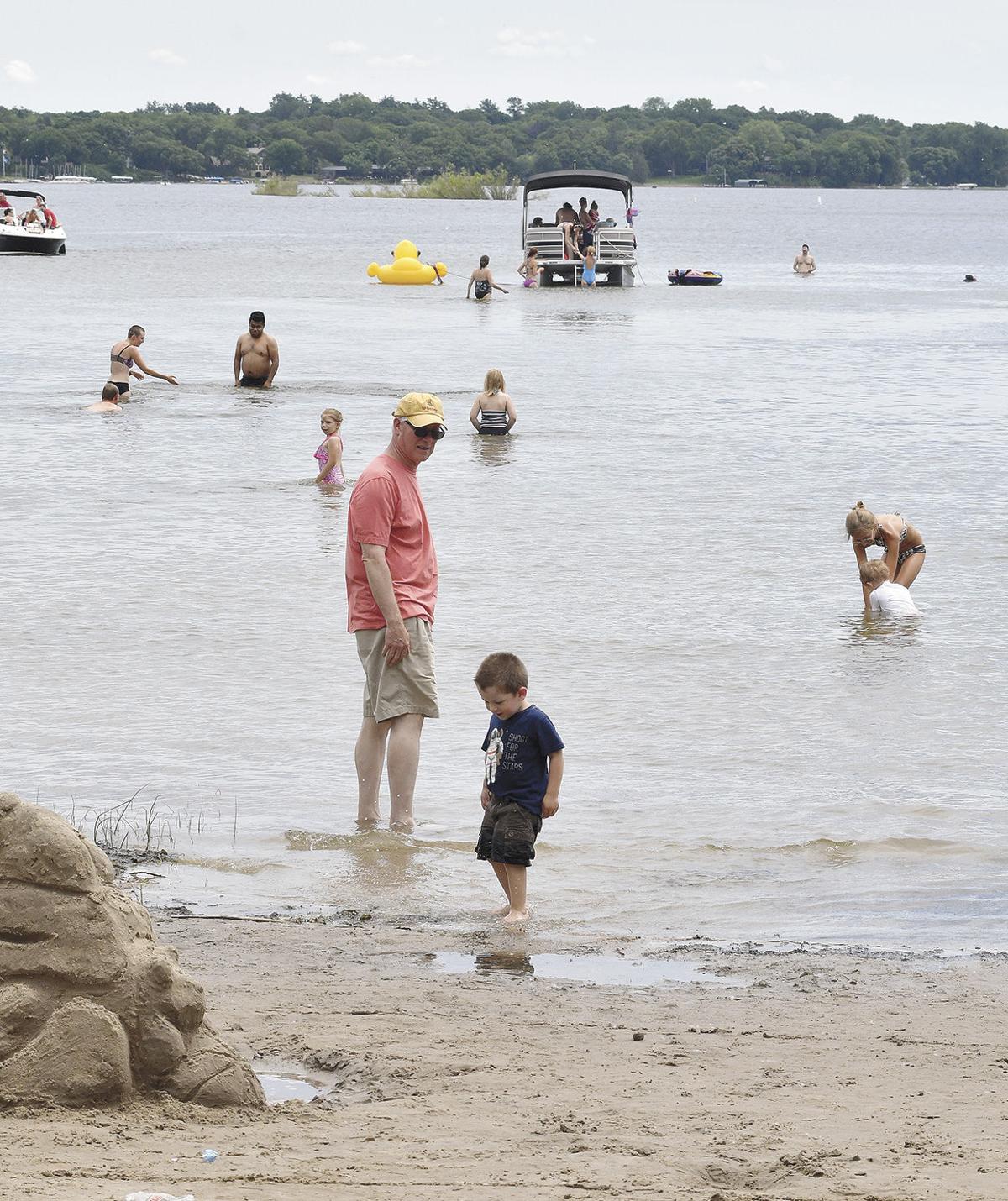 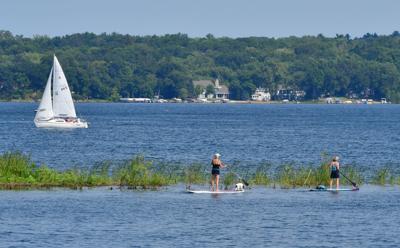 A kayaker passes under the Manitou Island bridge on Friday, Sept. 1. Rising lake levels allow limited boat traffic to once again travel under the bridge, which at one time was impassable.

After five sometimes wet — sometimes dry — years, the lake level lawsuit is over.

In her last case before retiring Aug. 31, District Court Judge Margaret Marrinan ruled that the DNR's current and planned permitting of high-capacity wells and management of White Bear Lake and the Prairie du Chien-Jordan aquifer violated both the Minnesota Environmental Rights Act (MERA) and the public trust.

The DNR's conduct, the judge decided, has impaired White Bear Lake and its underlying aquifer by allowing excessive pumping, all the while knowing the withdrawals were not sustainable.

A member of the plaintiff's legal team, Katie Crosby Lehmann, used the word “ecstatic” to describe their reaction to Marrinan's decision, signed Aug. 30.

“Our clients took on their civic duty to force the DNR to follow Minnesota's environmental laws,” noted Lehmann, founder and managing partner with Ciresi Conlin LLP. “Their actions help ensure sustainable water for all citizens and businesses drawing water from one of our primary aquifers, the Prairie du Chien-Jordan.”

The 140-page decision came five months after the close of the non-jury trial March 29. Over and over throughout the document, the judge emphasized the strong connection between groundwater pumping, the lake and the aquifer.

“Groundwater use by northeast metro communities is not sustainable and that conclusion is indisputable,” Marrinan wrote. She cited Metropolitan Council projections that groundwater use will increase by at least another 30 to 56 percent by 2040 and accused the DNR of engaging in permitting practices that ignore those projections.

Only the DNR has statutory authority to issue, modify or amend permits for groundwater appropriations.

“The DNR did not consider the cumulative impact of its permitting decisions and has not re-opened, amended or right-sized municipal permits,” noted Marrinan. “Groundwater appropriations are having and will have a negative impact on White Bear Lake.”

The judge didn't buy arguments that fluctuations in White Bear Lake were normal. She maintained that the lake's ability to rebound following wet years had lately “differed dramatically from its previous history; a phenomenon that cannot be explained by climate alone.”

An emotional Greg McNeely said he couldn't be more pleased with the decision.

As head of the White Bear Lake Restoration Association that brought the suit, McNeely said the order addressed all their concerns. “It was everything we hoped,” he said. “It's quite a win.”

A statement issued by the DNR shortly after release of the ruling stated the agency was “deeply surprised and disappointed in the Court's order and its implications for citizens and communities in the area.”

The agency noted it needs time to complete a review of the opinion and to understand its implications. That includes taking any possible next steps.

White Bear Lake City Manager Ellen Richter offered similar comment following release of the decision. The city was an intervenor in the case on the side of the DNR.

“Suffice it to say there is a lot in the 140-page document to review and dissect,” Richter said. “Certainly the implications of her ruling are significant at both the local and state level. If the watering restrictions outlined in her decision had been in place a decade ago (see sidebar), a ban on all irrigation would have been imposed in 2006 and still be in place today. This is just one of many implications that need to be considered as we evaluate next steps.”

The city's retired former attorney, Roger Jensen, pointed out that the city already meets criteria for per-capita consumption ordered by the judge. “White Bear Lake is significantly below that number so there will be no direct impact on the city,” he said. Jensen served the city during the litigation years.

“Also worth noting, when this lawsuit started the remedy plaintiffs were seeking was to have wells shut down, particularly the city's wells,” added Jensen. “The judge did not order those, which was the primary rationale for the city entering the lawsuit. The case changed dramatically from the remedy plaintiffs were seeking. One might attribute that to the city's intervention, but we'll never know that.”

Another area where the city prevailed, noted the former White Bear counsel, was an opposition to augmentation with river water. “The judge absolutely rejected that in her decision,” Jensen said.

He was surprised that the judge cited a violation of the Public Trust Doctrine in her order.

The state doctrine holds that natural resources like water are for public use and that the government must protect them as such. The DNR violated the doctrine, Marrinan wrote, by causing a decline in levels of both the aquifer and the lake, diminishing the size of the lake, impacting public uses and for failing to take remedial measures within its authority.

“Minnesota courts have not adopted the doctrine,” Jensen pointed out. “She has adopted it without any precedent in the state. That might be a concern the DNR might have, but that's their call. She could have imposed the same remedy without imposing the doctrine.”

Plaintiff attorney Richard Allyn felt his clients had to face “numerous hurdles and nay-sayers” over the course of the lawsuit. He described the ruling as a “carefully written” opinion and order that “provides a balanced remedy for the long-term threat to lakes like White Bear Lake.

“It requires the DNR commissioner to take measures that, while they may not be politically popular with local politicians, will better ensure the survival of the northeast metro lake and groundwater natural resources.”

As for McNeely, it's a vindication that ordinary citizens can accomplish big things.

“We worked as a team with our attorneys, who did this pro bono, and it's a satisfied feeling to get a favorable judgment,” said the Dellwood resident. “We all believed in the same environmental cause to make a change. The court system worked to protect a natural resource. When it stops raining, there's no question, the lake will go down.”

In her decision, District Judge Margaret Marrinan ordered the following:

The review must be completed within one year and results published in a public newspaper. If any of the permits do not comply with a statutory sustainability standard, they will be reopened and downsized within six months.

If the lake drops below that elevation, a residential ban on irrigation will take effect and continue until the lake reaches 924 feet. The ban must be enforced.

• All existing permits must include an enforceable plan to “phase down” per-capita residential water use to 75 gallons per day and total use to 90 gallons per day. This must be completed within one year.

• Immediately amend all permits within a 5-mile radius of the lake to require that within one year, permittees submit a contingency plan in their water supply plans for conversion to total or partial supply from surface water sources.

This plan will include a schedule for funding design, construction and conversion to surface water supply.

• The DNR shall issue no groundwater appropriation permits unless it has sufficient hydrologic data to understand the impact on White Bear Lake and the aquifer.

• Water supply plans must include measurable conservation goals. The DNR must take appropriate action on any community out of compliance by downsizing its permit.

• For each day the DNR is out of compliance with the Order, it will be subject to a fine of $1,000 per day.

• Costs are awarded plaintiff and plaintiff/intervenor. That cost estimate is not yet available.