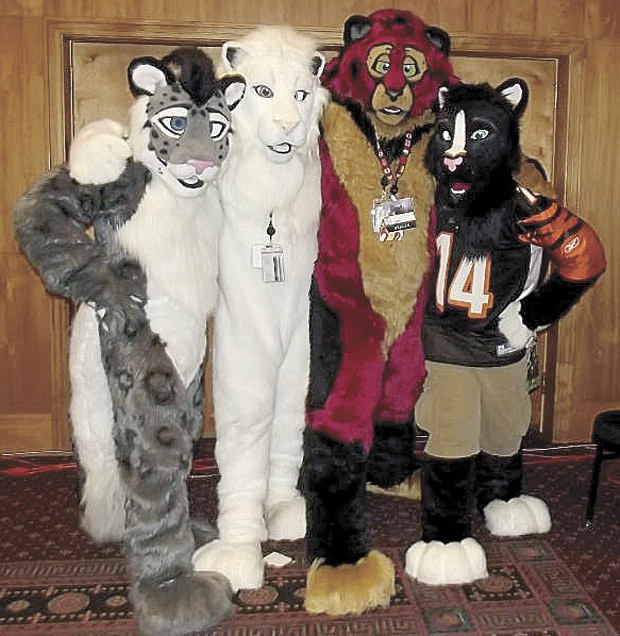 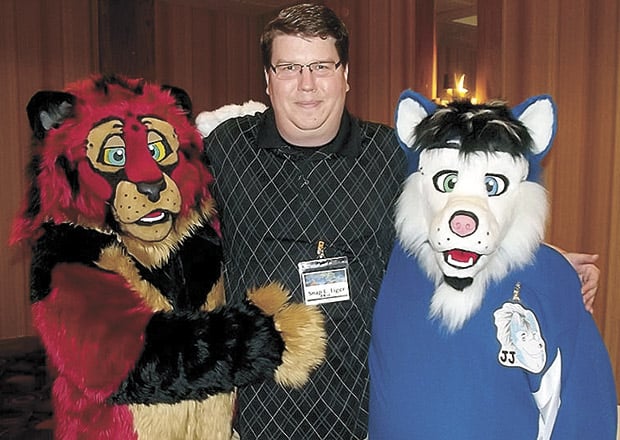 Eric Stevens with two of his furry creations, Doppelkopf and JJ. — Submitted

Eric Stevens with two of his furry creations, Doppelkopf and JJ. — Submitted

Twelve years after he started showing his own stripes, Eric Stevens is helping other furries exhibit their inner feline.

The Nebraska native moved to White Bear Lake this summer as he made his hobby his full-time job. Stevens, known to friends as “Snap E. Tiger,” custom-makes intricate costumes, primarily of tigers, lions and other cats.

Each suit takes 60-90 hours to make and he estimates he’s made more than 75 over the years. He made more than 35 in 2012 and has enough orders to keep him sewing through the end of March. He charges up to $1,800 for a piece of his wearable art.

His cat suits look like something you’d expect to see leading a cheer at a school basketball game. He has indeed made a few school mascots.

But most of his costumes go to individuals who, like himself, wear them just for fun and gather at conventions.

Stevens first discovered the bliss of donning a furry costume when a friend brought a tiger suit to a campout in 1999.

“Putting on this crazy costume helped relieve the tensions of everyday life,” he said. “It was a temporary escape from reality and was fun.”

He soon after bought his own tiger costume. Wanting to add a second suit to his collection the next year but unable to pay the steep cost to have one made, he decided to make one himself.

After a bit of trial and error he discovered a knack for cat costume-making and began making them for friends. It remained a hobby for a decade while he worked day jobs: assistant manager of admissions at the Henry Doorly Zoo and Conservatory in Omaha for five years, then as a Panera Bread delivery driver for a few years and most recently assessing seller fraud complaints for PayPal.com.

When a White Bear Lake friend had a large finished basement available, he decided to move from Omaha this summer and set up a full-time costume-making workshop.

Stevens said he is enjoying the flexible schedule and the freedom of “running things my way.” The greatest challenge of going into business by himself is time management and “keeping on task,” he said.

Now that he’s taken costuming on as a profession, he’s expanding beyond felines. He’s added a poodle, a Bernese Mountain dog and a husky to his résumé, as well as a combination dog and antelope creature. He’s willing to try other critters as well, he said.

His animal heads are built upon martial arts headgear, making them more comfortable and snug, he said. Wearers can even do a cartwheel without losing their head. Another unique feature is shifting eyes that appear to look both forward and to both sides.

The paws, feet and optional body suits are custom-fitted to the future owner.

Purchasers send size information and typically send sketches of what they’d like their animal alter ego to look like.Stevens doesn’t have dreams of mass producing his creations; his niche is hand-made custom suits. “In five years, I see myself doing the same exact thing: Continuing to be successful and being booked months in advance, and hopefully making a bit more (money) per costume in the process.”

Numerous conventions for animal role-playing enthusiasts, often called furries, are held annually across the country. During his years as a hobbyist, Stevens said he attended one or two a year, including serving as a board member and treasurer for a small convention in Alabama.

Stevens plans to set up booths at eight conventions next year. These are where he finds most of his clients. He also has a website, bycats4cats.com.

Stevens isn’t a closeted furry. He appeared in Nebraska media several times and wrote a letter that was published in Vanity Fair magazine. He also was featured in the “Animal Imitators” documentary on The Learning Channel in 2002 and appeared in a “humanimals” episode of “Weird, True and Freaky” on Animal Planet in 2008.

In addition to conventions, he’ll occasionally wear a costume to a party or while taking a stroll through a busy shopping area.

He thinks costumes are a healthy outlet for stress relief.

“When putting on a costume, you are no longer ‘you,’” he said. “You forget about the credit card bills, the dent in your car and how annoying the neighbor’s dog is. Inhibitions are thrown right out the window. Some people cope with life by bowling, remodeling, watching Viking games with friends or having a beer or two. Along with all of those things, I put on mascot costumes.”

Great article featuring a look into a little known but very profitable business. People who have ever wanted a career in making and selling clothes should look to fursuit design, even making cosplay outfits to start out. It's such a niche business that one that make thousands one a single fursuit!