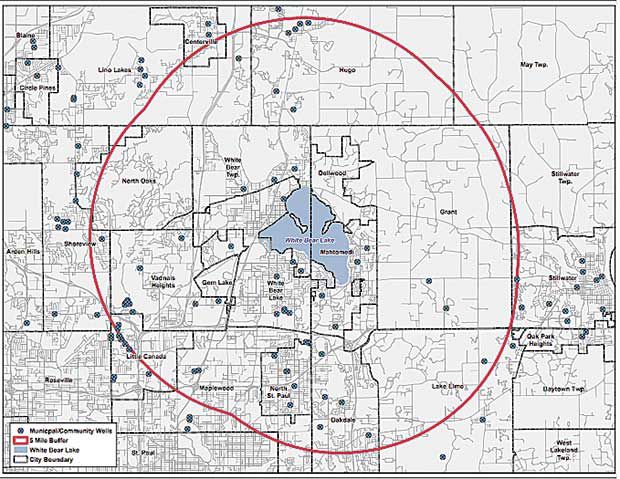 This map provided by the DNR shows municipal wells within a 5-mile radius of White Bear Lake impacted by the judge’s order. Even if a city has only one well within the circle, it is affected.

This map provided by the DNR shows municipal wells within a 5-mile radius of White Bear Lake impacted by the judge’s order. Even if a city has only one well within the circle, it is affected.

WHITE BEAR LAKE — As the court ponders the Department of Natural Resource’s post-trial motions in the lake level lawsuit, municipalities impacted by the judge’s order prepare to comply.

What does that mean for cities and the township within 5 miles of White Bear Lake? Eleven communities attended a meeting mid-month to address those issues and review draft language that will amend municipal permits.

All have at least one well within a 5-mile radius of the lake, the perimeter cited by District Judge Margaret Marrinan in her Aug. 30 order: Hugo, Lake Elmo, Lino Lakes, Mahtomedi, North St. Paul, Oakdale, Stillwater, Vadnais Heights, White Bear Lake and White Bear Township. St. Paul Regional Water Services (city of St. Paul) is within the zone but did not attend the Jan. 10 meeting.

At the White Bear Lake City Council meeting Jan. 23, City Manager Ellen Richter informed members there are four provisions in the ruling that the DNR is moving forward to implement:

According to the judge’s order, when the lake is below 923.5 feet, residential irrigation is banned until it reaches 924 feet.

City Engineer Mark Burch noted that in the last 58 years, watering would be allowed in 17 of those years. The lake hasn’t been that high in 13 years.

The ban applies only to residential use. “That is how we interpret the ruling,” Richter said.

• A reduction in per-capita residential water use to 75 gallons per day. White Bear Lake is already below that number.

The court order requires that all existing permits include enforceable tools to ensure implementation. Enactment of the order will be completed within six months.

• A plan for partial or total conversion to a surface water supply.

Richter said the city intends to work with other communities to mitigate costs on developing a contingency plan, due to the DNR by Aug. 29. The plan must include a schedule for funding design, construction and conversion. The court noted that the DNR has ignored state statute requiring conversion plans for issuance of permits.

• A water supply plan submitted in March must include water conservation goals and collaborative efforts with other northeast metro communities.

The court ordered that all groundwater permittees in the 5-mile radius report annually to the DNR on collaborative efforts to develop plans to reduce water use.

“We’re happy to continue to look for ways to conserve water,” Richter said.

Other communities are looking at how to implement an irrigation ban.

“A residential irrigation ban will be impossible to enforce,” he maintained. “I get an upset stomach when I think about having to deal with imposing this order and prohibiting our residents from watering their lawns and, if it’s a dry month, watching their lawns dry up.”

The city of White Bear plans to consider an amendment to its irrigation ordinance in February. Richter said the city is compelled to have language in place by the end of February — six months after the ruling.

The first reading will include all irrigation, regardless of source.

Councilman Doug Biehn asked the city attorney if the court can tell the council how to vote on an irrigation ordinance. Attorney Andy Pratt said “no, I don’t think they could. You still have legislative power under city charter and state law to enact ordinances.”

A residential watering ban will include all sources, Burch noted: private wells, municipal water supply, a sandpoint, pumping from a pond. “All would be restricted under this ordinance,” he said.

“The DNR is required (to amend our permits) by the court. If they don’t change the conditions in our permit, they are in contempt of court. They explained that to us very carefully.”

Biehn commented that nothing is preventing the city from expanding the watering ban to include other entities. Councilman Dan Jones felt it only fair that if residents can’t water, than the city should go dry and so should the school district. “If we have that power, why not treat everyone the same?”

Meanwhile, Short says it’s the duty of the municipalities to respond to the DNR’s amendments to appropriation permits. “The DNR has adopted her order verbatim. I don’t think the lawsuit was meant to go this far.”

The city of Hugo is also within the arbitrary 5-mile radius, yet feels it has little impact on the lake.

City Administrator Bryan Bear points out a graph in the DNR’s transient model (shown here) that identifies municipal permits that have the most influence on the lake. Hugo’s is “very small,” he said.

Many of the permits are being regulated by court order but, according to the model, show very little ability to influence lake level, Bear pointed out. The model also indicated that irrigation is not a meaningful factor in lake level.

Bear maintains that Hugo is already doing “an extraordinarily good job” managing its resources and conserving through stormwater reuse.

He finds the irrigation ban “curious” since it only appears to apply to residential users connected to the city water supply.

As for finding an alternative water supply per the order, Bear noted that Hugo has no viable surface water source for total replacement. “It’s not possible for us without being completely reliant on someone else for water and that makes us uncomfortable,” he told council earlier this month.

The city of Hugo has lots of questions about this ban, added Bear. “It’s not practical and is counterproductive. It may discourage conservation. This makes very little sense to city staff.”