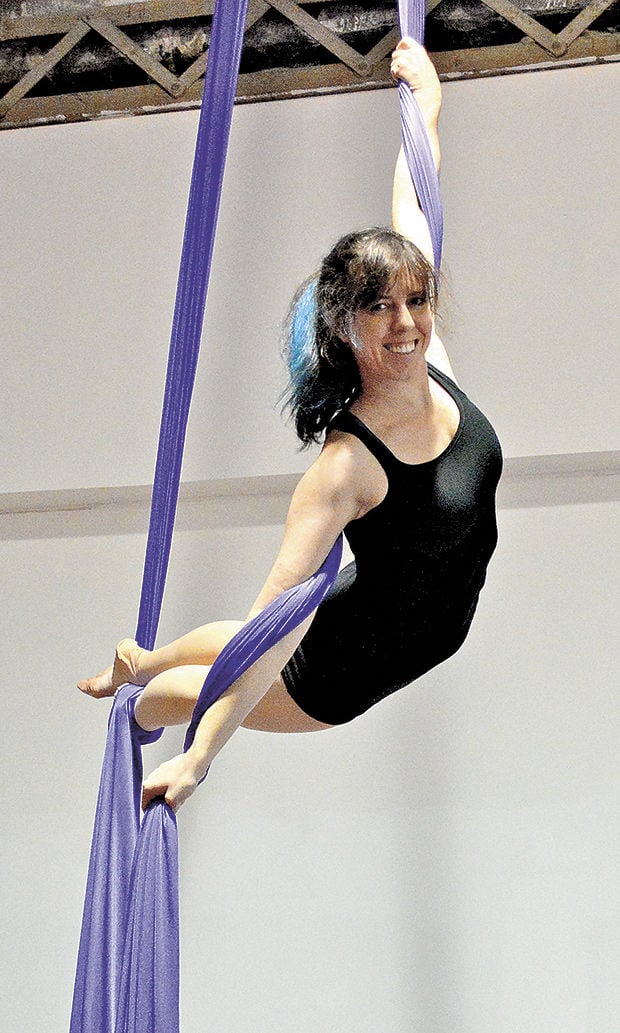 Stacey Kigner, who choreographs and performs in her own shows, used Kickstarter to produce her first aerial performance. 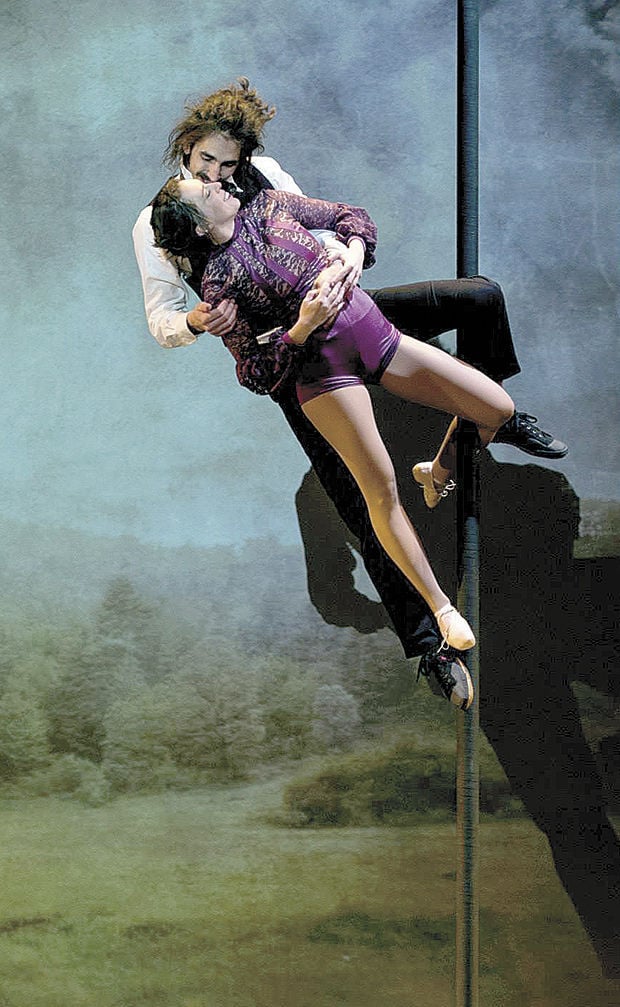 Stacey Kigner, who choreographs and performs in her own shows, used Kickstarter to produce her first aerial performance. In photo above, she performs with her husband on a pole in a show called Special Relativity. 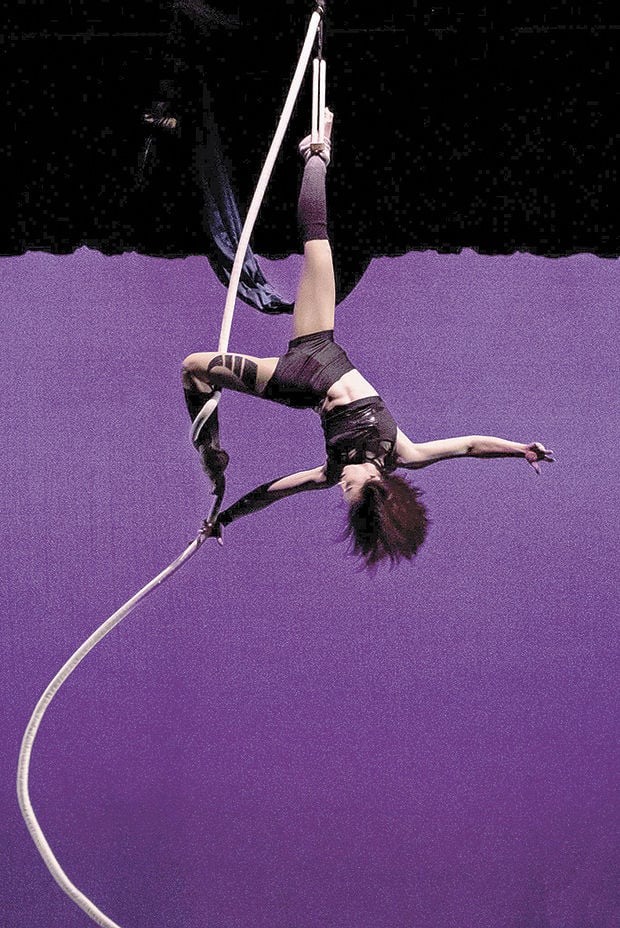 Stacey Kigner, who choreographs and performs in her own shows, used Kickstarter to produce her first aerial performance, twirls above the stage in a show called Special Relativity. 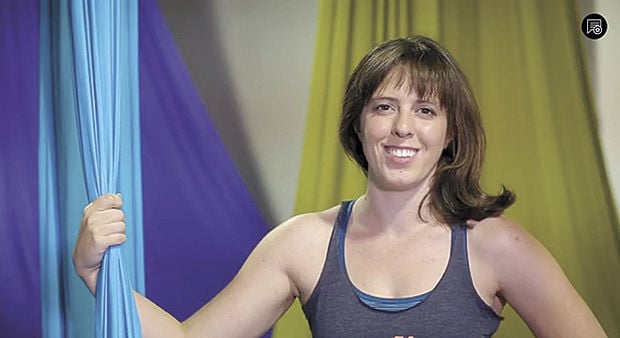 Stacey Kigner, who choreographs and performs in her own shows, used Kickstarter to produce her first aerial performance.

Stacey Kigner, who choreographs and performs in her own shows, used Kickstarter to produce her first aerial performance. In photo above, she performs with her husband on a pole in a show called Special Relativity.

Stacey Kigner, who choreographs and performs in her own shows, used Kickstarter to produce her first aerial performance, twirls above the stage in a show called Special Relativity.

Q: Tell us about yourself; how might neighbors and friends remember you?

After high school, I attended Vassar College in New York with a major in English in 2010. Growing up I played softball, soccer, and basketball and I hated them all. I enjoyed my time on various downhill racing teams a bit more. I spent most of my adolescence alone in my room either reading or writing. I left grad school shortly after starting for a number of reasons, but the final push was definitely my growing interest in aerial circus arts.

I am married; my husband is a mechanical engineer, but is also a circus performer. We met at a fire spinning retreat in Connecticut. I started the school with approximately $6,000 in the bank and $6,000 in expenses.

Q: How did you start in aerial performance and when did you decide to open the circus school?

I started taking aerial classes straight out of college after moving to Brooklyn. It was something I’d wanted to do since seeing Cirque Du Soleil in Minneapolis with my family in middle school. Unfortunately, at the time I don’t think my parents were aware that Circus Juventas (a school in St. Paul) existed.

When I started college, one of the first things that sprang out at me (literally, they did a surprise show) was the school’s fire spinning/circus club, the Barefoot Monkeys. During freshman week a few members came up to me and asked if I would try a partner acrobatics move with them because I was small. I ended up enjoying the partner balancing immensely and joined the club right away. I served on the executive board from sophomore year until graduation and was treasurer and later president.

The decision to open Air Temple was initially a long-term goal that became a very short-term goal since a lot of factors were lining up in a way that I hadn’t anticipated much more quickly than I thought they would.

Q: What are your overall career goals?

I’d like to make Air Temple a really concrete, well-rounded learning space for circus in New England. Right now we have a great aerial program, and I’d like to make our ground skills (for things like tumbling, partner acrobatics, and hand balancing) a much more fixed thing with those classes offered regularly at various levels. We’ve had some great ground instructors pass through, but I’d like to have a permanent program.

I’d also like to eventually step back a bit from day-to-day teaching and management, so that I can focus more on the artistic side of circus – writing, directing and performing in professional shows.

Q: What is the highlight of your career thus far?

Definitely being featured on (the PBS show) “Start Up” was a huge and very unexpected highlight. Seeing both of the shows that I’ve produced go off so well and be really well received has also been amazing.

The community that’s sprung up around Air Temple has been the best part of this endeavor. The student showcases that we do continue to be my favorite thing about the school. Seeing these students, a lot of them who come in very nervous and weak and not trusting their own bodies, perform a piece that they’ve written themselves and put months of work into is absolutely amazing.

I would say the logistics have been the most challenging. Creating a circus community where there isn’t one means a lot of potential business opportunity, but it’s also very hard.

Also trying to find a space that I can afford, versus what the studio requires (a large open square footage, generally ceilings in excess of 20 feet) has been really challenging. We’re expanding for the second time, and hopefully the last time. Our new space is amazing, and a huge step up, but it’s also extremely expensive.

Q: How did you come up with the name Air Temple Arts?

It is a reference to one of my favorite shows, “Avatar the Last Air Bender.” In it there are a group of people called Air Benders. They can control the element of air and higher-level ones fly around and such. Anyway, they lived and trained at these places called Air Temples and I thought it was really fitting, and I didn’t want a more typical name that was boring but descriptive of what we do. P

Q: What do you teach at the circus school? You have also launched a new production company —  Cirqularity - tell us about that.

The goal with Cirqularity is to have a bit of separation from Air Temple, have it be a more professional thing, so that people recognize the difference between a student show and a professional show. There is some overlap of course, though. A show that I’m putting up in February is a collaboration between Air Temple and Cirqularity. It’s a professional show, but I held auditions, so some of my very talented students are performing in that.

Q: I understand you used Kickstarter to produce your first show. Did that go as planned?

I did! And I used IndieGoGo to finance my next show. Both were really successful and met their fundraising goals, and also did really well in terms of ticket sales.

Both were definitely great experiences, but I won’t be using crowdfunding for future shows. Crowdfunding is a ton of work, especially with the rewards, and there’s only so many times you can ask your community for money. Special Relativity did really well with ticket sales though, so I managed to start a nest egg for future shows, which was the goal.

Q: Do you have advice for area students considering a similar career?

As far as performing, it’s important to realize that it’s extremely competitive, and that you will have an “expiration date,” as ridiculous as that may be. For something like circus you also have a pretty high risk of injury, so I think it’s important to have a fallback plan, but hopefully one that includes your passion. I think having a college education these days is also extremely helpful.

As for starting a business, just do it, but make sure you’re doing it smart! I did a lot of research, talked to people in the field, and put together a business plan and crunched a lot of numbers before going for it. When I had done that, and it seemed like it was good, but I was still waffling and going “maybe in five years,” that’s when I stopped and said “wait, what exactly is stopping me from doing this now?” and the answer was “nothing.” That’s when I decided to just go for it.

I think owning a business is great if you want to be in charge. It’s definitely not a safe career path though, and I find it very stressful most days.

Q: What do you like to do when you're not working? Do your parents still live in White Bear? How often do you come home?

Right now I’m never not working! I didn’t realize owning a business that I would actually do the least amount of work when I was just starting out. The bigger Air Temple gets the more work I have. I did just hire a studio manager, though, so I’m very excited to maybe get some of that free time back.

In the last two years, about 90 percent of my free time went towards writing a book, called "The Sum of All Paths," which I just published in September. Any free time I have I try to be writing, but I also love to travel, and those generally go together pretty well.

My parents still live in White Bear and they are upset because I haven’t been back to visit in over a year. Their names are Laurie and Jonathan and they own New Directions Inc.

Q: Do you miss anything about White Bear or Minnesota?

White Bear is such a great place, and Minnesota is definitely the best state, so I’m in a semiconstant state of homesickness. I pretty much miss everything except those days below zero in the winter!

Q: When did you move to Connecticut and why did you pick the state to start your business?

I moved to Connecticut when I left grad school to see if I could make this relationship with my now-husband work, and to see how the circus thing would pan out.

It was definitely a pretty rash decision, I think we’d been dating maybe a month and I’d just been doing aerials for a few months, but I absolutely needed to get out of New York City; I couldn’t stand it. I was trying to decide between Connecticut with Nick, and Boston, and I picked Connecticut because Nick said I could stay with him while I figured out my job situation, and fast forward five years to now.

I chose Connecticut because that’s where I was living, and was in no position financially or logistically to move, and it was the only state around without a circus studio.

Q: Per-capita income in Connecticut is the highest in the country, making the state a great environment for startups to flourish. Can you comment on that?

Um, I would say that the opposite is actually true — that having the highest per-capita is part of what makes it really hard for startups.

I’ve never once gotten a response in any attempt to take advantage of the services that are supposedly offered to small businesses through the New Haven small business service center, and there was a point where I was calling every day.

That being said, we’re actually moving one town over to Woodbridge and they’ve been really welcoming and we’re not even there yet! The Woodbridge Economic Development Committee has actually already reached out to me, so I feel like the move was definitely the right call.