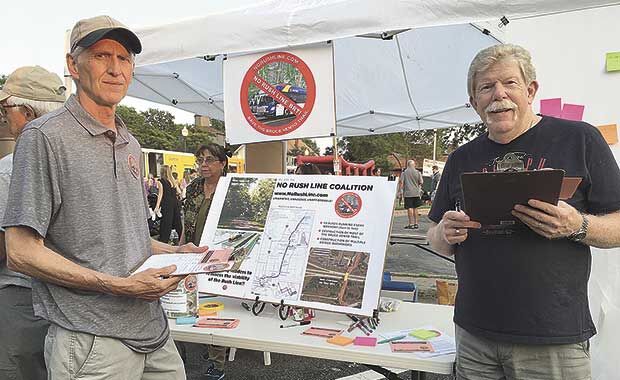 Members of the newly formed No Rush Line Coalition, Tim David (left) and Greg “Jiggs” Lees spent the first Marketfest of the summer collecting names for a petition to stop the project. They also plan a booth July 15 and July 29. 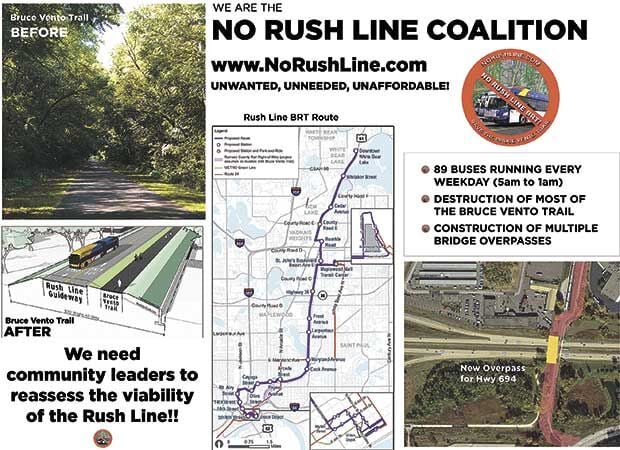 This poster at the coalition’s Marketfest booth includes before and after depictions of the Bruce Vento Trail.

Members of the newly formed No Rush Line Coalition, Tim David (left) and Greg “Jiggs” Lees spent the first Marketfest of the summer collecting names for a petition to stop the project. They also plan a booth July 15 and July 29.

This poster at the coalition’s Marketfest booth includes before and after depictions of the Bruce Vento Trail.

WHITE BEAR LAKE — Calling the Rush Line rapid transit project a "bus invasion," a small coalition is working to stop it. Or to at least have the need for a $457 million project reassessed.

One of the organizers is Tim David, a 50-plus-year resident who didn't realize the extent of the Rush Line opposition until he read letters to the editor in the White Bear Press.

"I contacted a collection of people around here, including letter writers, council members and business owners. They are adamant that the bus rapid transit project isn't a fit for the community," David said. "We decided it was important to get our message out so people understand what this means."

A former project analyst for the city of Minneapolis, now retired, David said the group, which calls itself the No Rush Line Coalition, or NRLC, isn't trying to stop public transportation. "That's important. But we think this is a project initially designed back in 2015 that we don't feel is being responsive to community pushback. We think (pre-pandemic) ridership numbers are outdated."

The NRLC provides a list of "Pain Points" that includes statistics like number of buses in downtown White Bear every weekday — 89; buses downtown every Saturday — 76; and buses downtown every Sunday — 68. At a capacity of 200 passengers per bus, that's 17,800 people a day during the week, David pointed out.

"It's overbuilt and beyond common sense," he said. "It's just not appropriate post-COVID.

"The American Public Transportation Association said transportation will come back differently," David noted. "We have to adjust to changes. That is why we're asking leaders in our community to reassess. There is a better way to invest in public transportation than an outdated mega bus line."

Also on the "Pain Points" list is elimination of 8 miles of green corridor that is the Bruce Vento Trail. According to the coalition, the segment will turn into a 100-foot-wide swath to accommodate a two-lane bus route and adjoining sidewalk.

In the opposition's court is City Council Member Bill Walsh, who told the group he plans to bring a municipal consent vote before council. "Leading up to that vote would be community discussion on the project," Walsh said. "One of my objections to this whole process is I don't think we've had a communitywide discussion. We are making these little decisions before we have the big conversation about ‘Do we want this?’”

Does he think the project can be stopped? "Yes, if people are listening," Walsh replied. "The county is the main driver. If commissioners see cities along the route saying no, it can be stopped. There will  still be an application for funding to the federal government. Again, if there is public opposition along the route, you'd think that would weigh in on the application."

David isn't so optimistic. "We've talked about whether we can stop it. The Metropolitan Council (which will take over the project) is a powerful force with very little accountability and transparency. We're not sure we can stop them but we hope to impact the size and design and cost," he said.

County Commissioner Victoria Reinhardt assured that reassessments will happen as the project moves further along. "I agree, we need answers to ridership questions and we will get them," said the commissioner. "But you don't stop and go backwards. We rely on the scientists and experts to give us the information, and so does the federal government. I'd like to add that this process started in 1998. It has not gone fast or without intense discussion, observation and community input."

Reinhardt iterated that the Met Council will be making final decisions on the project, not the county. "That is the way the Federal Transit Administration set it up to make sure the entire region is being served," she explained.

The project grabbed another coalition member's attention when it morphed from a commuter train to Rush City to a rapid transit bus line more than a decade ago. Greg Lees grew up in White Bear Lake, moved away, and returned years later to raise a family. "People move to White Bear because it's historic and quiet," he said. "Now they're telling us we have to deal with bus rapid transit and the crap that comes with it. Eighty-nine buses a day is insane."

At this point, the dozen or so members of the multicity coalition is working to get their message out to the broader community in hopes people will contact their elected officials with concerns. To learn more about their efforts, go to norushline.com, which also contains a petition for change.

The timeline for the 15-mile bus line between downtown White Bear Lake and Union Depot in St. Paul remains the same, with the environmental assessment now under review by the federal government and the county, which will split the project cost. The document and information on the project can be viewed at rushline.org. Construction is slated to start in 2024 and service projected to start in 2026. Oversight for the project will transition from the county to the Met Council this fall.

White Bear Lake is not a small town anymore, it has a population of 25,000. It's also a destination with lots of great restaurants and retail. People want more options to get around the metro region than just driving a car. This NIMBYism needs to stop, if we want to be a competitive region in the United States, we need a network of LRT/BRT that can get you almost anywhere!