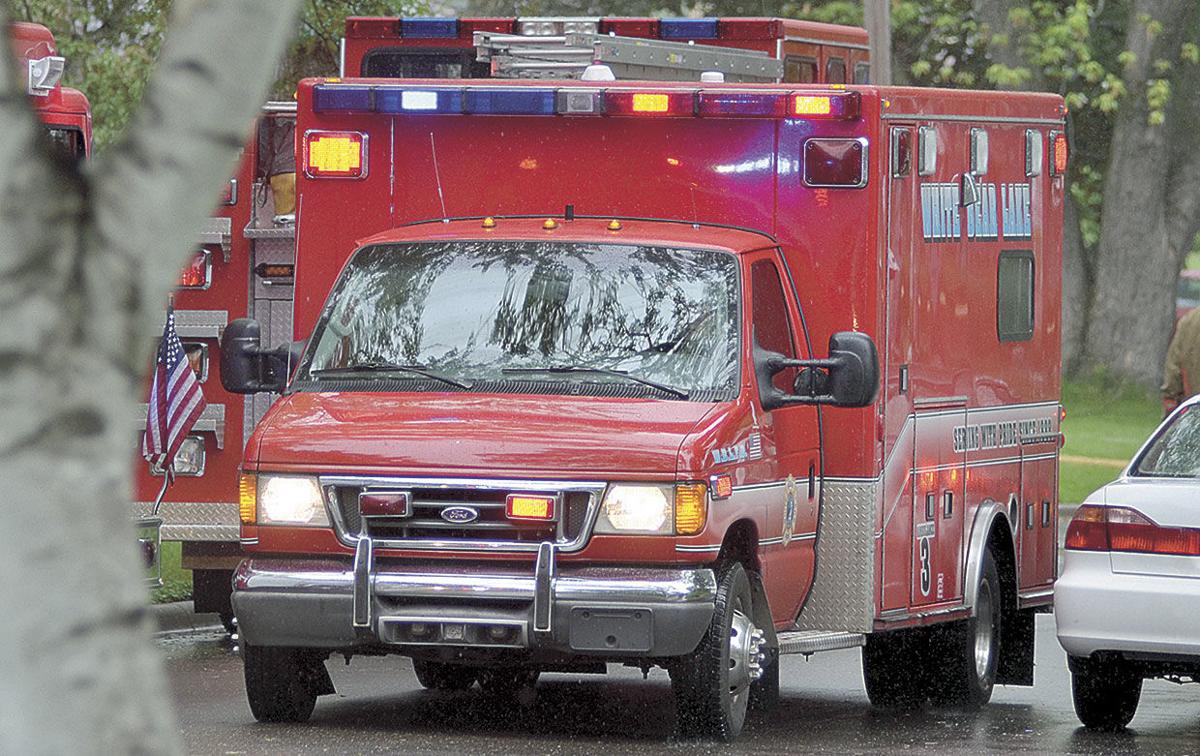 The City Council is considering a 3% rate hike for ambulance rides in 2020. 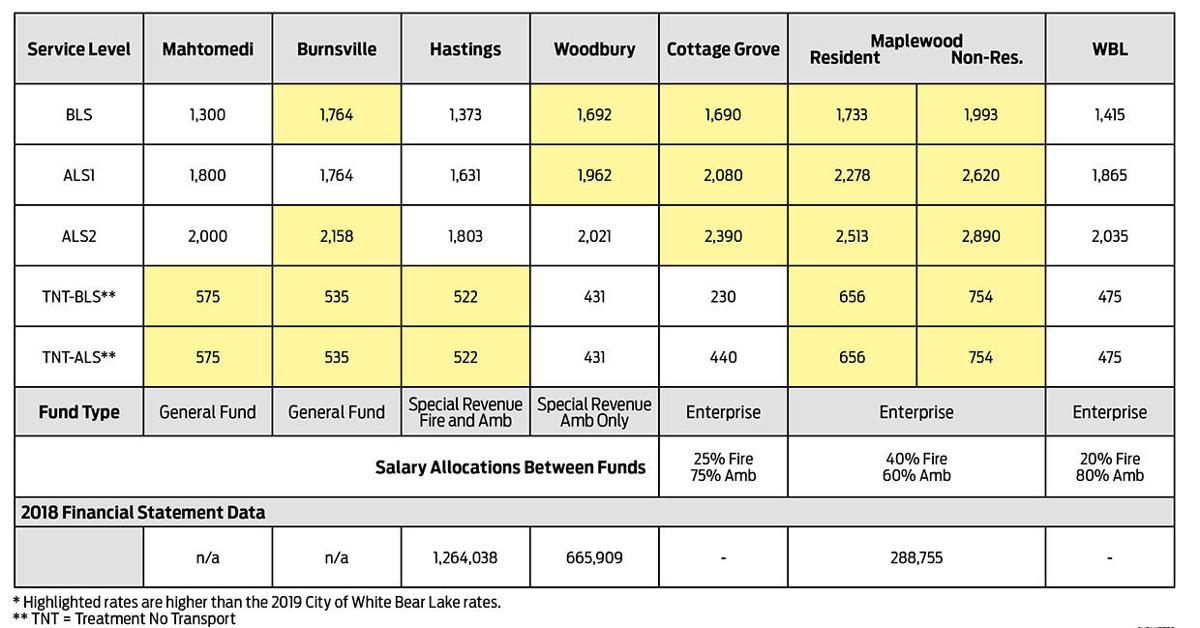 White Bear Lake does not charge the highest or lowest rate of surrounding communities.

The City Council is considering a 3% rate hike for ambulance rides in 2020.

White Bear Lake does not charge the highest or lowest rate of surrounding communities.

WHITE BEAR LAKE — As one resident complains of sticker shock over an ambulance bill, the city is working to juggle costs.

“If I knew it would be this much, I would have called Uber,” grumbled Betsy Larey, a White Bear resident who became violently ill last July and called 911. She was partly joking, of course, since Larey couldn't get off the floor. She spent a week in the hospital.

The bill for her 9-mile trip to Regions was $2,186. It was tough to swallow, said Larey, whose insurance carrier would only pay $549.

So, she called the city.

Finance Director Kerri Kindsvater explained that service fees charged to patients, referred to as transports, need to cover operational and capital equipment. As calls for service continue to rise, so must rates.

“Our goal is to have revenues cover expenditures; we barely break even,” Kindsvater said.

The rub comes from the fact 70% of ambulance calls are for people on Medicare or Medicaid.

So demographics make a difference.

City Council will take up the fees issue in a workshop this month after staff reviews year-end data under the new paramedic/firefighter model, which has been in operation a year.

A 3% rate hike is recommended.

As the accompanying spreadsheet shows, White Bear Lake does not charge the highest nor the lowest rates. The city pays for ambulance service through an enterprise fund, meaning it is not supported through property taxes, unlike Hastings or Woodbury, for example. Mahtomedi's ambulance is supported by the general fund, most of which is paid for by property taxes.

Enterprise funds are operated like a private business, explained Kindsvater. Revenues come in from user fees to pay expenses and make capital improvements or buy equipment, like the new $238,000 ambulance the city purchased.

Just because some cities have lower fees doesn't mean they're operating more efficiently because of how they split out expenditures, added the finance director.

The ambulance fund pays 80% of the salaries for White Bear's paramedics/firefighters because 80% of the calls are medical. The remaining 20% are fire calls paid by the general fund; again, through property taxes. The fire chief's salary is split 50-50 between ambulance and fire.

So far in 2019, ambulance crews have responded to 776 basic life support (BLS) calls; 1,596 advanced life support, level 1 (ALS1) calls, and 25 ALS, level 2 calls, which are much more serious. Nineteen are listed as “treat no transport.” Crews also respond to calls for patient lift assists. There is no charge for these calls at this time. So far, there have been 218 calls for assist in 2019.

In anticipation of the council's future discussion, Larey wrote them a letter saying she didn't feel it was right that people with private insurance pay for people who don't or won't pay their bill.

“There are a number of people with private insurance, or no insurance, who just refuse to pay,” she wrote. “It took me awhile to figure out the reason my bill was so high is because the few of us with private insurance are paying for the Medicare people and the refuse-to-pay group.” She thinks that is unfair and would like the cost spread among taxpayers, just like a fire call.

“I am lucky enough to be able to pay this part of the bill myself. Are others able?” she asked. Do we want people to hesitate to call 911 because they are worried they may not be able to afford the EMS fees?”

Larey said she mistakenly assumed that since 911 is a city service, it would be covered by taxes.

Also important to note, users can't price shop for ambulance service. Once a call is made to 911, there isn't a choice, Kindsvater said. Users must use whatever service is in their district.

“We recognize there isn't room to do much with rates. That's why we're recommending only 3%,” she said. “We always have to keep an eye on that fund to make sure it's viable.”

Added Kindsvater, “We are trying to run as lean a service as we possibly can to make it work. Though it is an expensive bill for some, like in Betsy's case, she had great service. The responders were timely.”

Increasing deductibles is making fee collection more difficult for service providers, continued Kindsvater. The city tries hard to work with people delinquent on their bill. After three attempts to devise a payback plan, the city sends the bill to collections. The state is also notified because of a program called revenue recapture. If people have a refund coming on their income taxes, their Social Security number is flagged and the refund is given to the city. It continues until the debt is paid.

Sometimes the city has to write a debt off. “That is rising,” Kindsvater said. “We have 160 unpaid this year — close to $300,000. These people have no insurance. They'd rather pay the fine for having no health insurance than pay the bill.”

Hiniker emphasized that people should never think twice about calling for an ambulance. “If you don't need to be transported, you won't be, and you're not charged,” she noted. People can also refuse transport.

As for Larey, she wants residents aware of the billing policy. “So there's no surprise,” she said.

Typical calls and how they’re coded

Injuries that fall under BLS:

Injuries that fall under ALS1:

Injuries that fall under ALS2:

Services that include three or more separate administrations of one or more medications by intravenous push or infusion; of procedures such as defibrillation, endotracheal intubation, chest decompression, central venous line, intraosseous line

Exactly how an injury is coded for billing is defined by Regions Hospital personnel.

So the question white bear lake residents should be asking the city council is, why can’t the city use property taxes to fund the ambulance service, like many other surrounding cities do?